Q. Is alcohol a growing problem among women?

A. Yes. More women are drinking than ever before. In Canada more than six women out of ten are drinking today; in the U. S. not quite half the adult women drink. Along with the increase in moderate drinking among women, there also seems to be a rise in the number of excessive drinkers. There is now one female alcoholic to every five male addicts. In the future, I think this difference will be narrowed.

A. There are a number of reasons. Perhaps one of the most important is that women are under stress because they’re badly confused about their role in society. While North American women enjoy greater freedom than women anywhere else in the world, the men often have a rather distorted view of what constitutes equality of the sexes. They’re willing to accept women as equals if women are willing, to a large extent, to act as men in disguise. This becomes most apparent if you examine the situation in some offices or institutions where men and women work side by side — some women tend to adopt a man’s way of thinking. On the other hand, among all-female staffs I have noticed that women tend to remain feminine and maternal.

The drinking habits of contemporary North American women reflect the shock resulting from freedom very swiftly acquired, the confusion between masculine and feminine roles, and a tendency to assume masculine attitudes in order to compete successfully with men. The road from slavery to freedom is a painful one. And, for women, alcohol may relieve the discomfort temporarily.

A. I've noticed a number of significant differences. It generally takes a man ten or fifteen years of serious drinking to become an addict. A woman is more likely to travel the road from moderate to excessive drinking in a few years. For many women the menopause is a period of depression, and they sometimes seek relief in

drink. Again, from time immemorial, women have used alcohol to alleviate the pain of menstruation.

Women are more prone than men to link their serious drinking with a crucial event in their lives — a surgical operation, a miscarriage, a divorce, loss of a job or an unhappy love affair. It’s the other way around with men. Their troubles — the loss of a job or poor health — more often seem to have been a result of drinking.

I’ve also noticed that many female addicts were first taught how to drink by a husband who was a heavy drinker. The woman is at first confident that she can handle the situation by drinking with her husband — a solution that leads to her downfall. On the other hand, not many men married to alcoholic wives will drink with them.

Female alcoholics are more readily condemned and ostracized than their male counterparts. Inebriation also represents a greater personal threat to a woman. Deprived of her judgment, she loses one of her most precious gifts: the freedom to choose, with dignity, the male companionship best suited to her.

Q. Does alcohol have a place in social relations between men and women?

A. I think so. Moderate drinking helps strip away the hostile attitudes that so often exist between the sexes. When a man and woman have a leisurely drink together, the edge of hostilities is blunted, misunderstandings are bridged.

I recall the magazine advertisement that suggested that champagne at breakfast might be an effective remedy for a commonplace complaint: early morning discord between man and wife. This was not the hair-of-the-dog treatment. Alcohol was simply being recommended in the place of sedatives, tranquilizers or even psychotherapy. Whether or not we approve of this use of alcohol, we can’t deny that the anxieties of our age may broaden its usefulness for relaxation or even for sheer pleasure.

I should add, however, that there’s something more than anxiety and hostility in the modern emotional climate that impedes a warm and friendly relationship between the sexes. A tenderness taboo exists.

GIORGIO LOLLI, MD, interviewed here by Maclean’s associate editor Sidney Katz, is one of the world’s leading authorities on the social effects of alcohol. He recently founded the International Centre for Psycho-Dietetics, New York and Rome.

Q. Can you explain what you mean by llu term “tenderness taboo"?

A. In our society there is a widespread taboo against expressing warm and tender feelings toward another person. Most of us have a powerful craving to express and receive expressions of love but we repress it. partly through a conditioned fear of bei.ng rebuffed. The tenderness taboo creates inner loneliness and turmoil — unpleasant feelings that can be temporarily relieved by the use of alcohol.

Q. How do you explain such a widespread taboo on tenderness in our present society?

A. As we become more highly educated, wt seem less able to react, emotionally, in an uninhibited way. We are the products of a system of education that uses the scientific approach. \n other words, we look at things with an air of detachment, of objectivity.

For many years now. mothers have been dependent on scientific books on child raising to help them rear their children. This is worthy of praise if scientific knowledge does not muffle warm feelings. It is too bad when, instead of responding in their own way to situations involving their children, mothers become nothing more than purveyors of somebody else's ideas on how to bring up children.

Teachers tell me that parents don't want to be told that their children are kind and gentle and affectionate. They want to hear that their youngsters are able and intelligent so that they can later compete in the professional or business world. Competition is often the antithesis of tenderness.

Under the influence of alcohol, many men and women educated in this vein find they can wake up to life — they can feel tender emotions for another person and express them. This result may. in time, lead to excesses with alcohol.

(). Does alcohol have a place in sex relations?

A. By soothing anxieties and fears, alcohol. in moderate amounts, may encourage physical and emotional closeness between a man and a woman. In these circumstances, it neither stimulates nor lessens desire — it only removes some obstacles to the fulfillment of a desire already present.

I'd like to make it clear that this par-

In Canada and the United States, the search for fun has brought us to the “Friday-night trespass”

ticuiar use of alcohol is recommended only when it applies to a legitimate sexual union. In such cases, the use of alcohol favors a quality of love that has a meaning much deeper than mere sexual union. I also think that this use of alcohol should be temporary and experimental. It should prove to the individual that he or she can express tender feelings, and what's more, once expressed, these feelings can be reciprocated.

Alcohol and sex are an explosive mixture. Unhappily, alcohol is all too frequently used in an unhealthy way for sexual purposes.

Q. Can you describe some of these unhealthy uses?

A. Alcohol should not be used as a religious-ethical anesthesia, that is. to give the individual courage to engage in sex activities not acceptable to him or her while sober. Many women alcoholics I’ve known first started drinking to overcome religious and ethical prohibitions. It doesn't work. The relief is only temporary. When the drunkard sobers up. he or she is sharply stung by conscience.

On a more practical level, large amounts of alcohol are not compatible with a satisfactory sexual performance. Heavy drinking renders a man wholly incapable; for a woman who’s been drinking heavily, the sex act becomes loveless, aloof, detached and perfunctory.

There are other unhealthy uses of alcohol in relations between the sexes. Sheer violence is one; it expresses the desire to overpower other people physically. There is also the drinker's unrealistic overestimation of his own charm and resources. Then there are the fantasies of the middle-aged, mildly inebriated woman who views herself as a seductive siren, and the mistaken judgment of the woman or man who believes she or he is brilliant and witty anti the centre of attraction.

Q. What is the relationship between alcohol and homosexual behavior?

A. There appears to be a significant connection. The person with homosexual drives, when inebriated, often performs acts his conscience would forbid him when sober.

I would suggest that people with homosexual tendencies shouldn't drink at all if these tendencies are to be kept in check.

This advice is particularly of value to young people who nurse only latent homosexual inclinations. During the uncertain teenage years, the youngster is anxious for acceptance and thirsty for prestige and power. The homosexual world may appeal to him as a brilliant spiritual brotherhood or sisterhood of the chosen few where some of his aspirations may be realized. Thus, he may gladly pay the initiation fee. and, to alleviate the guilt that goes with it, drink heavily. Alcohol also strengthens the homosexual’s belief that he is being accepted. Young men and women on the brink of adulthood should be aware of these dangers.

Q. In discussing sex and alcohol, you have used the expression "Friday - night trespasses." What do yon mean by this?

A. In Canada and the United States, the weekend i;, the time set aside for fun. It is a festival, celebrated fifty-two times a year. The festivities usually get started on Friday night. Usually, the two sexes celebrate together. Often large quantities of alcohol arc consumed. Fun is desperately sought after as an escape from the vexations and frustrations of a hectic week. Given enough to drink, the celebrants trespass into the land of inebriety. It is a land where everything is clear and simple, One is capable of simultaneously experiencing diametrically opposite emotions. A drunk can feel secure and in danger, feel meek and grandiose, feel attracted to people of the same and opposite sex. All the pairs of opposites that can't be reconciled in sobriety find their pleasurable fulfillment in inebriety.

It is not my intention to offer a blanket condemnation of the Friday-night ritual. Moderate drinking on these occasions promotes companionship between the sexes and offers relief from the drab chores of the workday week. The overwhelming majority of drinkers who, once in a while, take too much alcohol do not represent serious medical, psychiatric or social problems. However, there's a real danger for the minority who become seriously inebriated, week after week. This may be the beginning of the dangerous descent into the abyss of alcoholic addiction. ★

This discussion is based on Dr. Lolli’s book, Social Drinking: How to Enjoy Drinking Without Being Hurt by It; World Publishing Co., I960 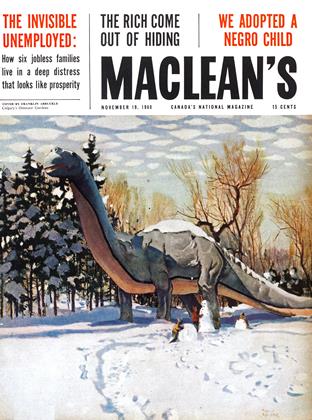