Click to View Article Pages
Urbiculture is easy, but what is biosophy?

WASHINGTON - The yellow pages of the telephone directory in this strange and wonderful city list more than eleven hundred "associations.”

Many have names that baffle, mystify, titillate the imagination and stir the curiosity — names like the Society of the Renaissance, Project Hope, the Privazone Council of America, OPEDA, the National Council on Aerial Phenomena, AOPA. Neighbors Incorporated. the National Institute of Urbiculture, the Colonial Dames of the Seventeenth Century and the Biosophical Institute.

Some of the names so fascinated me that I decided to set aside a day to find out what they stood for. I spent this day on the telephone, asking questions, and wound up fully convinced that Americans are the world's greatest joiners, dreamers. planners, ancestor worshippers, do-gooders, political axe grinders and supporters of lost causes.

I learned, among other things, that —

★ Urbiculture (which isn't in my dictionary) is a new word for the scientific and orderly use of urban land. The Institute of Urbiculture. financed by enthusiasts and wellwishers. is trying to persuade the U. S. government to establish a full-fledged department of urbiculture, which would be to cities what the department of agriculture is to the country.

★ Chunks of ice weighing twentyfive or thirty pounds occasionally drop from the sky. This bit of information was provided by the National Council on Aerial Phenomena. which has a membership of four thousand five hundred in thirty countries and devotes most of its energy to checking reports of flying saucers. Richard Hall, its executive secretary, told me there is no doubt at all that unidentified flying objects, from an unknown source, have been seen by hundreds of sane, sober human beings, among them trained observers assigned by several air forces to scan the sky.

★ Women who want to be Colonial Dames of the Seventeenth Century have to be able to produce pedigrees showing that their forebears settled in America by the year 1700. They have a slight tendency to look down on the far more numerous Daughters of the American

Revolution, who only have to have forebears who fought in the War of Independence anil who busy themselves passing political resolutions while the Dames go in for such gentle pursuits as caring for the grave of Pocahontas, who was buried in England.

★ One of these years, and perhaps fairly soon, there will be an amendment to the U.S. Constitution. It will insert the words “and women” after the word "men” in the sentence that begins: "All men are created free and equal. ...” The amendment will be the result of the dedicated efforts of the National Women’s Party, which dates from 1848. reached the peak of its glory by winning a vote for women in 1921. and occupies the oldest house in Washington.

★ Project Hope is a hospital ship, complete with doctors and nurses, supported by voluntary contributions from Americans. It cruises from one underdeveloped country to another to treat the sick.

★ Thousands of veterans of the Spanish-American War still survive. They belong to the United Spanish War Veterans and like to sit around their clubrooms reminiscing about Teddy Roosevelt and punctuating their conversation with the word “bully,” used in the half-forgotten slang sense.

★ The National Beauty Culturists League is a fancy name for a trade association that promotes the interests of barbers, male and female.

★ Neighbors Incorporated, financed by contributions from the public, has taken on the unusual but useful task of proving to white property owners that when a Negro family moves into their neighborhood it doesn’t automatically mean that the value of their property will drop, they don't have to sell out, pack up and go elsewhere, and the chances are the Negroes will be nicer neighbors than they had before.

★ There are political candidates who, when they least expect it, suddenly have a bundle of money handed to them for campaign purposes. They are beneficiaries of an influential outfit called the National Committee for an Effective Congress. This body has observers who keep a close witch on all candidates for Congress. It is non-partisan and helps the men it considers best, whether they be Republicans oi Democrats. The men it considers best generally favor freer trade, foreign aid, civil liberties and a vigorous defense policy. One of the candidates the NCEC has endorsed. Senator Wayne Morse, said in 1556 that the organization's help was "indispensable to my success.” If two opposing candidates hold similar views on these subjects, the committee stays out of the picture. It also stays out of the picture if the man it regards as good has no chance of defeating the man it regards as bad. But if the two men are running neck and neck, the committee will do what it can to push the man it prefers into the lead.

★ The way you rate a politician all depends on your outlook. Americans for Democratic Action, "pledged to restore liberalism to the United States.” recently gave Kennedy a rating of one hundred — a perfect score — while Americans for Constitutional Action, “dedicated to the preservation of the principles of the American Constitution," gave him a rating of only twelve. Each of these bodies, one liberal and supported by labor unions and a substantial assortment of intellectuals, and the other ultra-conservative and supported largely by wealthy businessmen, has a complex system of appraising

members of Congress. The systems are similar, since the first step in both is to determine which issues before Congress are "basic” and the value in points that should be attached to them. This done, congressmen are rated by the way they vote on the basic issues. But Democratic Action and Constitutional Action see things so differently that a vote that might win a man points from Democratic Action would probably prompt Constitutional Action to penalize him.

★ Federal Union Incorporated, a nonprofit educational organization, is still hammering away at an idealistic scheme of world government. Temporarily, its goal is merely a federation of NATO countries, for it realizes that Russia and China may not care to join the federation right now, and that the NATO countries may not care to have them join. But the old dream of real world government, set out twenty-one years ago by Clarence Streit in his book Union Now, is cherished by many an American.

★ The Privazone Council of America, which I guessed in advance would he an idealistic group with a plan for promoting peace by dividing the world into zones, is actually a group of plumbers devoted to selling the idea that we should have more and better privazones. Privazone, translated, is bathroom.

★ OPEDA, which sounds like a word used by a magician to make a woman vanish from a locked cabinet, simply stands for Organization of Professional Employees of the Department of Agriculture.

How fast old Simla's friends would sack him I j there were no dads to hack him.

★ The Society of the Renaissance, which I guessed beforehand had been formed for the study of Renaissance art, is concerned. instead, with strengthening international amity by cultural exchanges, and bringing about a rebirth of "spiritual values and common sense” through "cul-

tivated intelligence, a boldness of artistic endeavor, intense civil life, and the praise and patronage of the creative individual.”

★ The Commission on Accreditation of Service Experiences does not provide documentary evidence of the veracity of the tales veterans tell of hair-raising adven tures in foreign theatres of war. Its prosaic function is to evaluate the courses a man takes in the armed forces in terms of civilian education.

★ The American Federation of Astrologers has members in twenty countries, and. by the reckoning of Paul R. Grell, the executive secretary, at least a thousand astrologers in the U. S. read horoscopes for a living. Grell assured me that their clients include famous congressmen, said that the Library of Congress has more books on astrology than on any other single subject, and claimed — contrary to accepted belief — that astrology

is the oldest profession in the world.

I called other associations—quite a lot of them—but I’ve mentioned enough to make the point that, to coin a phrase, they run the gamut from AAA to Zionist. There were a couple I wanted to call, but they weren't listed—one of them Living History, which makes the Washington papers once in a while because its members parade around in Civil War uniforms and relight the battles of the 1860s with blank cartridges, and the other a Committee to Eliminate Income Tax. which is a first-rate idea if it will work.

I met other frustrations in my day at the phone. AOPA's line was busy whenever I rang it. so I stili don't know what it means, and when 1 rang the Biosophical Institute a metallic voice said: "I’m sorry, the number you have reached has been disconnected."

I thumbed through the dictionary for biosophy. It wasn't there. But you can't win them all. ic 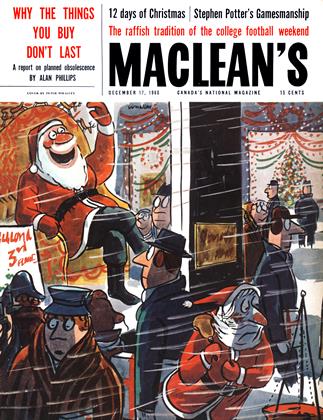