THE ISSUES on which governments in Canada are elected and defeated aren't necessarily those produced by their political rivals. The voters make the issues.

This truth has been firmly established in Canadian political history, but as usual it is being ignored by the opposition.

While the Liberals and CCF continue to hammer away at the government’s new anti-unemployment proposals, confidently expecting to make them the issues of the next federal election, John Diefenbaker has quietly switched much of his political concern to solving, or at least smoothing over, this country’s complex agricultural problem.

If any doubts remain about the prime minister’s genius for analyzing the spots most likely to burst his political balloon, they should be dispelled by a closer look at the significance of this private shift in emphasis.

Only twelve percent of the Canadians of voting age still live on farms. But a close study of representation in the House of Commons shows that nearly sixty percent of its members sit for rural areas. The smashing of Quebec’s Union Nationale electoral machine by Jean Lesage, and the Tories’ ineffectual political handling of French Canada since the 1958 victory, have convinced Conservative strategists that nothing they can do between now and the next campaign will win back this key province. It will be mainly the support or loss of the farm vote that will decide the outcome of John Diefenbaker’s next journey to the polls.

Superficially, this shouldn’t be any problem for a prime minister who has spent most of his life championing the prairie farmer in Ottawa. Diefenbaker was so perfectly atune to the resonance of the westerner’s long frustrations that in the 1958 election the three prairie provinces gave him 47 of their 48 seats. In return, he gave them five voices in the cabinet (including the prime ministership), the largest representation the west has ever had.

The Tories have ladled out nearly half a billion dollars to Canadian farmers since they took office. Their various programs and subsidies will this year amount to nearly four times as riiuch as the farmers received during the last year of the Liberal administration. Diefenbaker has even given his home province the economically doubtful South Saskatchewan Dam.

Despite these efforts, disillusionment with the prime minister is nowhere more intense than in the prairies.

The leaders of many western farm organizations talk of Diefenbaker as if he were a traitor.

At least part of the trouble was Diefenbaker’s choice of Douglas Harkness as his first minister of agriculture. A Calgary schoolteacher who had been a dour backbencher for a dozen years. Harkness began immediately upon his elevation to tell the farmers bluntly the kind of unpleasant truths they had never heard from Liberal James Gardiner during all his twenty-two years in the portfolio. With tactless courage, Harkness turned down the deficiency payment request so dear to the farm leaders before they could even properly present their case. In speech after speech he warned farmers to cut their production voluntarily if they wanted continued price support.

“People here voted for John because they thought he’d change things,” I was told during a recent visit to Regina, by A If Gleave. president of the Saskatchewan Farmers’ Union. “But nothing has changed. Our wheat problem is more serious than ever.” Gleave and leaders of other farm organizations are also becoming increasingly concerned over the effect on wheat exports of the government’s tariff increases against British woollens and cars.

But the most important reason for the prairie disillusionment is that Diefenbaker’s messianic fervor instilled in western farmers the certain expectation that his election would make them richer. The unabated squeeze between lower cash income and higher operating costs has instead made them poorer, while farmers in eastern Canada have been improving their financial position.

When Diefenbaker last month switched Alvin Hamilton from northern affairs to the agriculture portfolio, many people were astonished by the promotion to such a senior post of a junior minister whose record before the 1957 sweep was six losses in federal and provincial campaigns.

They shouldn’t have been surprised. Hamilton is ideally fitted for the formidable job of trying to recapture the vanishing western farm vote for the Tories.

He’s a good-natured, cigar-waving prairie politician with an unbridled enthusiasm that is frequently and understandably mistaken for naïveté. As official keeper of the Diefenbaker “Vision,” he did more than any Canadian politician before him to make Canadians conscious of their north. Hamilton has never owned a farm, but for ten years after he became an orphan at fifteen he worked his way through high school and university as a hired man on five sections near Rosetown, Sask. “1 worked hard to get off the farm, because I had no future there without a father to back me up. But I’m still emotionally involved in the farmers’ welfare,” he says.

One important political asset Hamilton took with him from northern affairs to agriculture is Roy Faibish, a young Queen’s graduate in history and philosophy who has become the best executive assistant in Ottawa. He also moved the Canadian Wheat Board from the jurisdiction of Trade and Commerce Minister George Hees (a Toronto Tory) to the department of agriculture, and pleased prairie farmers who consider the Wheat Board the most important federal agency. The move also brings the supervision of grain production and marketing under one minister for the first time.

Hamilton is now engrossed in a basic re-examination of wheat marketing and production in light of the prairies’ chronic surpluses and the precariously maintained world price. This year’s wheat crop of about 490 million bushels could add as much as 50 million bushels to the existing half-billion-bushel surplus. Stiffening competition for Canada’s grain markets and the increasing yield of western acreage will raise this annual carryover significantly during the next decade, unless strong action is taken soon to reduce the prairies' 22 million wheatgrowing acres. Canadian taxpayers now shell out fifty million dollars a year just to store the unsold wheat.

Hamilton won’t admit it officially but his experts

are now working on a plan to take from two to four million marginal acres out of cereal production. Some of this land will be diverted to oil-bearing seed crops and it’s hoped that the government’s new rural development program will help provide alternative job prospects to slow down the farm exodus.

The new minister also has some startling agricultural “Visions.” He wants farmers in eastern Canada to switch from field crops to the cultivation of trees. It’s an idea that still requires much research, but Hamilton feels that it would give farmers a guaranteed cash income, at the same time as solving the shortage of accessible wood pulp, expected in Canada by 1975. With the eastern farmer busy watering his trees, the western farmer might then more easily be able to diversify his production. Hamilton also foresees great chunks of substandard land being taken out of Canadian agriculture for recreational uses.

Hamilton is confident that he can initiate his revolutionary agricultural policies at the same time as returning the prairie vote to his party. “If Alvin succeeds,” says one highly placed Ottawa Conservative, “he’ll become one of the top figures in the cabinet. If he doesn’t, we could lose the next election.” it 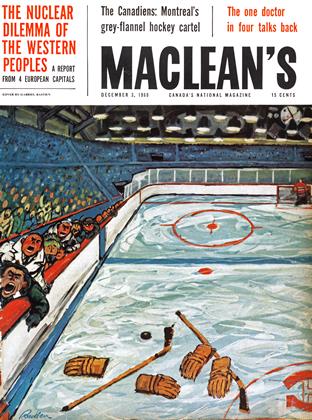