THE STORY ON PAGE ONE: A suspenseful courtroom drama starring Rita Hayworth as a woman on trial for the murder of her policeman husband. Sanford Meisner contributes an acid sketch of a nasty prosecutor. This tough and honest film was written and directed by Clifford Odets. Especially notable is its swift but unhurried cross-cutting from face to face during the climactic moments, unmarred by background music. The excellent cast includes Gig Young as Miss Hayworth's lover and co-defendant, Anthony Franciosa as a razor-witted young defense counsel, and Mildred Dunnock as Young’s mother, a pious and smiling dragon.

CARRY ON TEACHER: The British farceurs who lampooned the army in Carry On Sergeant and the hospitals in Carry On Nurse are at it again in their latest gagfest, with an English school as the locale. Among the participants arc a benign headmaster (Ted Ray), several incredibly inept instructors, and a gang of diabolical little angels in the classrooms. Rating: fair.

1001 ARABIAN NIGHTS: The nearsighted Mr. Magoo’s first feature-length cartoon. It is shrewdly tailored for the kiddies and probably tolerable to many grownups as weil, although years of repetition have staled the great man’s comic repertoire. This time he appears as Aladdin’s boss. Uncle Abdul Azziz Magoo, a Baghdad lamp-shop proprietor.

SHE DIDN’T SAY NO! Persistent coyness and an overstressed “charm” arc the hallmarks of this disappointing British comedy. It stars the attractive Eileen Herlie as a much-sinned-against Irish spinster whose family consists of six children sired by five different fathers.

SOLOMON AND SHEBA: This multi-million-dollar semi-biblical extravaganza is one hour shorter than Ben-Hnr, but it seems to take at least twice as long to sit through. Yu! Brynner as Solomon is a gloomy monarch; Gina Lollobrigida. looking like a rather bored strip-teaser, is the royal temptress who seduces him for political reasons. The battle scenes are suitably imposing. With George Sanders, Marisa Pavan, Finlay Currie.

TARZAN THE APE MAN: A routine but acceptable addition to the neverending African adventure scries, with a new Tarzan (Denny Miller) as the treedwelling jungle lord. Joanna Barnes is Jane, and Cesare Danova is a teethgnashing villain.

The Best of Everything: Drama. Fair.

Odds Against Tomorrow: Drama, (jood. On the Beach: Atom-survival drama. 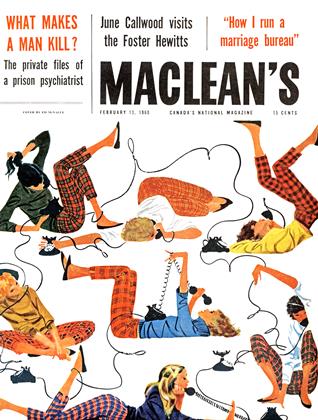