We're wrecking our children with too much love STUART K. ROSENBERG February 27 1960

So says this outspoken Toronto rabbi, who believes that sparing the rod can spoil the child and spoil the parent too

For years now some of the most widely publicized psychiatrists and psychologists have insisted that we offer our children love in heaping, telling, profuse amounts – and heaven help us if we temper love with forthright discipline. They have interminably reiterated the idea that love automatically makes a child good and lack of love makes a child bad. Simultaneously, they have preached that what happens to human beings after the weaning stage can do little ex cept bring out personality traits already shaped by their parents. . - -

Modern parents have been so brainwashed by these theories that they stand in awe, trepidation, fear and trembling before their tiny offspring. and far too many of them are walking around with feelings of guilt and inadequacy.

In my view, it’s time experts told parents the truths that are constantly being rediscovered — that children need a firm hand over them and that character structure does change after early childhood. If parents realized this they wouldn’t tend to distort out of all proportion incidents that are normal in most homes. Nor would they be afraid that every cross word they uttered or every restraint they imposed might turn their children into neurotics or criminals or both.

Unnecessary parental tension has, I am sure, injured rather than helped our youngsters, and the responsibility for at least part of the tension lies at the door of the school of psychiatric thought that trumpets that all one has to do is to name his problem, sit back, and love will magically solve it.

The love cult, when it suggests that love is all, leads us astray by turning our attention from other equally impressive needs of man — the laws of ethical behavior, the inexorable moral obligations we have to society, the necessity for personal compromise. And no domain has been so thoroughly invaded by it as the home. Parents are caught in a dilemma. Many chafe under the tyranny of love but dare not admit it, for to “be modern” they must piously repeat the litanies of the New Psychology.

Others, love-starved themselves, crave adoration from their children. With what result? A whole generation of family heads has lost touch with some vital facts of life. The worship of love has blinded them to their true role as teachers, weighed them down with unearned guilt feelings, prevented them from being effective guides. Mothers are preached at, told to “relax and enjoy their children,” yet are simultaneously scolded, by the same mentors, if they deny their children what they want.

Dr. Benjamin Spock, one of the most widely followed advisers of parents, admits: “One of the reasons why being a parent has been hard in twentieth-century America is that so much psychological data has been accumulated by professional people. It has intimidated many parents, particularly the educated ones with a respect for book knowledge — made them lose confidence in their own intuition and authority.”

It’s high time for an Emancipation Proclamation for Parents that would free them from the neurotic fear of not loving their children enough when, indeed, they may be loving them too much! As a step in this direction, 1 suggest that we politely but firmly explode the myth that parents must make life pleasant for children.

Children today are thought of as beneficiaries, hardly ever as benefactors. They have few duties to the home, optional rather than mandatory responsibilities to the group, and arc under no obligation to earn,

their rewards. We seem to be convinced that all obstacles to pleasure and contentment must be removed or our offspring will grow up with scars of resentment against parents who did not protect and secure them.

The facts of life often run in the opposite direction: as they grow into the age of discernment, many youngsters begin to recognize that their parents' over-concern has made them too dependent, and they blame over-indulgent parents if they lack self-confidence. When parents give too much, too soon, they unwittingly dull the child's senses by making life so easy that pain, trial and normal deprivation can never be faced realistically. The child who has been given little opportunity to build up his own inner defenses has a hard time drawing on spiritual deposits he never made.

No one is suggesting that parents should inflict unbearable discipline on their children — but neither ought they feel guilty for not straining every muscle to give them only pleasure.

A young delinquent I know — I’ll call him Tom—put his finger on a long overlooked problem when he explained his difficulty to a social worker: “My folks were always afraid to hurt my feelings. Everything I wanted, they said l could have — if not right away, then maybe some day. 1 grew up feeling that I was entitled to happiness and if things didn't go my way, someone else was to blame."

Tom’s situation points up the psychic hurt and the moral confusion we can cause our children by seeking to make their lives too easy all the time. Life is no bed of roses, and as parents we have an obligation to prepare our children to absorb the shocks and stresses of living. The parent who teaches his children how to handle disappointment and pain need not apologize. He is doing a better job than the one who thinks he’s giving them love by not denying them ease.

In the name of love, we commit another error. We avoid disciplining our children. If we assert ourselves too much, we fear that our youngsters will feel unloved and, therefore, unwanted. But the shoe is probably on the other foot: such parents are themselves too love-conscious and are afraid to lose their child's affections by showing too much control.

John — a good-looking, bright and perceptive seventeen-year-old — told a social worker a tale that more parents need to hear — particularly those who resemble his own. His clergyman had called him in to discuss anti-social patterns in his behavior. In self-defense John explained: “I've been getting away with murder at home. Dad's been so busy succeeding at

his work that I’ve been exposed only to mother.”

Increasingly our children arc being raised by their mothers alone. Fathers, busy competing and producing, have subcontracted the child-rearing functions to their wives. But, often, mother-love alone is biologically incapable of the physical fortitude required to hold the parental line against the strenuous desires of children.

Even if mothers earnestly try to become fathers, inevitably their womanly slips show'. Frequently they are not getting enough love and attention themselves. They feed on the affection their children give them. “Why,” some women ask, "should I deny myself love by whipping my youngsters into line?”

Unfortunately, love without thoughtful, character-molding discipline — like love without shared sacrifice — does not insure good children. Children must be exposed to reasonable and consistent doses of parental control, or else they will find growing up difficult. As we grow older

“Oh my, isn't he cute!” may be a diplomatic way of describing the nasty little boy who runs roughshod over his friends. But it is not difficult to pick out the products of spineless parents in later life. They still think that they're “cute kids.’ They have been fashioned into self-centred, self-satisfied monsters by doting parents who were afraid to lose their affection. They needed to be spanked, lovingly; instead they were spoiled, dreadfully. Sparing the rod does spoil the child; it also spoils the parent.

The parent who does not require his child to toe the mark is living in a nevernever world of unreality. By their nature, growing children are seeking to enlarge the limits of their freedom. But there is abundant clinical evidence to indicate that

many teenagers who demand more liberties are, in fact, frightened by the prospects of complete freedom. They are not quite sure how to handle it; they not only need but want limitations which serve as directions for the proper use of liberty.

Parents should also realize that there is a tendency to avoid applying proper discipline — even reasonable punishment — for a purely selfish reason: we don’t really care what happens t-o the child so long as he loves us! Of course, our children deserve our love; but they also need, deserve and must expect punishment when they misbehave.

I heard of one fifteen-year-old girl who could come home at any hour she pleased. Her girl friends envied her; they had to be in by midnight. But she was unhappy.

“My folks,” she admitted to a school counselor, “seem to think that I will admire them more if they tell me: ‘You're old enough to know. You can do as you please!’ Actually, I feel as if they don't really care. All my girl friends tell me that their mothers stay up waiting for them if they’re late — because they are worried about them. I'd like the idea of my folks worrying about me.”

Just as it is needed in the home, firm discipline is needed in the school, and wanted by the children themselves. Ask any mature adult which of his school teachers he best loves and remembers. Invariably those teachers who avoided discipline because they wanted to be loved were soon forgotten. The teachers who were not afraid of being taskmasters wielded a lasting influence on us: often they are unforgettable because they unflinchingly stood for a specific code of conduct, and pointed us toward difficult goals.

On balance, our worship of the love cult can cause us more difficulties than it claims to overcome. We must stop worrying about giving our children all the things we did not have. Instead we should recheck our own childhood to recapture from an older generation some of the things we did have. Then, we may transmit a more realistic, more integrated way of life to children who will know where they are going, because they will have a clear idea of where they came from. We need to stick to our guns, when we believe that we are right, and not fear that people will call us loveless parents. If we fritter away our moral authority as the price we pay for love, we will soon discover how superfluous we really are.

The tragedy, of course, is that our children really need us desperately and want us to be more than their pals. They need and want parents, if 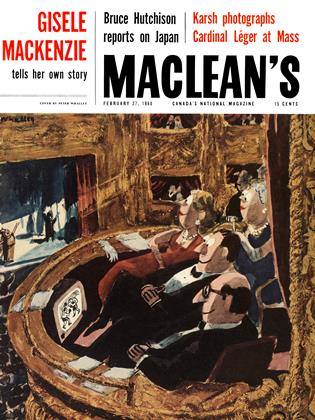