The tabloid Daily Mirror is unquestionably the liveliest publication in Britain. We were, therefore, not particularly alarmed recently when it published on its front page the drawing of a skeleton at the wheel of a motorcar. Nor did our flesh creep when we read the main headline: “A Mirror shock issue.” Looking inside, we found a double-page spread of eighty small photographs of people — fifty-one men. eighteen women and eleven children. What was the unifying factor of this strange assembly of human beings? The answer is as simple as it is horrifying. All eighty of them had been killed on the roads in one day and night during the month of December.

The Daily Mirror pointed out to Ernest Marples, the lively Minister of Transport, that in the fifty-two years he had been on this earth a quarter of a million people have been killed on Britain's roads and more than eight million injured and mutilated.

Two or three days later it was stated in the press that of the 145 fatal accidents which occurred in the four festive days from December 24 to 27 inclusive, seventy-five percent occurred during the hours

of darkness. It is impossible not to draw the inference that motorists who had been celebrating the season in the early hours of the morning were likely to be more “lit up in spirits” than those who had gone to bed at a normal hour. The British police are reluctant to attribute an accident to liquor unless they are prepared to make that charge in court. And, after the sobering-up process of sleep, the motorist under charge is usually quite normal in manner and speech.

Because of these difficulties in prosecuting a driver for drunkenness, a Tory MP is about to introduce a bill which calls, in cases of dangerous driving while under the influence of liquor, for the accused to undergo a chemical test. The Minister of Transport has already tested a device called the "breathalizer” which measures the degree of alcohol in the blood.

Inevitably, the temperance societies and the abolitionists in general are whooping up a great cry against alcoholic refreshment for motorists. They base their case on the fact that in the twenty - four hours from 6 a.m. on Christmas Eve to 6 a.m. on Christmas Day nearly half

The whole problem is so complex that I decided to drop in on Ernest Marples, the remarkably capable and unorthodox Minister of Transport. I found him in his office in a shining new building in Berkeley Square. Marples is one of the most remarkable personalities in British public life. Dickens might have invented him. Thackeray would have deplored him. Dumas would have loved him. Today he is rich, still somewhat brash, but immensely competent.

When Harold Macmillan was appointed Minister of Housing by Winston Churchill in 1951, Ernest Marples was appointed his junior minister. Disappointed though he was with his lowly post, Macmillan went into a huddle with Marples.

-I am informed,” said Macmillan, “that OUT target is to build three hundred thousand houses in a year.”

"Well.” drawled Macmillan, “what do you say if we build three hundred thousand houses?”

It would have been hard to imagine two men of such assorted personalities, background and appearance. Yet both were supremely capable. Macmillan was a world figure and would have made an admirable ambassador, but Marples had built factories and created new industries

tradesman not long out of school.

So there came the day when, sharp on schedule, Macmillan announced to the House of Commons that he had completed his 300.000 houses within the year’s limit. When the prolonged cheering of the Tories finally came to an end, Aneurin Bevan rose and led with all the chin he had. “Any fool could build three hundred thousand houses,” he shouted. (As Labor’s minister of housing, Bevan had set the same target.)

Macmillan rose to his feet languidly, deceptively bored. “I know one fool who didn’t,” he drawled.

Marples’ part in the housing triumph wasn’t surprising. In the easy years when the socialists were in power, he had built up a successful construction company. Just to keep fit he ran in Hyde Park early every morning. With his relentless purpose and swift mind he saw how he could offer tenders lower than his rivals through the ever-increasing skill of his staff — always led by him. He had competent partners, he kept an eye on them and never left doubt about who was the boss.

When Macmillan led the Tories to the great victory of the 1959 general election, he had the chance to nominate his protégé for a ministry which would not only give him high standing but would test him to the utmost. He named Marples to the Ministry of Transport which is responsible for trains, roads, road traffic —indeed for everything that travels on wheels, including bicycles.

London’s traffic had almost come to a standstill in rush hours. In fact there were many periods in the day when it was quicker to walk than take a bus or a taxi. Obviously Marples was the man for the job. But having risen in the ministerial ranks he had to devoid himself of any direct authority in his successful construction companies.

“This is a job and a half,” said Marples when we w-ere talking in his office. "My own company has contracts for building a big port, and two dry docks, but 1 must not have anything to do with it. Never mind. What do you think of the Pink

Zone? It’s a special London area where you can park cars only under special conditions at special times. I can tell you that London traffic is moving faster than it has done for a hell of a long time. I’ll drive you to the statue.”

Out we bounced and entered his car. Through surprisingly clear streets we reached the Wellington Arch at Hyde Park Corner. Out we got and, to my surprise. into the monument we went. A half dozen smartly uniformed policemen were

there, giving the same impression as a headquarters behind the line on the western front.

Telephone messages were coming from traffic policemen all over the crowded city. Street policemen were giving reports on this or that local situation. And back went the instructions where to slow down and where to push ahead.

"This is the real thing," said Marples. “In all the crowded areas, these chaps know exactly what is needed. They put on pace or they slow up according to our instructions based on the local situation."

Outside, by some miracle, the traffic around Hyde Park Corner, was moving as smoothly as if it were a Sunday after-

noon instead of the noon rush hour on a week day. The constables on duty looked at Marples with something of the same respect as Montgomery drew from his staff officers during the last war.

"It has cost me a fortune,” he said as we made our farewell, "but if we can keep the traffic moving and at the same time cut down the deaths on the road then it’s worth it.”

The police in the monument smiled good-bye. The traffic was moving at a remarkable pace, and Marples smiled benignly upon the historic scene. Perhaps the day will come when a statue of Marples will be erected in honor of the man who kept London traffic moving, if 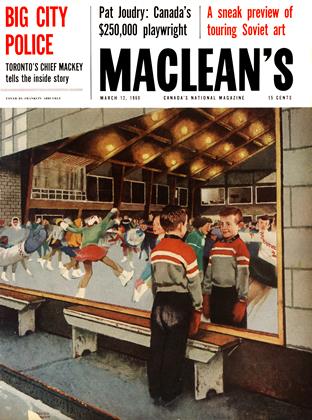