The crew of the Evergreen, an International Ice Patrol cutter, stood by all week, watching and waiting, as Iceberg No. 31 spluttered and sizzled into extinction in the warm Gulf Stream of the Grand Banks, off Newfoundland.

It seemed like one ot nature's deliberate little ironies that such an ancient piece of ice should now die so quickly. For, in a sense, it was ten thousand years since No. 31 was born. At that time, the Great Snows fell to form a vast bowl of compacted snow called the Greenland ice cap. During the hundred centuries since, the tremendous weight and pressure of the snows have sent glaciers sliding slowly across the three hundred miles to the west coast.

It was early in 1957 that this particular fragment splintered off one glacier and fell into the sea. The International Ice Patrol, a Newfoundlandbased group supported by eighteen nations, dubbed it No. 31 and began charting its course, which was to cover two thousand miles in its two-year life.

At I Vz million tons. No. 31 was a majestic structure, almost two hundred times the size of the liner Queen Mary. It was easily capable of sinking any ship that might collide with it. and nothing could be done to hold back its progress, divert its course or destroy it.

Since the ice patrol was organized nearly half a century ago it has searched in vain for a way to destroy icebergs. In 1922, two ice-patrol cutters spent four months firing at icebergs with five-inch guns. The shells merely punched small holes in the targets. Four years later a cutter crew tried exploding land mines in an iceberg's crevices. The resulting rain of ice shrapnel wounded some ot the sailors who w'ere standing several hundred yards away, and further land-mine experiments were called off.

In 1936, the ice patrol considered bombing icebergs but decided that too many bombs might be wasted in misses, and that hits and near misses might simply "calve" the targets into smaller but equally deadly icebergs.

Last year, the patrol renewed the attack with one-thousand-pound incendiary bombs designed to burn for twenty minutes each at 4.300 degrees F. — half as hot as the sun's surface. The patrol hoped the bombs would penetrate the icebergs and cause melting from within. But they merely made

surface holes barely larger than those caused by the five-inch guns thirty-seven years before. The patrol was planning to try again this spring, with bigger, longer-burning bombs; but nobody was counting on getting decisive results.

The patrol has one consolation: out of two thousand icebergs that reach the open Atlantic each year, only about forty get far enough south to menace ships plying established transAtlantic routes. Most are caught earlier by eddies and swept against the shores of Labrador or northern Newfoundland, where their lives end as violently as they began.

When a fragment from a Greenland glacier plunges heavily into the sea, almost submerging,

there is a mighty roar, a thunderous crash and a great splash. Then comes a moment of creamy turbulence as the newborn iceberg shakes oil the sea. regains equilibrium and settles comfortably in the water for a journey to eventual oblivion.

Most icebergs spend about five months drifting eight or ten miles out to sea. Then they are caught by the cool Arctic current and carried northward to Baffin Bay. where they are frozen into the Arcticice pack for the next winter. They are already a year old when spring returns, and the Labrador current overpowers the weak, expiring Arctic current and releases them to drift southward toward Davis Strait.

Their progress is slow ,

How we’ve mastered the iceberg menace

Drifting field ice impedes their movement, battering their sides and often locking them motionless for days. They take all summer to reach Davis Strait, and by that time the Arctic freeze-up is beginning to sap the strength of the Labrador Current. The icebergs spend their second winter beset by field ice and barely able to move.

By February, however, they reach the southern part of the strait, where the current picks up its pace and moves them out into the Atlantic at a speed of ten to fifteen miles a day.

It is here that most icebergs are captured by eddies and carried to destruction on the shores of Labrador or Newfoundland. The sturdy survivors — like Iceberg No. 31 —go farther south to a more exclusive burial ground in the southeast corner of the Grand Banks. In this period, from April 15 to May 15 — the peak of the iceberg season — the Labrador Current, now at its strongest, whirls the icebergs along at twenty-two miles a day. As it enters the Grand Banks, the colil Labrador Current encounters the warm Gulf Stream, creating a dense fog that multiplies the hazards for the ships passing through here on the busiest of the Atlantic’s seven major routes.

Icebergs alone would be hazard enough. When No. 31 was first sighted, it measured one thousand feet in length, with a breadth of five hundred feet at the waist and a height above water of 230 feet.

But this bulk was reduced with incredible speed when No. 31 passed into the Gulf Stream and began melting with the

weird sizzling noise characteristic of icebergs that are melting rapidly. Unlike ordinary ice. the compacted snow of an iceberg effervesces on contact with warm sea water, causing the water to bubble up into a hissing froth.

As No. 3 1 wasted further each day. the Patrol cutter Evergreen stood by at two hundred feet. On the seventh day. the cutter radioed word to its headquarters at Argentia. NlkL. that one more icy hazard had disappeared from the Grand Banks area.

Icebergs, have, ironically, been a serious menace to sailors only since the advent of steam. Most old transAtlantie sailing ships used the trade winds, far to the south of the iceberg zone, and those that iliil use the northern route found themselves carried on a course slightly divergent from the path of the icebergs. In a fog. there was little danger of ramming an iceberg, because a sailing vessel was usually becalmed at such times. The only risky weather in iceberg areas was a combination of high wind and low' visibility. Even then, a small buoyant wooden ship stood a better chance of surviving than a steel-hulled steamer does toilay.

The growth of the iceberg menace was neither speedy nor spectacular. But by the latter half of the nineteenth century, the Cunard line was suffering such expensive (though seldom disastrous) iceberg damage that it laid out a system of routes mostly south of the ice limits. In 1898. other companies adopted the same routes, now enforced under the North Atlantic Track Agreement.

But it wasn’t until 1912 that the world at large became conscious of the iceberg menace. On the night of April 14 that year, the ’'unsinkable" Titanic collided with an iceberg and went down, with a loss of fifteen hundred lives.

This disaster impressed the major maritime nations with the need for more positive protection against icebergs, and in 1914 they set up the International Ice Observation and Ice Patrol Service — now commonly known as the International Ice Patrol — chiefly to stand watch during the iceberg season. The United States agreed to provide all patrol services and each member nation later agreed to bear a share of the cost in proportion to the amount of tonnage sailing the Atlantic under its national flag.

This system of assessment is still used today. Although Canadian-owned ships are quite numerous on the Atlantic, most of them are registered in other countries, and Canada’s contribution to the ice patrol is therefore very small. (In the last year on record. Canada's share of the ice patrol’s $354,000 expenditure was only $289.)

In protecting Atlantic shipping from icebergs, the ice patrol has a perfect record — at least within the terms of its job. The last ship sunk by an iceberg since the patrol was formed was the Danish freighter Hans Hedtoft. which sank in 1959. But it went down in January, not in the iceberg season, off the coast of Greenland, outside the patrol’s normal operating area. The Hans Hedtoft radioed an SOS. but was never found. Similarly, a Danish trawler and a Portuguese schooner were

sunk by icebergs during the 1940s — outside the patrol area.

The ice patrol’s watch begins each February, when personnel at Argentia use information from the Royal Canadian Navy and the federal Department of Transport to begin plotting the location of icebergs in the Baffin Bay, Melville Bay and Davis Strait regions.

During March, two DOT weather observation teams on Ellesmere Island begin sending out information on ice conditions in their region, and these surveys are radioed to ships and fishing fleets by the RCN. Meanwhile, ice-patrol planes also keep watch and report any icebergs likely to reach the Grand Banks.

By April 1. when the cutter Evergreen sails from Argentia. the progress of all icebergs south of Davis Strait is known. The oceanographer aboard the Evergreen collates the radio reports from all sources and adds data gathered by the Evergreen, such as water temperature and speed of currents. When this data has been checked against radar and long-range sonarecho findings, the patrol has accurate information on the w'hole region from the Grand Banks to Davis Strait.

The oceanographer also locates and watches the "cold wall” — the line where the Labrador Current meets the Gulf Stream. North of this line is the danger zone. South of it. there is little danger, for any iceberg that sails this far is sure to fizzle out, as No. 31 did.

Nevertheless, as it did with No. 31, the Evergreen keeps careful watch from April I to July 31. to make sure the warm current dispatches the most dangerous intruders. By August, the last of them are gone, and the Evergreen returns to port, confident that, for the rest of the year, nature-—-which created the iceberg menace —has once again removed it. 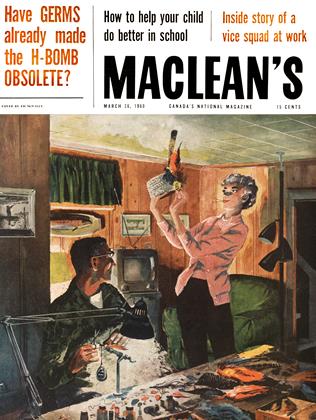