More than once, I have contended that London is an overgrown village, whereas Montreal and Toronto can claim the status of metropolises. When it was announced that Princess Margaret had become engaged to Mr. Armstrong - Jones we felt in London as if she was one of the family and that somehow the event was personal to all of us.

In fact it was a climax to a series of events which had embroiled royalty and semiroyalty in the fierce heat of controversy. First there was the surprise thrust of Lord Mountbatten, who wanted to ensure that within a stated period of time — albeit a long period — a section of the royal family should be named Mountbatten-Windsor.

Then there was the joyous anticipation of the Queen’s third child. The patient subjects of Her Majesty waited at the gates of Bucking-

ham Palace and then there came the shout: “It’s a boy!” The happy crowds were delighted, just as they would have been if the baby had been a girl.

A few days later came the sudden death of the lively and vivid Countess Mountbatten and, according to her own decree, she was buried in the sea that she and her husband loved so dearly. The countess had many critics but also many champions and London will not forget her. No one could deny her vitality, her audacity and her relentlessness.

At the very climax of it all there came the sudden news that seventyfour - year - old Alexander Albert Mountbatten, Marquis of Carisbrooke, had died. It was he who did so much to guide the glittering fortunes of Louis Mountbatten in the early CONTINUED ON PAGE 66

years, but suddenly the Mountbatten saga had become like a Greek tragedy of Euripides.

Well, that was that. According to the pattern of human existence, tragedy and joy had joined in a macabre dance of the fates, and just then came the completely unexpected announcement that Princess Margaret had become engaged to the clever young photographer Mr. Armstrong-Jones. It caught the gossip writers of the London press completely asleep. Here was news that excited everyone, but the press knew nothing about it in advance.

The first reaction was one of genuine pleasure and even relief as we recalled the unhappy romance of Margaret with Captain Townsend. After that, she had become a sad woman for whom permanent spinsterhood seemed certain. True to the technique of royalty, she smiled in public and attended the functions which are inescapable from high place, but her smile on official occasions was forced and wistful.

My memory goes back to the day when little Margaret Rose and her sister sat in the abbey, watching their father’s coronation. Margaret was so tiny that her feet could not reach the floor, so instead she swung her legs in childish enthusiasm. But Elizabeth put a warning hand on Margaret’s knee. One felt even then that the older sister, as heir to the throne, would willingly bear the burden of sovereignty when it came to her and would accept the dedicated life that fate imposed upon her. The problem of Margaret had still to wait the whims of fate.

Princess Margaret was twenty-nine at the time Queen Elizabeth withdrew from her normal activities because she was expecting her third child.

Barely had the cheers subsided after the boy was born than the newspapers exploded the news that Margaret had become engaged. Armstrong-Jones was not only an excellent photographer but also very much a young man about town—a member of the smart younger set who are more given to dances and parties than to affairs of state. At once there emerged the problem of the social status of the young man. When he married his princess, how would they be announced on state occasions? Would a master of ceremonies at a public function announce: “Her Royal Highness Princess Margaret and Mr. Jones”?

One might argue that a difficult problem confronted the royal family with the accession of Elizabeth II to the throne. There we had a queen and prince consort, but for some reason the prince was made the Duke of Edinburgh although needless to say it did not reduce his royal wife’s title to that of the Duchess of Edinburgh. Therefore his official status today is: “His Royal Highness the Prince Philip, Duke of Edinburgh.”

At any rate you will agree that aí-

though the role of consort was by no means unknown to British royal circles, it was something new to have Her Majesty’s sister married to a Mr. Jones even though it be a Mr. Armstrong-Jones. The ghosts of Gilbert and Sullivan must have walked that night.

There was a great divergence in the reactions on Fleet Street. The left wing weekly New Statesman was not only ungracious but boorish. Its editor commented: “One more article on ‘My friend Tony’ and I personally feel I shall give up the unequal struggle. But a royal engagement, slap on top of a royal birth, takes its toll of the strongest.”

By contrast the Guardian went all goo-goo with its pronouncement that the whole thing was a fairy-story romance of the young man (working for his living like countless other young men) who has won the hand of a princess. Even the lordly Times was quick to point out the great advantage that one very popular virtue of Mr. Armstrong-Jones is that with him the princess will have no temptation to belong to other nations but will remain an English Lady.

The dignified Daily Telegraph urged our natural interest in the romance to be tempered by a decent respect for the privacy to which any engaged couple is entitled. To which one can only comment: “Laugh that one off!”

What then is the future of these two young people who have somewhat belatedly reached the romance and agreement of marriage? Armstrong-Jones will no doubt be created a Marquis although his wife will remain a princess.

Everyone of decent feeling hopes that gradually Armstrong-Jones will bridge the gap between his artistic and his official duties. To achieve that he will need the co-operation of the newspapers and of television. When a sufficient time has elapsed for him to exchange high spirits for the burden of high degree, he will have learned the technique of royalty and may well prove a source of strength to the true preservation of the Palace.

Since the Queen now has three children, it is unlikely that Princess Margaret will ever be called to the throne. But no one doubts that when it comes for Armstrong-Jones to accept a high title he will have acquired experience, knowledge and a sense of dedication. For a time the satirists will have their way but their wit will grow thin.

Perhaps some day Princess Margaret will be governor-general of Canada, and her husband will be able to take photographs of Rideau Hall and its lovely parks.

But all that is in the distant future. Soon the prophets, the priests and politicians will gather in Westminster Abbey for the wedding of the Queen’s younger sister, while in Parliament Square the battery of photographers will take pictures of the aristocrat of the camera world and his royal bride.

From Land’s End to John 0’ Groats the toast will be to “The Princess and the Jones boy!” and we shall all feel younger for it. * 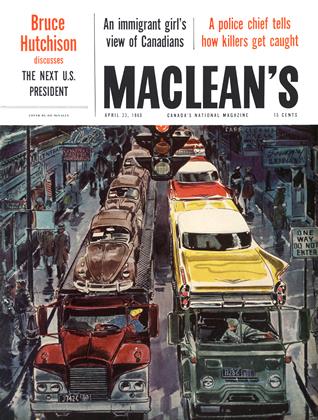