IN THE ARGUMENT about how to treat South Africa, all sides agree on two major points:

We want the world to know that Canada is against apartheid, the policy of color discrimination that reached such extremes of brutality in March. We know we’re not innocent of color prejudice ourselves, as our immigration practices prove, but that’s all the more reason for showing where we stand now. No sane man who knows the facts would compare Canada’s furtive, rather shamefaced restriction of colored immigrants to the disfranchisement, the near-slavery, and now the mass murders that have been the black man’s fate in South Africa.

We want to make the Commonwealth strong. Some Canadians think its true strength would be greater, not less, if we kick South Africa out. Others agree with Howard Green, the minister of external affairs, that if we start on that policy there would soon be no Commonwealth left. But this is a debate about means — the end is the same, a stronger Commonwealth.

To both sides of this argument, we have a modest proposal. If we really want to help the victims of apartheid, and if we really want to strengthen the Commonwealth, why stop at lip service? Let’s offer some real help. Let’s offer safe asylum to refugees from the brutality of the present government of South Africa — refugees of any color, white, black or brown.

When the defeated Hungarian rebels fled across the Austrian border three years ago, Canada didn’t merely call for the social ostracism of Red Hungary at United Nations. Instead we took the refugees in, thirty-seven thousand of them, and for many of those thousands we provided air transport free of charge.

No thousands have yet escaped from South Africa, but one reason may be that they have nowhere to go — nowhere except a couple of small, poor, primitive, half-free colonies that couldn’t possibly absorb a torrent or even a substantial trickle of refugees. Perhaps there wouldn’t be more than a few in any event. The important thing is to make the gesture and establish the principle: “We in Canada think you Africans are being treated outrageously, and we will help you. We will take you in.”

Such an offer would make two great gains at one stroke, for the Commonwealth. It would do far more than any paper resolution to convince the Asian and African members that Canadians mean what they say about human equality. And it would silence the one effective counterargument that South Africans can throw at us — the charge that we are mere hypocrites, throwing stones from the doorstep of a glass house.

The charge is true. We arc hypocrites, on this subject of racial equality. No matter what we may say, we do not in fact give all races equal treatment in this country. But in this case we can make use of one incidental advantage of hypocrisy — the fact that nowhere in our mealy-mouthed immigration laws does it actually say right out: “Colored people shall not be admitted.” We can let them in if we like, without any actual change in the law, and we can send planes to Bechuanaland or Basutoland to get them.

Prime Minister Diefenbaker could make this clear in one sentence. He could tell the Commonwealth prime ministers that Canada will open her doors to refugees, of whatever color, from inhuman treatment at whatever hands. 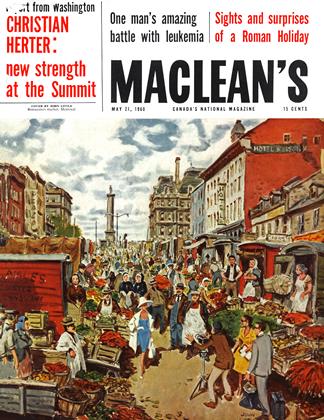