When Vancouver voters elected Douglas Jung, a thirty-three-year-old Conservative lawyer of Chinese extraction, to the House of Commons in 1957. they unwittingly made amends for an incident of seventy years before—a race riot that cost the city its independence for six weeks.

On February 24. 1887. when Vancouver was scarcely more than a frontier village of three or four thousand people, a man walked through its streets carrying a crude placard which read: THE CHÍNESE HAVE COME: MASS MEETING AT CITY HALE TONIGHT!

The invading Chinese were twenty - four laborers imported from Victoria to clear a tract of land in Vancouver's west end. Twice before, the Chinese had come, only to be met at the dock by crowds who passed the hat to pay their fares and shipped them back to Victoria. The third time, police escorted them ashore.

Three hundred men and boys gathered at city hall for the protest meeting and then, in response to cries of "Let's turn them out.” they marched to Coal Harbour where the Chinese were housed in shacks. The mob routed the Chinese out of bed. kicking and beating them. Two were tied together by the pigtails and thrown into a nearby creek. Their few belongings. mostly bedding and clothes, were burned. When police arrived, the vigilantes fled.

Next day, a logger, a milkman and a bookkeeper were arrested. After a week end in jail, they were acquitted by a sympathetic magistrate.

But the legislators of Victoria had had enough. In one day they railroaded through a bill suspending some of the powers in the city’s eleven-month-old charter and placing maintenance of law and order under government control.

Forty special constables landed in Vancouver and marched on city hall. The three previously acquitted vigilantes were re-arrested and retried. A hastily appointed stipendiary magistrate convicted two of them of disturbing the peace.

After that, the city simmered down and six weeks later the Victoria police were withdrawn, though the legislature did not repeal its punitive act for more than a year.

The old city hall where the vigilantes met, the bush through which they marched to Coal Harbour, and Coal Harbour itself—all lie within the boundaries of what is now the federal riding of Vancouver Centre, represented in parliament by Douglas Jung, son of a Cantonese merchant.

For little-known humorous or dramatic incidents out of Canada’s colorful past Maclean's will pay $50. Indicate source material and mail to Canadianecdotes. Maclean's. 4SI University Ave., Toronto. No contributions can be returned. 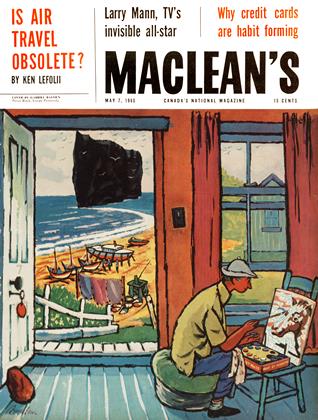