THE BELIEF that memory—and with it, intelligence —reaches its peak in early adulthood and begins to decline in middle age is so widespread now that most employers kick out even their top personnel at 65.

Not if they listen to some authoritative backtalk from D. C. Fraser, a 41-year-old British-born psychologist who’s been at Waterloo College in Ontario for three years (and who'll move to UBC this fall).

Fraser maintains, in effect, that some important elements of memory improve with age and the older you get the more use you can make of your mind.

What steers us wrong, says Fraser, is a mischievous factor called the “immediate memory.” Fraser tested a summer-school group of teachers at Queen's University. The youngest (18-29) fared best at repeating a series of eight-digit numbers. Again, when Fraser set forth a series of complicated instructions the younger group could follow them best, while older “students” needed certain steps repeated to them.

But then Fraser played a tape-recorded argument. Most of the youngsters could repeat sections of what was said—some almost verbatim. But the older group were better able to sum up the theme and present, on

the whole, a sharper recreation of what had been said. They understood it better.

What’s the difference? Physically, says Fraser, the brain and nervous system do become less efficient after 30. But if you work on improving your memory, your mental powers can conquer physical deterioration. “A man,” Fraser says, “can continue to raise his intelligence level through his fifties, sixties and even seventies.”

But if men shouldn’t retire at 65 or any arbitrary age, they should make some allowances for getting older. After fifty, most can't make decisions as quickly as they once did. They should be given jobs with more time to think.

Even given more time to learn them, can an old dog acquire new tricks? Fraser cites this example: “I know a 50-year-old who's never done any serious studying. He took up psychology. For four years, he was hopeless. Then in the fifth year he suddenly broke through. Now he does better work than the younger students.”

But, Fraser adds, “if he’d kept his brain active all along he could have picked up the same knowledge in six MONTHS.”-SHIRLEY MAIR 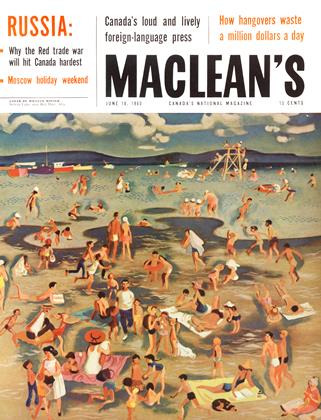