TWO-WAY STRETCH: Peter Sellers (left), who is said to admire Sir Alec Guinness above all other actors, is rapidly becoming his most formidable rival among Britain’s character comediHj ans. This time Sellers' role is that of the wiliest of three conniving convicts who ingeniously succeed in escaping from prison overnight and getting back into their cosy cell before morning. This gives them a marvelous alibi for a nocturnal felony. Bernard Cribbins and David Lodge arc Sellers' accomplices, with Wilfrid Hyde White as their outside contact, a bogus chaplain. The result is a hilarious crook farce, nicely free of strain and frenzy from start to finish.

CONSPIRACY OF HEARTS: A highly accomplished tearjerker from Britain, and worth seeing for its warmth of feeling — even though you are aware all along that you are being "worked on” by a team of professional sentimentalists. The locale is a convent in Italy in 1943. with Catholic nuns risking their lives to rescue the Jewish orphaned children from a nearby German concentra1 lion camp. With Lilli Palmer. Sylvia Syms. Yvonne Mitchell, Ronald Lewis.

THE 400 BLOWS: Few bookings outside the largest cities have been arranged for this French drama about a delinquent boy and the forces that shaped him. Film connoisseurs should try not to miss it. François Truffaut's first movie has instantly established him as one of the most gifted directors in the business.

THE FUGITIVE KIND: Tennessee Williams helped adapt his own play, Orpheus Descending, for the screen. Once again it's a sad, sick South he exposes to the horrified gaze; but there are redeeming flashes of pity and beauty among the cancerous hatreds. Joanne Woodward overplays as a Bad Little Rich Girl with a filthy sports car. but Marlon Brando as a poetic wanderer and Anna Magnani as a tragically repressed storekeeper perform superbly under Sidney Lumet’s direction. Rating; good.

WAKE ME WHEN ITS OVER: A good basic idea is overdeveloped and finally goes to waste in this Hollywood comedy. It tells of a group of peacetime GIs who build a fantastic hotel on a remote Pacific island, eventually launching a scandal that rocks the White House. With Ernie Kovacs, Dick Shawn.

Battle of the Sexes: Comedy. Fair. Because They’re Young; Drama. Good. Behind the Great Wall: Travelogue plus odors. Good.

A Dog of Flanders: Drama. Good.

Home From the Hill: Drama. Good.

Too Soon to Love: Drama. Poor.

When Comedy Was King: Medley of silent-screen farce. Good.

Who Was That Lady? Comedy. Fair. 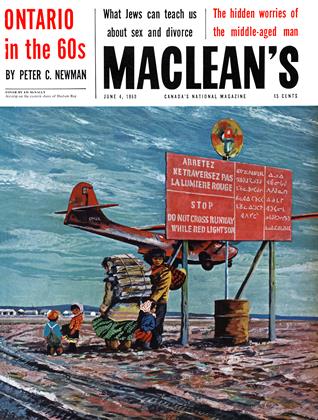