The British are a race of people who like to believe that they possess qualities of character and sportsmanship and that, above all. they are free of racial and religious bigotry, therefore they are shocked at the suggestion that Senator John Kennedy's chances of becoming president of the United States are reduced by his being a Roman Catholic.

"I low different it is in Britain!" they say. ‘Did we not pul Benjamin Disraeli on the political throne? Did we not appoint Sir Rufus Isaacs as lord chief justice, and did he not become the Marquess of Reading? Surely the Americans should try to emulate the tolerance that exists in the United Kingdom."

Let us admit that Disraeli and Isaacs are outstanding examples of how ability and personality can break through the barriers of racial or religious intolerance, but at the same time let us not allow our judgments to be misled by prejudice or sentimentality.

this question of racial intolerance was recently raised in the British press by the publication of the life and death of Leslie HoreBelisha. a Jewish lory member of Parliament and journalist who rose to be secretary of state for war and held that vital post when the Hitler war began.

One day, during the false calm of the phony war, Hore-Belisha called me on the telephone and

asked if I would come down at once to the War Office. At such a time this was in effect an order, and I told him I would be with him in fifteen minutes. By this time. Belisha and I were old acquaintances. Some years before, when he was a private MP. I had taken him on the staff of the Daily Lxprcss as an editorial writer. He was at once brilliant and lazy, with a deep-rooted dislike for rewriting or altering his first copy. On the other hand he was a most stimulating companion with an engaging wit and immense self-confideuce. So convinced was he of reaching the summit in political life that he regarded his journalism as a mere tinkering with destiny. His belief in his star was of Ñapóleonic proportions, and he put no limit to his future. Unfortunately his doting mother saw in him both a Disraeli and a Messiah. In the Commons he spoke with wit and even brilliance. As minister of transport he transformed London's street traffic by a system of warning lights which became known as Belisha Beacons. By now he was anything but lazy, and like most successful men he thought of nothing and talked of nothing but the task allotted him. Foreign affairs were far-off things. trade and finance were no more than words in the dictionary. What really mattered in the world was to speed CONTINUI:!) ON PAGE 55

up the traffic in the streets and to cut down the accident rate.

But even after this success, he must have been as astonished as the rest of us when in 1937. the period of the approaching Hitler war. he was appointed secretary of state for war. The generals accepted their new political master with courtesy but without enthusiasm.

With his quick, sensitive mind. Belisha saw that Britain was hopelessly unready for war. Why? That was the question, and he was determined to answer it. "I am going to make a personal enquiry into the men's quarters." he said. "What are they like?" To obtain the answers he talked not only to the generals and senior officers but to the men in the ranks.

A realist as well as a romantic, Belisha knew that he would find difficulties as a civilian minister set above the generals. Wisely he admitted to Sir Cyril Deverell, chief of the Imperial General Staff, and to each of the members of the army council, that he knew nothing of the conduct of war nor of preparation for it. The generals nodded their agreement, hut Belisha brought them up with a jerk when he said: "But 1 shall learn on my feet.

Why he was fired

Day by day he probed the recesses of army procedure and army requirements and realized that the immediate need was for more men. I lie regular army in 1937 was short by twenl\ thousand of its establishment, while the volunteer Territorials were forty thousand short. Belisha noted in his diary that looking five years ahead the prospect was that Britain would not be able to supply troops tor the overseas garrison.

And now comes the climax to the story. That morning when 1 sat down opposite Belisha at his desk it was obvious that some crisis was at hand. He was flushed and his lingers moved nervously as lie talked. Linally lie handed me a letter anil askeil me to read it. It was from the prime minister. Neville Chamberlain, and was marked "Strictly Private."

So there was conscription and, in addition. volunteers came forward in a growing stream.

The letter was as courteous as it was definite. It said that Belisha bail done splendid work at the War Oflice but the prime minister now felt that his gilts would be uscil to better ellect as president of the Board of I rade. He hoped that Belisha would agree and his new post would be crowned with success.

"Well?” said Belisha when l had finished reading the letter. "What do you make of it?"

I told him that there could not be the slightest hesitation — he must accept the Board of 'Trade post which, if not as spectacular as the War Office, was vitally important to the war cflort.

"I am much obliged for your advice,” he said, "but you must not be surprised if I do not accept it."

The years of adulation by his mother, the swift success in journalism and the strong impression he had made in parliament itself had blunted his mind to reality. Nothing could persuade him to

move from the War Office to the Board of Trade.

Later I learned the reason why he was being forced out. In dismissing a number of old-fashioned generals (and thereby clearing the way for men like Montgomery, Alexander and Alanbrooke). Belisha had aroused such resentment that Chamberlain decided, rightly or wrongly, that he must go. Perhaps he believed that Belisha’s arrogance would only lead to more serious trouble if he remained in the War Office.

There can be little doubt that the wor-

ship of bis mother and the flattery of his friends had produced the inevitable and irretrievable result. As we had warned him, his dismissal was a spectacular oneday sensation, a controversial second-day discussion, and a third-day retirement into the mists from which he was really never to emerge.

Deep in the land of shadows his marriage ended in separation. The man who might have been a second Disraeli, the man whose mentality was capable of almost any requirement, the man who could hold any audience enthralled, be-

came the Man Who Was — lonely, indulgent. out of keeping with the world he lived. His health declined and he died before his time.

Toward the end of his life, he had become a Roman Catholic, spending many of his weekends in monasteries where he sought the solace to his spirit which the life outside had denied him.

Here are the words Hore-Belisha wrote during one of his periods of retreat in a monastery :

"The world has gone wrong by losing contact with nature. The world does not

know where the food it eats comes from. Here they arc not afraid to soil their hands in helping to raise it. Here is the secret of a balanced life. If ever I were to become minister of education I would consider applying the rule of St. Benedict who so consummately proportions the labor of the body to the labor of the mind, both kinds of labor deriving grace because they are a devotion to God . . . It was in a dark period of history that

the need of monasteries was first felt."

What are the reasons why a man like Belisha should soar like a rocket and then fall meaninglessly to earth? First it is indisputably true that his mother's worship of him weakened the processes of his mind and his judgment. Secondly, he lacked a sense of proportion — a weakness which led him to his incredible refusal to accept the presidency of the Board of Trade.

Perhaps it is inevitable that nature, which abhors the unusual, is more kind to the ordinary man than to the genius. Yet Churchill was a genius who kept his feet firmly on the ground and never cheapened his standards of judgment.

When Neville Chamberlain was forced by events beyond his control to resign as a war-time prime minister, the younger MPs had no sympathy for him, but Churchill said to a few of us in the

Smoke Room: “Chamberlain is a finer man than I could ever be."

If Hore-Belisha had possessed Churchill's generosity of spirit, if he had understood the inarticulate idealism of the ordinary man. if he had been content now and then to walk across the Downs and commune with nature and the sea. his might be a name today that not only Jewry but the rest of mankind would acclaim. ★ 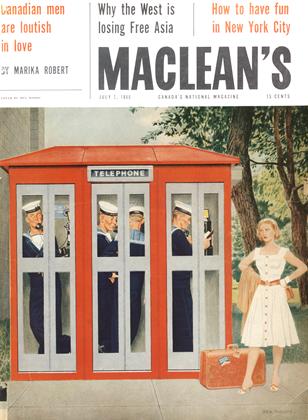