THE APARTMENT: Billy Wilder, one of the smartest allround moviemakers in Hollywood, has come up with another winner in this big-city comedy-drama. It somehow manages to be both sardonic and warmhearted while observantly focusing on the romance that slowly blooms between a bachelor bookkeeper (Jack Lemmon) and an elevator girl (Shirley MacLaine). Both are liny cogs in an immense businessoffice organization, and our hero's unorthodox way of getting ahead in the world is to let wolfish executives use his apartment for their illicit amours. Eventually, of course, he sees the error of his ways.

DONT PANIC, CHAPS: A few inept and forgotten British soldiers and a similar group of Germans unofficially establish a separate peace as castaways on a tiny island in the Adriatic. The ironies of their situation are only thinly developed in this skimpy British comedy. Thorley Walters and Dennis Price are the commanders.

HANNIBAL: This is yet another in the seemingly endless chain of Italianmade "historical" adventures with clumsily dubbed English dialogue. The results are mainly ludicrous, with Victor Mature in typical form as the Carthaginian military genius.

ICE PALACE: Time passes sluggishly during the two hours and twenty-three minutes of this sprawling Alaskan soap-opera, based on the Edna Ferber literary saga. A good man (Robert Ryan) and a bad one (Richard Burton) become lifelong foes after a youthful friendship, and in the process Alaska matures into statehood. Carolyn Jones and Martha Hyer are the principal ladies in their destinies. Rating: fair.

THE LEAGUE OF GENTLEMEN: A funny and suspenseful “perfect crime” thriller from Britain. With Jack Hawkins. Nigel Patrick.

LIGHT UP THE SKY: Unwisely, this banal British war comedy strives for pathos as well as laughter. It's about the dogged exploits and misadventures of an English air-searchlight unit during the Hitler blitz. Ian Carmichael, Tommy Steele and Benny Hill are among those involved.

The Day They Bobbed the Bank of Fnghiud: Crime drama. Fair. 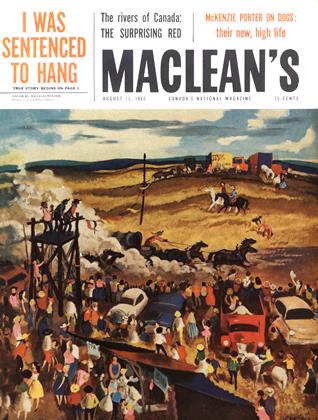