BEST BET ELMER GANTRY: A tabernacle in flames, with evangelist Jean Simmons clutching her burning Bible, provides an exciting climax for a strong anti graphic Hollywood comedy-drama about American rural revivalism in the 1920s. The title-role character, a come-toglory preacher with a weakness for wild women and whisky, is more believable in scriptwriter-director Richard Brooks' film than he was in the Sinclair Lewis novel; the part is played with skill and gusto by Burt Lancaster. In the solid cast arc Dean Jagger as a tent-show manager, Patti Page as a vulnerable psalmsinger, Arthur Kennedy as a sardonic but fair-minded newsman, and Shirley Jones as a temptress who was an amateur until she met Elmer Gantry.

AND QUIET FLOWS THE DON: Hot-blooded Cossacks in pre-revolutionary Russia are the principals in this impressive Soviet film, made in 1957 as the first part of a trilogy based on an immense 1928 novel by Mikhail Sholokhov. Some of the acting is almost operatic in its flamboyance but it suits the story.

FROM THE TERRACE: Another bulky novel, this one with a contemporary American locale, has been turned into a long, expensive movie — but the results are only occasionally absorbing. Author John O'Hara's unhappy characters include a ruthless young Wall Street career man (Paul Newman), his high-stepping wife (Joanne Woodward), and a simple but ardent small-town cutie (Ina Bahn) who loves him For Himself. Rating; fair.

SCHOOL FOR SCOUNDRELS: Despite a weak finish, this is an enjoyable British comedy starring the incomparable Alastair Sim as a lifemanship instructor who teaches a fumbling bumbler (lan Carmichael) how to he constantly one up on everybody and thus win life's daily battles "without actually cheating.”

THE SUBTERRANEANS: Evidently anxious not to bypass any possible market, M-G-M has finally paid homage to the beatniks of today's oddball humanity, in a maudlin melodrama that is almost continuously depressing. Leslie Caron appears as a French-born lost soul in San Francisco, and George Peppard as a confused novelist who becomes involved with her.

THF] TIME MACHINE: Producer-director George Pal earlier made such memorable science-fiction thrillers as War of the Worlds and Destination Moon. His new opus is a disappointment by comparison, with ingenious trick photography but an awfully silly story (adapted from a novel by H. G. Wells) and some of the most inept "acting” in the recent history of Hollywood.

The Day They Robbed the Bank of England: Crime drama. Fair.

The League of Gentlemen: Comedy-thriller about perfect crime. Good. 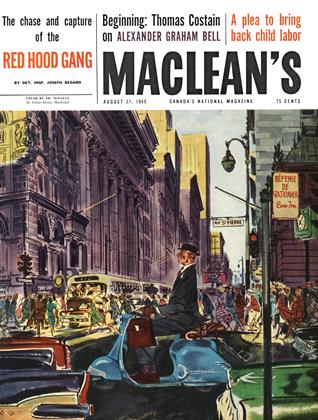