The day the Nazis took over Winnipeg

At 6:30 on February 18, 1942, early risers heard the ominous roar of diving aircraft and the crump of bombs. By 9:30, they heard their mayor surrender the city to a gauleiter. Here’s what it was all about

The day the Nazis took over Winnipeg

At 6:30 on February 18, 1942, early risers heard the ominous roar of diving aircraft and the crump of bombs. By 9:30, they heard their mayor surrender the city to a gauleiter. Here’s what it was all about

On the night of February 18, 1942, fresh snow was falling over Winnipeg. By midnight, it had stopped. The clouds had disappeared, and the clear moonlight was so bright that as late revelers plugged in their cars, slammed garage doors and raced for warm beds, they could easily read their thermometers: 14 below zero.

By two o’clock in the morning, most of the all-night restaurants were nearly deserted. Policemen huddled in their buffalo greatcoats at the corner of Portage and Main, or squeaked through the new snowfall as they tried doorways. Cruising taxis shared the empty streets with work crews salting streetcar switches or repairing trolley wires.

It was the kind of still, clear cold that happens on Christmas Eve. when children peer up at the stars hoping for a glimpse of Santa Claus — the kind of night that many an ex-Winnipegger, slogging through the chalk pits on the South Downs thirty-five hundred miles away, thought of with nostalgia.

At six o'clock on a cold winter's morning in Winnipeg, there isn't much more than a faint streak of light in the east to indicate the coming dawn. On the morning of Thursday, February 19, most Winnipeggers slept peacefully. At that moment. troops in Nazi uniforms were forming up quietly along suburban roads on the western outskirts of St. James, not more than six miles due west of Portage and Main.

Half an hour later, early risers who had switched on their radios heard the unbelievable news that the city was under attack. Then suburban areas heard shots, the ominous roar of diving aircraft, the crump of aerial bombs, the rattle of small-arms fire and the whine of mortar shells. Finally, the disturbances erupted into a blasting blitzkrieg that shook Manitoba and Canada out of their 1942 complacency.

The attack was planned and carried out with a daring typical of the Wehrmacht. Winnipeggers had watched the same thing with detachment in newsreels.

The first indication that anything was wrong had come at 5.30, when a taxi carrying a disc jockey on his way to work was halted by a platoon of Nazi stormtroopers who stepped into the road. Three stormtroopers got in and ordered the cabbie to drive to the radio station. They captured it in fifteen minutes. Studios and transmitters of all radio stations in the city were taken quickly and without opposition. At this same time, strong forces in light tanks occupied road and rail junctions.

Startled residents, turning on their radios, were greeted with the news that St. James, St. Boniface, Fort Garry, the Kildonans. St. Vital, and other outlying municipalities were under attack. Confirmation came quickly from their own front windows, as shots were heard in residential districts. Tanks and light carriers clanked through quiet streets.

One by one, key traffic points were taken and consolidated: the St. James Bridge at Tuxedo, the Provencher Bridge over the Red River to St. Boniface, the Redwood Bridge to Elmwood. The Pembina Highway was roadblocked at Fort Garry and the Selkirk Highway at Seven Oaks in West Kildonan. The city was methodically hemmed in. As the ring closed, street battles intensified — but surprise, speed, and superior firepower told the story, and the defending militia were driven back. By 9.30 a.m. — just three and a half hours after the first shots were fired, the dazed citizens heard their own mayor, over their own radio stations, surrender to Winnipeg’s new gauleiter — Erich von Neurenbeig — and Winnipeg was in the hands of the strutting, goosestepping Nazis.

As the day wore slowly on. Winnipeggers were given ample evidence of what the Nazi victory meant. R. F. McWilliams, Manitoba’s lieutenant-governor, and John Bracken, the premier, were the first to be arrested. John Queen, mayor of Winnipeg and a key figure in the city’s labor movement, was arrested in his office. The government leaders were locked up in jail at Lower Fort Garry, twenty miles north of Winnipeg.

After taking over the administration of civic and provincial government, Gauleiter von Neurenbeig turned his attention to Winnipeg’s newspapers and printing presses, radio stations, telephones, telegraph offices, and other means of communication. The presses were soon churning out instructions for citizens of Canada’s first Nazi-conquered city. By noon, the Swastika flew over Winnipeg and stormtroopers swarmed the streets.

By mid-afternoon, the take-over of the community's functions was almost complete. Churches were closed and placarded; ministers of all faiths were forbidden to hold services. Schoolchildren were told that instruction would be resumed when acceptable teachers were available. Libraries were closed and unacceptable books were being burned in the streets.

That evening, the Winnipeg Tribune, renamed Das Winnipeger Lügenblatt, appeared with its front page in German script. It contained a martial decree signed by Erich von Neurenberg over the Swastika, listing what citizens could do, could not do. and would do, with the penalties for disobedience spelled out in unmistakable language. No question marks remained: every Manitoban was given a clear picture of what defeat by Hitler's stormtroopers meant in terms of personal liberty.

The Nazi invasion of Winnipeg was a shocking lesson to the citizens of Manitoba on the consequences of defeat byHitler’s hordes. It drove home the fact that the community was at war.

The Nazis were members of the young men’s section of the Winnipeg Board of Trade, dressed in uniforms borrowed from Hollywood. Their realistic attack had been co-ordinated with a giant military manœuvre involving all of Winnipeg's militia units. The plan was given the name If Day, to illustrate as graphically as possible what would happen if Hitler won the war.

Because a surprise impact was important, no advance warning was given other than a proclamation by the mayor that If Day would be held to demonstrate the effect of a Nazi victory. Stunned citizens. overwhelmed by the realism of the invasion, wept on the streets at the sight of Nazis burning books and looting homes. But the planners of the operation, by anticipating possible causes of real panic, were able to avoid the hysterical reaction caused a few years earlier by Orson Welles’ radio broadcast of an invasion from Mars. By the next morning, all was over. The Nazi uniforms were returned to Hollywood—and Manitobans returned to their friendly and familiar world.

What did If Day accomplish? It was planned with one primary purpose — to put the people of Manitoba in the right frame of mind for buying Victory Bonds. If Day accomplished its purpose with honors — Manitobans were the first to pass their goal of $28,000.000, and they kept right on buying until $43.000,000 worth of bonds had been sold — 53.5 percent over their quota. The national quota of $600,000,000 was surpassed by 41 percent, and a great deal of the success of the national campaign was attributed to If Day, which was given continent-wide publicity.

But it served another purpose as well, for it showed the horroi of what Adolf Hitler was trying to accomplish, in terms that hit home quickly and hard. The message came through that the play-acting could easily become real.

Many of the young men who play-acted as Nazis that cold winter's day in 1942 fired real bullets and real shells at real Nazis before the war ended. Some of them, after helping to raise the funds that sent them to Europe, are still there — in war cemeteries. 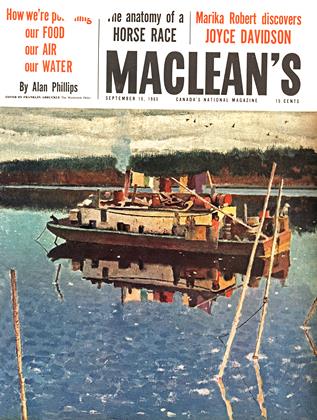