The rather shallow underground of the Welsh nationalists LESLIE F. HANNON September 24 1960

CARDIFF — It was raining and as dark as the pits of the Rhondda when we set out. With Huw at the wheel, we slipped along the slick streets out of Cardiff and, immediately, up onto the hairpin bends

of the mountain road. At a stone cottage on a hedged byroad we picked up Emlyn, and drove

farther into the head of the vale until a giant figure moved into the headlight beam, and waved us down. Huw parked in a gateway and we walked the rest of the way, up a winding steep lane. Past a

silent dog, we entered a typical

that is, except for a radio transmitter square in the middle of the || living room.

This was one of the twelve

secret transmitters of the illegal Radio Wales, through which the nationalists who hope to throw off the yoke of English rule get their propaganda and news to the two || and a half million people in the

Each transmitter is on the air at least once a week, and never from the same place twice. The sets are Ü all fixed to operate on the BBC’s Channel 5 TV frequency. When a Radio Wales broadcast is planned, the operators begin cutting into the BBC's sound during station breaks gi with a recorded three-note signal banged out on a saucepan—a steal from the theme of a well-known song. Television viewers within a 25-mile radius of the secret transmitter are thus informed that, when the BBC closes down at I 1 p.m., a Radio Wales program will follow.

I he scene in the cottage would have fitted perfectly into a resistance story from wartime Europe — indeed, one of the operators

served with Tito’s Partisans. But if ij the props were perfect, the atmosphere was not. The “conspirators” take pains to ensure secrecy, in their game of hare - and - hounds with the Post Office detection vans, but I'm sure they’d really love to be caught. A prosecution would give the nationalists a wonderful stage on which to air their grievances against London’s radio and TV policy in particular and against England in general. The unrepentgj

ant sinners would be strongly deif;

fended by the Plaid Cymru. This is the political party that, since jig

for Wales and, from a later date, gij

a Welsh seat at the United Nagj

tions. Its Welsh name means Party of Wales. I

wealth. Though it has slightly over 15,000 members, it has yet to elect jjjjjj a candidate to important office anygji where. It is devoted to the preservation of the ancient Welsh tongue, and its official notepaper lists the party headquarters as begij ing in Caerdydd (English: Cardiff). gj It appeals mostly to Welshmen g

who speak only a few phrases of g their Brythonic language.

At the last general election, the nationalists got 5.2 percent of the gj Welsh vote. Their next test will be gj

at the by-election later this fall at g

doesn't stand a chance of winning the seat, but would be cheered if its man got 5,000 votes — where gjj the great Nye, who couldn't speak gj Welsh, used to rack up majorities of 30.000. !

The Welsh nationalists’ leader is a shy, quiet-spoken farmer who raises tomatoes and children

scholarly 47-year-old market - gardener, who raises tomatoes and children — he has seven — on a farm with a spectacular view in Carmarthenshire. Evans is about as far from a rabblerouser as you can get. Quiet-spoken, almost shy. patently intellectual, he reflects the cultural origins of the party. Plaid Cymru claims about 130 supporters on Welsh local bodies — 250 if all the smaller parish councils are counted. Next spring, the party will make a major effort in the local elections with a total slate of 500 candidates.

Sitting in his home office, overlooking the best dairying country in Britain. Evans writes a stream of pamphlets explaining his cause, and keeps in touch with Welsh societies everywhere. He says there are 25.000 Welshmen in Toronto. There's also a strong group in Vancouver. Many overseas Welsh join an organization called CADW — the Committee to Aid in the Defense of Wales. (CADW also means "to maintain" or "to keep" in Welsh.) Evans recently toured the United States and Canada, and saw such well-known Canadian Welshmen as Leonard Brockington. the Rev. Emlyn Davies and McGill professor John Hughes. He describes his trip as a "contact tour" and not an attempt at international fundraising.

As Evans puts it. the Plaid Cymru cause is simple indeed: Wales is a nation, therefore it has full right to the same kind of self-government within the Commonwealth as Canada and New Zealand. It proposes a customs union between the various segments of the United Kingdom anti Ireland, its self-governing Celtic cousin. Passports would not be required within this area, and harmonious relations would presumably exist all round.

if all this is right and just (and that's a big if), why doesn't Westminster see the light? Plaid Cymru has a simple answer: England prefers to keep Wales for selfish exploitation, while offering surface acknowledgement of the right of the Welsh to have some say in their affairs. Profits from Welsh coal, slate, tinplate, steel and milk, say the nationalists. swell the English capitalists' coffers, and the lack of development of second-

ary industries has caused an even greater compulsory export: Welshmen.

According to Plaid Cymru, half a million Welshmen had to leave the country between the wars. The population of Wales is roughly the same today as it

was in 1921. while England's population has increased by nearly thirty percent in the same period. The docks at Cardiff today handle less traffic than they did a hundred years ago. Checking Plaid Cymru's claims against official statistics

is impossible, because Whitehall doesn't issue separate figures for Wales. Independent research done at the University of Wales, based on the year 1956, set a gross national product for Wales of £785 million, of which the government

took 42220 million in taxes. Government expenditure in Wales that year totaled 42215 million. The nationalists argue that the English made a clear profit of 42 5,000,000 out of the Welsh that year.

Plaid Cymru has lost any hopes it may once have entertained that any of Britain's three traditional parties will sincerely support its home-rule crusade. Even Lloyd George, as prime minister, with his Liberal party inspired by Welsh radicalism, failed to nail the red dragon of Wales above the Union Jack at Cardiff Castle.

Plaid Cymru is scornful of the lot. All power remains in London, it explains. Gwynfor Evans says flatly that in not one single important instance has either a Labor or Conservative government followed the advice of the Welsh Advisory

Council, set up by the Attlee government in 1949. The chairman of the council for its first ten years. Huw T. Edwards, resigned last year and is now the star convert in Plaid Cymru ranks.

The nationalists regard the present government broadcasting policy in Wales as a direct and deliberate ban on Plaid Cymru, and the pirate Radio Wales is the unofficial answer to the ban. In 1950 the BBC decreed that only parties putting fifty candidates into the field in a general election could share in the allotment of free political broadcasting time.

Wales has only thirty-six parliamentary seats and therefore a party that contests only these seats is barred from stating its case on the air.

It may be sheer coincidence that, in the whole United Kingdom, the Welsh party is the only serious sufferer; on the other hand, it gives weight to Welsh accusations that the English are engaged in a dark plot to smother Welsh nationalist aspirations.

“The radio and television ban on Plaid Cymru is unique in the history of British broadcasting and is unparalleled in any democratic country,” says Gwynfor Evans. “We do not ask to speak to the people of England, but we do want to address our own people in Wales. We have the right to speak to them. They have the right to hear us.” This plea has been put directly to Prime Minister Macmillan by Evans.

One answer by the government was to name a parson's wife. Rachel Jones, as chairman of the Welsh Council of the BCC to replace Lord Macdonald of Gwaenysgor, a Welsh-speaking Welshman. Tory supporter Jones neither speaks nor understands Welsh, and her appointment, at a time when the provision of programs in Welsh is a burning issue, seemed a deliberate flout. Welsh societies and even churches protested. Two members of the council resigned and Lady Megan Lloyd George, Labor MP for Carmarthen, asked Macmillan to reconsider the appointment. The imperturbable Macmillan brushed the protests aside with a few airy words.

Facing blank walls in so many directions, how — and when — does Plaid Cymru hope to achieve its aims? In the Commonwealth armies, Welshmen had the reputation of loving a scrap. But the nationalist movement, with its curious blend of cultural idealism and yearning aspiration, seems to prefer a Gandhi-like course of action. The nationalists seek to win a war of words. 1 could find only one recourse to direct action in the modern history of the nationalist movement. In 1936 three Welsh leaders burned an RAF bombing school on the Lleyn Peninsula after mass meetings of protest had failed to stop the government from establishing it there. They gave themselves up to the police immediately.

A much more typical demonstration was the dignified refusal by thirty leading members of Plaid Cymru to attend a garden party for the Queen and the Duke of Edinburgh during the eisteddfod in Carditi last month. Neither the Queen nor Prince Philip speaks Welsh, and nationalist leaders are not mollified by reports that Prince Charles is being taught enough Welsh to be able to respond in that tongue when he is presented to the people at Caernarvon Castle as Prince of Wales, probably in his seventeenth year. (The Duke of Windsor was coached for that role by Lloyd George.) There’s no suggestion, though, that Plaid Cymru is against the monarchy; in the hoped-for dominion status, the nationalists would welcome Elizabeth as Queen of Wales.

In a stone-block pub as solid as the Norman castles that brood over the Welsh vales, I asked a group of nationalists — all of them under thirty-five — if they were convinced they'd see a selfgoverning Wales in their lifetime. They looked intently at one another over their pints of Hancock’s, and Owen finally answered: “If not in my lifetime, in my son’s.” Owen is twenty-eight, married, but childless as yet. In a nation that absorbed the Romans, defied the Normans, and is still sparring with the upstart English, that's really a very short time indeed. 4E 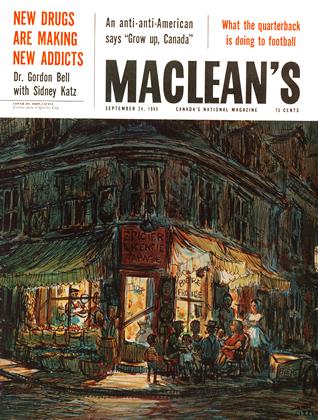