AMONG CANADIANS who don’t know much about art but do know what they like, there’s a suspicion that modern painting isn’t true to life because modern painters can’t draw. Alfred Pellan of Montreal is one answer to these doubts. Pellan painted the fireworks pinwheeling across the Canadian sky on the cover of this issue — the first of several cover paintings commissioned by Maclean’s from Canada’s outstanding painters. But Pellan also drew the classically precise portraits on this and the next page. Like the utility man on a baseball team, Pellan can do just about everything in his own game. He has painted patterns on Schiaparelli dresses, designed perfume bottles for Revillon, carved busts, illustrated books of Quebec poetry, drawn patterns for habitant hand-hooked rugs, designed sets and costumes for plays and even, once, painted the actors’ faces in vivid purples and yellows. His paintings, meanwhile, have been among the most honored Canadian canvases. In 1955 he became the first Canadian ever given a retrospective show by the Musée d’Art Moderne in Paris; in 1960 he became one of the few ever done the same service by the National Gallery of Canada. The same honored canvases have been at once the most influential and most controversial in FrenchCanadian art, largely because Pellan worked in Paris between 1926 and 1940 and then came back to jolt Canadien landscape painters with the troubling new ideas he had picked up in Europe. He has been called a surrealist and a cubist as well •as less flattering names, but in fact he is neither of these nor any other kind of “ist.” He is an inventive, interesting, and often amusing painter who has known many of the men who have set the fashions in modern painting. Pellan studied all of them, but followed none. Jacques de Tonnancour, a leading Quebec painter of the generation after Pellan’s, once said, “What French-Canadian art needed in order to be resurrected after three centuries of lethargic slumber was a vigorous blow from the outside. When Pellan came back from Paris he provided the blow.”

At 54 the man who knocked French-Canadian painting into the twentieth century is fair, squat, and strong, with the blunt hands of a workman, which his father was. Pellan goes at a painting like a craftsman dealing with a piece of work, not like an aesthete illustrating a theory. The flamboyantly colored, stylized but not abstract canvases he is now painting are often almost three-dimensional. He builds them up by laying stucco on his canvas, adding extra layers of cloth, even going to the kitchen for utensils to pile up paint with, in the way the whorls and rosettes of the fireworks in this issue’s cover painting are built up from the surface of the canvas. He is still looking for new ideas — he believes his most important paintings are ahead of him — and takes them wherever he finds them. Once, at lunch, he told me that he was experimenting with ways of getting a luminous look with ordinary oils; in the next sentence he said an American magazine cartoonist named Steinberg was an artist worth watching for the way he solved his problems. A day or two later I was talking to a young Montreal cartoonist and painter named Normand Hudon, and asked him where among the painters of Quebec Pellan fitted in. “Among them?” Hudon said. “He doesn’t fit among them. Pellan is the chef de file, the man the others follow.” 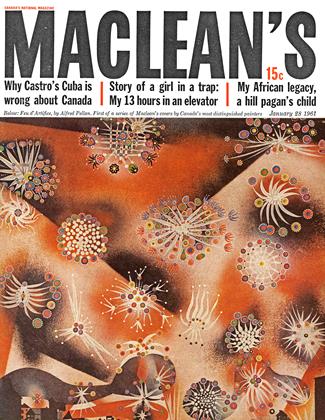