ONE OF CANADA'S greatest undeveloped natural resources is the ski terrain of the west — the Rockies, the Selkirks, the Cascades and the Coast range. Garibaldi Park, only 75 miles from Vancouver by rail (and about the same distance by a road that is not yet built), could offer the kind of skiing that hundreds of Canadians now fly all the way to Austria to get: 5,000 feet of vertical drop, more than double the biggest hill in eastern Canada, with potential runs down both sides of the mountain for every kind of skier from beginner to Olympic champion. There is an average depth of six to twelve feet of dry powder snow all winter, and skiing on the upper slopes can last as late as mid-J une.

Franz Wilhelmsen. a member of the 34-man committee that is trying to have this site developed as a candidate for the Winter Olympics of 1968. says: "I ve skied all over Europe — Austria. Switzerland. Norway — and I've never seen anything like it."

Garibaldi Park is one of four sites in British Columbia that, with Banff. Alberta, are being promoted as Canadian Olympic possibilities. The Garibaldi site is now empty wilderness. To develop it and to build an Olympic village would cost at least $13 million, not counting the highway the British Columbia government has promised to build if Garibaldi is chosen for the Winter Olympics.

Thereafter, of course, the Garibaldi Park development would be an important asset for recreation and the tourist trade, both summer and winter. The year-round attractions include a spectacular 360-degree view of some of the finest Alpine scenery in North America. including such striking peaks as the 7,598-foot Black Tusk (at left, with lone skier in foreground). 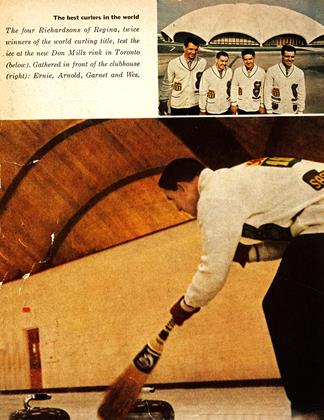