When the members of the Canadian Equestrian Team ride into the horse show ring at this month’s Royal Winter Fair in Toronto, completing an elite international jumping circuit that takes in shows at Harrisburg. Washington and New York, the odor of affluence will, as usual, be as pervasive as the tang of the tanbark. The front-row boxes will be filled with an expensive audience in white ties and mink stoles: the riders themselves will be costumed in red coats at $100 each. $75 breeches. $125 boots, and $25 velvet hats, while the horses wear $150 saddles and $40 bridles. Such panoply reinforces the popular notion that the horsy set is the moneyed set.

This is not necessarily so, says Tom Gayford. a member of the team and an Olympic and international rider for Canada since 1949. "If you’re a good rider and can develop a top horse, you can win enough prize money to just about pay your way.’ (An Olympic rider doesn’t sacrifice his amateur status by accepting cash prizes because in equestrian events the horse, not the man, is considered the prize winner.)

Some horses which may develop into good jumpers can be bought for $100; as soon as they prove their worth their value skyrockets. Blue Beau, which Gayford has ridden to the jumping championship in both Madison Square Garden and 1 oronto. was bought seven years ago by R. H. Rough of Toronto for $500. "1 got him as a hunter,” Rough recalls, "but he jumped so high I got airsick. I realized he was an open jumper so I sold him.' Now owned by E. H. C'oad of Aurora. Blue Beau could probably bring a hundred times the original investment if Coad wished to sell him—which he doesn't.

Tom Gayford’s father. Major Gordon Gayford, shares ownership with Sam Stanley of a thoroughbred. Mapleigh, which they raced in $2.500 claiming races on Ontario tracks before developing him into a successful jumper now worth at least $20,000.

Touring the horse shows is not all that expensive either, says Gayford. He knows a railway electrician who owns two horses, boards them at a public stable for $75 a month each, and takes them to shows in a trailer behind his car. "You can take a horse around for

There are about 20 shows at which a rider can jump below the international standard of New York and Toronto. Small shows at Woodbridge and Georgetown in Ontario, for example, give prizes of $25 for a first, $15 for

a second and $10 for a third. At Barrie and Sutton the returns are larger, ranging down from $50. At Toronto there are three cash awards in the international events, one a $450 team prize.

Major Gayford says any horse can be taught to jump—up to three-feet-sixinches. The good jumpers will take fivefeet-six or more. Once, at the Royal Winter Fair. Blue Beau cleared sevenfeet-two with Tom Gayford up.

Examples like Blue Beau notwithstanding, the chances are that high prices will buy the highest jumpers. A big gray called Ksar d’Esprit, which Canada’s Shirley Thomas rode in international competition (her father changed its name to Revlon’s White Sable) was sold to an American enthusiast. Miss E. Sears, for $35,000 and now, under its original name, haunts the Canadian team on the international circuit. TRENT FRAYNE 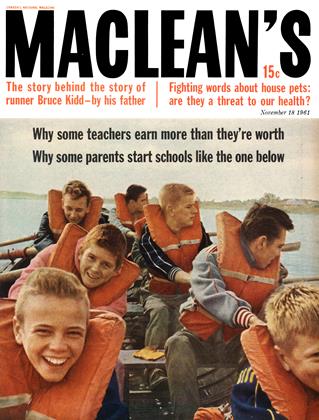