There’s little doubt that the prime example of John Diefenbaker's genius for practical politics was the use he made during the 1958 campaign of the mesmerizing concept of "The Vision."

The fact that the Vision is now blurred and has become in some quarters a faintly absurd cliché, doesn’t diminish the political talent that conceived it. For the prime minister knew that what Canadians then wanted was a visionary leader; now he and his strategists realize that what Canadians want above all else is full employment. So this remarkable politician is now altering his Vision, not sloughing it off as a failure, but modifying it to meet the mood of the times.

The second incarnation of the Diefenbaker Vision will probably be a plan for accelerated economic growth in southern Canada. This new version of the Vision—it’s officially referred to as the National Development Plan—is now being discussed by the prime minister’s senior advisers. Its detailed architecture remains secret, but the skeleton on which most of the adornments will be draped may become the establishment of a national power grid.

This scheme would be presented to the voters as a natural evolution from the Vision’s initial stimulus provided by Conservative government action during the past three years. Whereas the first phase of the Vision, presented in the 1958 campaign, was concerned with the location of the country’s outlying natural resources, this follow-up stage would be identified with the process of relating such discoveries to available power resources, through a national power policy. This next step, if it is implemented, may also include incentive proposals to encourage the domestic processing of raw materials.

While just about every economist who has studied the effects of a national power grid agrees that it would be a tremendous boost to the economy, the engineers warn that its construction is impossible with existing technology. The realization of the system depends on the ability to carry power over distances of a thousand miles or even more. At present, Canada’s longest power line is the 390-mile strand connecting Montreal with the generating plant at Bersimis. The Russians and Swedes have been experimenting with greater distances and the longest operating link is now a 600-mile line pushing 750,000 kilowatts from the Volga to the Urals. Ontario Hydro has done considerable research in long-distance transmission, but the problem is far from licked. One suggestion is that a Canada Electrical Transmission Act be passed establishing a federal transmission authority which would conduct the necessary research, construct the power lines and divide the benefits. A Power Development Bank would guarantee the provinces necessary construction funds.

The suggestion to build a national power grid, if it is used in the next election campaign, will be the largest single project yet proposed by the Diefenbaker government. No final cost estimates have been made but preliminary calculations show that expenditures of at least half a billion dollars would be involved.

The trans-Canada grid would allow the transfer of power surpluses to energy-poor provinces. It’s been estimated that Canadian power consumption, doubling every decade, will amount to about 76 million kilowatts by 1980. The hydro potential available to provincial power grids will by 1980 total only 49 million kilowatts. Much of the gap will of course be filled from other energy sources, but some experts are

convinced that the construction of a national power grid could provide the largest quantities of cheap power. With such a grid it would be possible, for instance, to capitalize on the fact that the time-zone differences mean it's dark in Ontario two hours before it’s dark on most of the prairies. By smoothing out peak demand periods across the country, it’s estimated that 1.5 million kilowatts might be saved. If a national power grid were in operation the five million horsepower that now roar to waste down Grand Falls, on the Hamilton River in Labrador, could produce six million kilowatts for Ontario industries. Right now, this power could barely be brought to Seven Islands, Quebec. Before a national grid can be built, serious federal-provincial jurisdictional disputes, as well as the technical problems of transmitting power over great distances, would have to be solved.

The few experts who have studied the idea of a national power grid insist that the scheme would greatly encourage the expansion of domestic manufacturing facilities, thus making it a major factor in helping to create more jobs in Canada. This will likely be the approach that the prime minister will use. if he decides to make the construction of a national power grid one of his planks in the next election campaign.

Of Diefenbaker’s original Vision, only one item has not yet been begun: work on a second Trans-Canada Highway. Of the 6,800 miles of new highway promised for the northern sections of the provinces, the Yukon, and the Northwest Territories, 4,900 miles either have been completed or are under construction. Probably the most impressive development in the north under the Conservative government has been to provide educational facilities for 56 percent of Eskimo children, compared with only 20 percent before the change in administration. This has cost $32 million.

Much has been accomplished in the Arctic during the past three years, but what has been done isn't up to the level of expectation prompted by the prime minister’s campaign oratory. His declarations (“I see a new Canada. A Canada of the north”) convinced some voters that our Arctic would suddenly sprout skyscraper cities, and that they’d hear weekly reports of rich mineral strikes.

Nothing of the kind has happened. The population of our North has increased at a rate of only five hundred new settlers a year since 1958 and the largest single investment in the Canadian Arctic remains the billion dollars spent by the U. S. defense department in building the DEW line. Frobisher Bay on Baffin Island recently acquired the world’s most northerly outpost, at an Eskimo recreation centre, of the Imperial Order Daughters of the Empire, but the original $75-miIlion scheme to expand it into a subarctic metropolis has been reduced to a $ 12-million growth plan, which may be further cut. Canada’s northern region remains economically inviolate; nearly half of last year’s income of the Northwest Territories Council was derived from the collection of liquor taxes.

The biggest news in the north is the planned start next spring of the 438-mile railroad to the Pine Point base metal deposits of the Consolidated Mining and Smelting Company. The only other mine now scheduled for early production is the tungsten strike at Flat River, just east of the Yukon-N.W.T. boundary. Because northern mineral production has been based almost entirely on the depressed gold and uranium markets, the value of mineral output actually dropped eight percent in 1960.

Although 115 million acres of northern land arc being held by petroleum companies under exploratory permits, only one well (Western Mineral’s Chance No. 1 ) has struck oil. The north’s entire oil production last year would supply far less than a day’s Canadian consumption. One well is now being drilled on Melville Island, which is high above the Arctic circle.

The character of the Diefenbaker Vision changed considerably when Alvin Hamilton was transferred to agriculture a year ago. While at Northern Affairs, Hamilton was not always right, but he was always exciting. Walter Dinsdale, his successor, is a gentle slump of a man who appears to be interested in the details of administrative efficiency rather than visionary planning.

Dinsdale, who got into the Commons by winning a by-election upset at Brandon, Man., in 1951, is the cabinet’s only active member of the Canadian Bandmasters Association. He still occasionally plays second cornet in the Ottawa Salvation Army band and is often asked to preach from local United Church pulpits. Before World War II he was a Salvation Army captain, then he joined the RC'AF where he earned a DFC. He lectured in political science at Brandon College before getting into politics. “People are critical because the north hasn’t been transformed overnight,” he says, “but nobody suggested that, nor can it be done. It’ll take a couple of decades to get our program really rolling, just as it required twenty to thirty years to open up the prairies.” * 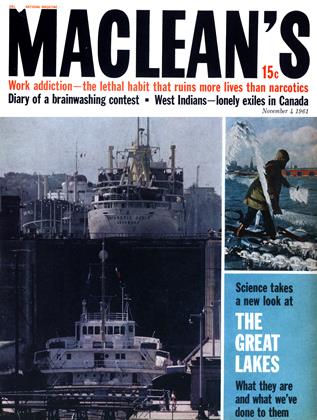