Since Wintergreen ran for president, that high office has been left respectfully alone by Broadway’s musical-comedy writers. Since John F. Kennedy’s campaign, though, two television-comedy writers have been working on “something between a satiric musical play and an orthodox musical comedy” that will, they hope, bring the president back to Broadway next season. What opened their eyes to the comic overtones of a presidential election? Well, the election itself, of course, but maybe the comedy hit them a little harder because they happen to be Canadians.

Frank Peppiatt and John Aylesworth were once a copy-writing team in a Toronto advertising agency. Then they were a variety-show writing team at the CBC. Now they are a comedy-writing team for American television performers, most particularly Perry Como.

In addition to writing the weekly Como show, they have just completed the script for a TV spectacular that will star July Garland. It will be directed by Norman Jewison, another Torontonian who produced some of the shows Peppiatt and Aylesworth wrote

at the CBC. Jewison is the man they want to direct their presidential songand-dance.

The theme of the comedy is the astonishing Kennedy family and the way it works as a team under the family slogan: “Second best is a loser.” The president will not be a comic figure, but he will be in the middle of some comic goings-on. FI is brother. Attorney General Robert Kennedy, will be represented by the show’s leading male dancer, whose big number will be a ten-minute ballet version of the Democratic national convention. One of the important roles will be that of Joseph P. Kennedy, multimillionaire patriarch of the Kennedy tribe.

Peppiatt and Aylesworth have the w'hole show outlined now. and two of the major songs are written. One of them is called “Help Me”—the president sings it to Mrs. Kennedy after learning that he has been elected. The show’s music is being w'ritten by Dick Williams, brother of singer Andy Williams for whom Peppiatt and Aylesworlh have also written TV shows. 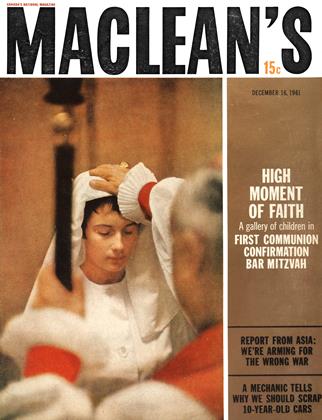