Can lain Macleod shape a new image for the Tories? Leslie F. Hannon IN LONDON December 2 1961

The British are on the eve of a political revolution. There'll be no barricades in the streets, no opposition leaders packed off to jail, no muzzling of the press. It will be just another of those quiet, civilized upheavals that, since the revolution of 1688. have fashioned the most copied system of government the world has ever known. The shape of things to come is already discernible and, by the time the next election is called about eighteen months from now, the change should be complete. It can best be described. for the outside world, as the death and rebirth of the British Tory. In political jargon, it is a significant step to the left by a ruling party of the right. Either way, it is an event of farreaching importance.

The ancient coalition that Prime Minister Harold Macmillan confidently expects to lead to its fourth successive election victory will still be called the Conservative Party—or, more accurately, the National Union of Conservative and Unionist Associations. The current vogue to accept and even flaunt the still more ancient label of ‘Tory" will continue. Labels matter little in Europe— British Tories haven’t even discussed the device of tacking, say, "Progressive" on to the party title that appealed to Canadian Conservatives eager to forget their depression regime.

But if the name’s the same, the party isn't. Although he appears to be safely in power with a majority of 100 seats. Macmillan chose this fine autumn to reset his party’s long-term course. In a few weeks, with a set of knuckledusters beneath his elegant gloves, he slapped down the old-style true-blue Tories who were supposedly the core of the party’s strength and thrust into the leadership limelight the man they hated most, lain Macleod.

Personally, Macmillan deftly pinched the best stuff from the platform of the troubled Labor opposition. In direct defiance of the hallowed Conservative hatred of planning and controls, he announced a ten-year plan for Britain that would raise the average income of the working man to $3.()()() a year (the current average is $2,200) and called for a national economic planning board from labor and business to prod and guide the country’s commerce. Earlier, he had cast the (.lie to tie Britain to the European Common Market—politically (and economically) the most radical decision taken here in this century.

The party’s right wing was clipped for good at the Brighton conference in October by the beautifully stage-managed operation that quashed the diehard opponents of the common market and quelled the reactionaries who wanted to bring flogging back to the prisons. If that didn’t tell the "old guard" where they stood, then the appointment of Iain Macleod as chairman of the party and leader of the House of Commons certainly did.

At 48. Macleod. a self-styled Tory radical, after two controversial years of "giving the empire away” as colonial secretary, is now' charged with the prime duty of engineering a Conservative victory next polling day. More than that, Macleod is now clearly much closer to acknowledgement as Macmillan's crown prince.

What sort of a man is lain Macleod? He has been in parliament for only eleven years — as compared, for instance. with R. A. Butler’s 32 years. At first look, he’s not a Macmillan man at all. In a cabinet notable for old Etonians and men with aristocratic titles or connections, he's odd man out. The son of a Scottish doctor, he went to school in Edinburgh and later to Cambridge University. When World War 11 began he enlisted as a private. Wounded before Dunkirk, he was shipped back to England. commissioned, and worked in a junior capacity on Montgomery’s invasion planning team. In 1941 he married Evelyn Blois, daughter of a Gloucestershire parson.

Macleod's first shot at entering parliament in 1945 went wide. Leaving the army a year later, he took a job in the Conservative Party’s research office. In 1950 he won a seat in the London suburbs and has increased his majority at the three subsequent general elections in 1951. 1955 and 1959.

It is a paradox that the two men who are now rivals—however friendly-—for the Tory leadership have been closely associated ever since Macleod first took up politics as a trade. Butler had been a potent force within the party organization since 1937. when Macleod. then only 24, was trying to carve out a business career, and the older man was chairman of the party when Macleod joined the central staff.

Once in the house, Macleod started to soar. Within two years he was on the front bench as Minister of Health. After another three years, he moved to the Ministry of Labor and National Serv-

ice. His services in these posts could, however, best be described as solid but unspectacular.

Physically, he has neither the courtly looks of a Macmillan nor the powerful homeliness of a Churchill: he looks as if he could be a successful trade-union secretary or chief clerk in a big stockbroker's office. His friends, and his few enemies, say that he is a brilliant organizer ami a tireless worker. Some add that he's always been something of a reformer—and that's the real key to his success.

What sort of a reformer is this matter-of-fact Scot? As party boss, how will he influence Conservatism in its dramatic new course? I put these questions to a senior Conservative official who has known Macleod since boyhood.

"These are tough questions," my informant said, "because Iain is difficult to describe in popular terms. You see. he’s a relatively new kind of bird. 1 know lots of people overseas still have that cartoonist’s conception of the British Tory harumphing in his club, damning the pesky blacks, and bewailing the fact that these working fellows don’t seem to know their place. Macleod is what he says he is. a Tory radical. He's a working fellow himself— dependent on his salary. Until recently he lived in a quite ordinary bungalow in his constituency and now he has a modest apartment in town. Even though his wife is partially crippled from a polio attack, they have no permanent help at home. He likes to have a fivebob flutter on the horses now and then. There may still be a lot of aristocrats in the government, but more than any

other man Macleod has come to typify the change in the real source of the party’s power.”

He sent a secretary scurrying for some documents. "1 suppose lain first emerged as a reformer when he was the moving spirit among the group of backbenchers who published this "One Nation’ pamphlet. He was only 36 then and in his first year as an MP."

Reading that document today doesn't provide much of a glimpse of a new dawn breaking—it is an earnest study of then current problems in the social services, housing, education, industry ami local government, followed by a set of woolly and hopeful suggestions. But its very earnestness, and its title, struck sparks in an electorate already weary of the class legislation of the socialist postwar years. Macleod and his colleagues sensed that the British were ripe to drop their hoary conceptions of a two-class society, the hereditary rich and the hereditary poor, and welcome a philosophy that offered a middle road. They were not shouting for the impossible—equality for all— but they were insisting on the feasible -—equal opportunity for all. Macleod repeats today: “Of one thing I’m certain: people don't want to be equal. What they want is opportunity—for themselves and for their children."

Although Macleod as party chairman bears no official responsibility in policy making, the first item in Macmillan's newten-year plan—slum clearance— typifies the legislation he desires. The government's impending moves to tax profits on property deals and bring in a capital gains levy are also moves toward his cherished "one nation."

Sweeping aside his slim pile of Macleod documents, the Conservative official pointed out the second ace in Macleod's hand: his tremendous popularity among the youth of the party. "You can’t document it exactly." he said, "but lain has become the symbol of progress to hundreds of thousands of young Tories. They like his middle-class looks •—most of them are middle-class themselves. They see him as perhaps some kind of bulwark against privilege that was an obstacle to their families in the past. They think he's the greatest colonial secretary Britain's ever had because he has helped so many former colonies to independence." It's on record that, at the first national convention of young Conservatives early in the year. Macleod was cheered to the echo in the presence of Macmillan and Butler and other senior ministers. E'resh cheers stopped every speech in which Macleod's name was mentioned.

Observers looking ahead at Macleod's new task of reshaping the Tory machine expect squalls when he sits down in the committee rooms of the market towns with the entrenched shellbacks of the party, in Newbury. Berks., for instance, awaits Sir Anthony Hurd, MP. who accuses Macleod of betraying the w'hite settlers of Kenya and blames him for not cutting Jomo Kenyatta down to size. But Macleod has a potent body running interference for him. The Conservative central office, his own alma mater, is “encouraging" the constituency associations to unload the shellbacks by ruling that the tenure of a chairman be limited to three y ears. 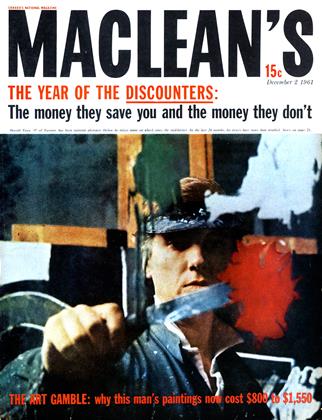