German conquest in Ireland: a Riviera of their own Leslie F. Hannon February 11 1961

Dublin—This spring the first luxury chalets of a modern holiday resort will be built on a peninsula jutting into beautiful Clew Bay on the western coast of the Irish Republic. They’ll be in strange contrast to the primitive stone cottages of the County Mayo natives.

Stranger still, no Irishman, how'ever wealthy, will be luxuriating in the hotand-cold air-conditioning or enjoying the view over the island-studded bay. For this resort is for Germans only.

Developed by a syndicate of four Hamburg businessmen, the ClewBay hideaway is only one of several tracts of spectacular Irish coastline bought up quietly since the war for the exclusive use of well-heeled West German executives and their families. Two thousand choice acres have been acquired in West Cork in mixed lots for resorts or individual luxury summer homes. Agents for German buyers are bidding for thousands of other acres.

With Germany’s national income up a roaring 11% in 1960 and with building labor abundantly available at $25 a week in Ireland's depressed west, the takeover isn’t likely to ease up. The Irish are in a cleft stick. They’re furious about this display of German arrogance and hate to find themselves shut out from some of the most scenic spots of their own country, but they need the money. The Clew Bay development alone will bring in over $250,000 in its first year. The temptation is too strong, especially since Premier Séan Lemass is leading a drive to lift the republic out of chronic depression.

But the Germans are still getting some argument. The West Cork Development Board realizes that the natural beauty of the coastline is one of the area’s greatest assets and doesn’t want to have other overseas visitors shut out of it. “We have a lot of coast, but the Germans want to pick the best of it,” a member complained.

This German love affair with Ireland grew from Irish neutrality in the last war. which gave the Nazis a dress-circle seat in Dublin from which to keep tabs on Britain. Today, apart from the exclusive holiday havens, German money is heavily invested in Irish textiles, heavy machinery, steel rolling mills and ballpoint pens. This kind of intrusion the Irish welcome with open arms. But not all foreign influences are so attractive. While I was here, an eight-foot swastika was daubed on a synagogue, and whips and vicious phrases in German were painted on the main doors.

If Paris police can help us, why not themselves?

paris—“If Inspector Gaubiac has any luck cleaning up the crime wave in Montreal,” a friend said to me recently, “send him back here to have another try in Paris.”

André Gaubiac. former head of the Sûreté, and Commander Andrew Way of Scotland Yard had just accepted Mayor Jean Drapeau’s invitation to advise on Montreal police reform. In Canada, Gaubiac was suitably greeted with a $20,000 robbery. Had he stayed home,

though, he would have begun his year in the midst of bigger stuff. One gang walked into a family-allowance office and walked out again with francs worth $325,000. A smash-and-grab epidemic cleaned out jewelers’ windows in several Paris suburbs, and safecrackers were busy all over the country.

With the Algerian terrorists apparently observing a truce in their bombings and assassinations in the capital while General de Gaulle’s referendum ran its course, the policemen looked forward to a respite. But instead, the braying of the tiny piebald Paris patrol cars seldom seemed to cease echoing.

Instead of advising others, why can’t the French police get their own house in order? According to Maurice Papon, Gaubiac’s successor, there are three main reasons. First, a shortage of staff and a shortage of money, he told reporters. He can allot only 15 cars to his Paris flying squad. Second, too many riots and political demonstrations. The maintenance of public order has top priority. Third, the young police officers of the ’60s don’t know a crook from a cabbage. They are ashamed or embarrassed to go into the gutter dives where the oldtime cops used to fish for information. Diplomatically and sensibly, Papon didn’t complain about the drain on his manpower in enforcing the flood of decrees by which the ascetic de Gaulle is trying to clean up France. On top of the Algerian problem, the general is also tackling homosexuality, prostitution and alcoholism. When the government withdrew the special fiche for reg-

istered prostitutes, 80 of them demonstrated outside the Palais Bourbon, and Papon's men had to carry them off screaming. They also carried off some perfectly respectable ladies who just happened to be passing. Without even a decent warning, the police are now raiding Paris’ innumerable small hotels at all hours.

And de Gaulle isn't fooling. The top fine for living on immoral earnings in the new France is 250.000 new francs. That’s over $50,000. Also, they take away your driving license.

Put a big price on anything—Britons will buy it

London—Speaking at the Dorchester Hotel recently, George Hees. Canada’s minister of Trade and Commerce, seemed to find a crumb of comfort in referring to a hesitancy in the British economy.

Layoffs and short time in the car industry here were probably in his mind, but after six months’ residence in England I still can’t help being astonished at the obvious and continuing high level of prosperity. Money is being spent here in chunks that bring to mind the tycoons of the late 19th century.

There was no hesitancy, for instance, in the sale of an almost unknown and unsigned Frans Hals portrait at Sotheby’s for over half a million dollars. It was bought by A. E. Allnatt, an equally

unknown building contractor from Willesden, a London suburb. Allnatt. it turned out, was also the anonymous purchaser. a year earlier, of an Adoration of the Magi by Rubens, for which he paid $800,000 — a world record for a single picture.

Allnat. who buys pictures because he is very fond of them, has laid out nearly $134 million for pictures in 18 months. When he wants a picture his agent simply bids until he gets it. The Frans Hals brought more than three times the amount of the most optimistic prediction. The sums paid that same day startled even Sotheby’s blasé staff. The day's total was well over a million dollars.

That was a rare day. Fven at the 10% commission that is standard in London (as against the 20% charged in American salesrooms) Sotheby’s picked up $100.000. But only a week or two earlier they sold a stack of impressionists and moderns for a total of roughly $114 million.

What else will Britain's big spenders buy? Well, a commode by an unknown maker but with the magic tag Louis Quinze was borne home by somebody for $50.000. At a book sale someone coughed up $2.200 for a routine book on George Bernard Shaw that Sir Max Beerbohm had improved or ruined (depending on your tastes) by adding insulting comments in the margins. A oneday furniture sale at Christie’s totaled $300.000.

There’s no sign of hesitancy, either, in Britain's house-and-land boom. The steady population increase and the zoom in standards of living over the last five years keep a steady pressure on every acre of land and every habitable room. Prices for average family houses last year were 10% above 1959 figures, according to London real-estate men.

Luxury flats in London are bringing prices that would make Park Avenue shudder. A four-bedroom flat that once belonged to actor-dancer Jack Buchanan and looks into Grosvenor Square is currently available for $125.000 on a 99year lease. A niece of Lady Astor’s confidently put her Mayfair house on the rental market the other day at $1.700 a month. Of course it has an American kitchen.

Building land in tightly zoned southern England has skyrocketed even higher and faster. Speculators have picked up profits of 200% and 300%, sometimes within a few weeks. Over $40,000 an acre was paid recently for industrial land, and $20,000 is common.

In this fiercely taxed country, where the average wage is forty dollars a week, where does the big money come from? Capital gains. ★ 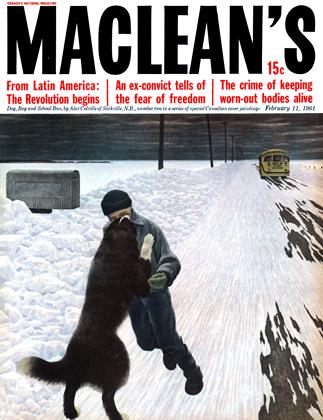