A Paris original for $200? Yes, but only in Canada

To get one, a woman must be slim —and fast on her feet

Without fanfare — or even so much as a small ad in a newspaper — a few Canadian stores offer the greatest fashion bargains in North America. Known as "bonded models,” they are suits, coats and dresses made by Europe's leading designers — not what the trade calls line-for-line copies, or adaptations, but the originals themselves, with every pleat, tuck and button in place, exactly as they were created in Paris or Rome.

About 500 bonded models arrive each year in Montreal, Toronto and occasionally Vancouver and Ottawa, by a roundabout route. They are purchased in Europe by U. S. dress manufacturers and department-store buyers who want to copy them in quantity. They enter the U. S. in bond, which means they can't be legally sold there. A heavy metal tag sewn into the lining identifies each garment as a bonded model. The bond is good for six months and can be renewed once — for only six months more. When the bond expires the garment can be sold anywhere but in the U. S.

A few Canadian stores snap them up as bargains. The majority go to Creed's in Toronto, Ogilvy's in Montreal, and the Holt Renfrew stores, which pay $100 to $200 apiece for them. The low wholesale price means low duty. Thus the bonded models can come out of bond in Canada and make a profit for the stores, even at retail prices as low as a third of what some of the world’s best-dressed women pay in Europe.

A young Toronto matron picked up a Balenciaga suit for about $250. This suit (and the right to copy it) had cost a New York manufacturer about $1.500; a private customer in Paris would have paid $700 for it.

A I.anvin ball gown that would have cost Princess Grace of Monaco $1.100 cost a Montreal society hostess $375.

If Marlene Dietrich had decided not to buy the Balmain coat that cost her $850 on the Rue François Premier, it might have sold in Canada for $325.

Even custom copies cost a lot more than that in Canada. Alvin Walker, president of Holt Renfrew, says that if his store makes a custom copy of a Dior dress, the customer pays a price “roughly equal to the Paris price, plus the Canadian customs duty,” which can run as high as 46% of the total cost.

Who buys bonded models? Mostly wives of well-to-do (but not wealthy) businessmen. Few career girls can afford $200, bargain price or not; and most wealthy matrons who are fashion-conscious won’t settle for bonded clothes. For one thing, they’re second-hand. By the time they enter Canada, they have been worn by professional models (usually in both Europe and the U.S.). handled many times, and, in some cases, even taken apart and reassembled.

And not every woman can squeeze into one. Each garment is made to fit a certain French or Italian mannequin, who may be a tiny size 8 or even smaller.

W'hat’s more, by the time a bonded model reaches Canada, it’s not necessarily the latest word in fashion. Usually it has been in the U. S. at least four months, and some bonded models are

The biggest batches come in twice a year: in April or May. following the Paris collection in January; and late fall, after the Paris showings in August. Although women can—and do—walk in off the street and buy them, most bonded models go to favored customers, who are often tipped off by phone calls from store clerks.

Besides being willowy and well-to-do, the women who capture most of these bargains are fast on their feet. It’s not unusual for a store to sell out a w'hole batch of bonded models in one day.

About vitamins you don’t really need

The amount Canadians spend on synthetic vitamin preparations, already $50 million a year, is steadily rising. Rising just as steadily, apparently, is a feeling in the medical profession that these “preparations” — pills — are not really accomplishing much. Here is an interview with Dr. Jean T. Webb, head of the duld and maternal health division of the federal department of health and welfare.

Q: Precisely what, Dr. Webb, is causing the doctors' dissatisfaction with the rising intake of vitamin pills?

A: Two things. First, there’s a great deal of waste. Many adults are taking pills that contain many times their daily requirements of basic vitamins: their

bodies can neither use nor store the excess. But more serious, there are still infants who aren’t getting enough vitamins. There has been an alarming upsurge of infantile scurvy in recent years, even in some of our biggest cities.

Q: How could that happen? Surely it isn't from taking too many vitamins?

A: No it’s not. But before the onslaught of publicity for synthetic vitamins, bottle-fed babies — breast-fed babies get all the vitamins they need — got their vitamin C' from orange juice. It’s vitamin C that prevents infantile scurvy. Now, with all the multiple vitamin preparations available, each “more multiple” than the other, too many parents feed their babies vitamin drops and concentrates.

Q: What’s wrong with that?

A: Some of them don’t know what they're doing. Many multiple vitamin

tablets contain ascorbic acid, the synthetic vitamin C. But many do not. Mothers don’t realize this fact and they don't make certain that their children get the necessary minimum of ascorbic acid a day: 30 milligrams. As a recent study conducted by the University of Toronto and Toronto's Hospital for Sick Children pointed out: "When faced with such an array of widely advertised, variously priced medications it is not surprising that the mother may become confused.”

Q: That makes it sound as if it were the advertising that is to blame.

A: I think some t\pes of advertising are to blame. Advertising based on the fear that unless multiple vitamin preparations are taken you are starving your body is downright misleading. Adults can get all the vitamins they need from a varied diet that includes fruit, vegetables and dairy products.

Q: But surely there are some adults who need vitamin supplements.

A: Of course there are. Their cases should have medical management. If there is a vitamin deficiency, it takes a qualified doctor to diagnose it and prescribe for it.

Q: Have you any specific recommendations for combating this trend?

A: Well, as far as babies are concerned I would advocate, as did the Toronto study, a return to the old-fashioned orange juice. And. again as the report pointed out. I’d like to see more emphatic and more specific advice from doctors about the need for vitamin C.

has come up with a cold remedy that uses five different pills — including a big dose of vitamin C — at a time. He gave out five-pill packets to 6.000 factory workers for a year and claims the treatment stopped nine out of ten colds when taken at the first sniffle. The pills arc three drugs similar to aspirin, an antibiotic throat lozenge and a tablet containing as much vitamin C as a crate of oranges.

Each Monday evening this winter, 7,000 Canadian farmers and their wives have gathered in 400 groups across the country to read the same pamphlet, listen to the same half-hour radio broadcast, then debate such questions as "Rural services — who should pay?” and “Inflation — robber or benefactor?”

The program they have been hearing is the C'BC’s Farm Forum, and. since it is 20 years old, it makes familiar listening for many. So familiar, in fact, that the achievements it helped bring about are now almost taken for granted.

In 1949-50, after eight years of steady growth. Farm Forum had almost 21,000 members in 1.600 groups. But for many farmers, the program had begun to outlive its usefulness, and membership was declining when UNESCO began spread-

ing the idea abroad in 1954. Japan. South Africa and several other countries picked up the idea, which is still spreading. So far, its greatest success abroad has been in India, where the first programs were broadcast in 1956. Listeners in 150 villages in the Poona region began their first effective attacks on such problems as malaria (through mosquito control ).

Now. having long since learned how to solve many of their own problems. Canadian Farm Forum members are out to help farmers abroad. One Farm Forum project in Canada this year is to have every local group buy one radio for a village in India. — ft IT R MARTIN

About political press releases: Most of them wind up in editorial wastebaskets, but the Liberals have come up with a new way to get their message across: put it on film. Delegates to the party’s recent convention in Ottawa were interviewed for three minutes in front of a movie camera. The films were processed on the spot and sent out the same night for newscasts on private TV stations in the delegate's home area. Now the Tories plan to copy the tactic at their convention next month.

About golf greens: A manufacturer has designed an indoor one for putters who now dig divots in living-room rugs. It has rubber cups, the illusion of sand traps and water hazards, and raised sections to give the ball a maddeningly realistic "bad lie.” Cost: about $150.

About tires: Two new types, both touted as revolutionary advances, will be on the streets soon. In Canada. Atlas has distributing rights to an American-developed tire impregnated with pellets of a secret compound; the pellets are said to improve traction to the extent that snow tires could become obsolete for city driving. In Germany, a manufacturer is turning out a new type of spare that lies flat around the wheel rim. When a tire is punctured, the driver uses a compressed-air cylinder (standard equipment with the tube) to inflate the spare. The spare tube will last 600 miles.

About Communist propaganda: The

Russians hope Canadians will start paying for it. The Soviet embassy in Ottawa used to send out free a monthly magazine called USSR Today. Now it’s called the Soviet Union Today and a year’s subscription costs $1.40.

About missiles: Their names seem to be taking on the national character of the countries that build them. While Americans have their heroic Atlas and Titan, the British have at least two with enigmatic, code-like names: Red Shoes and Blue Water. The French? But, of course: Monica and Véronique. 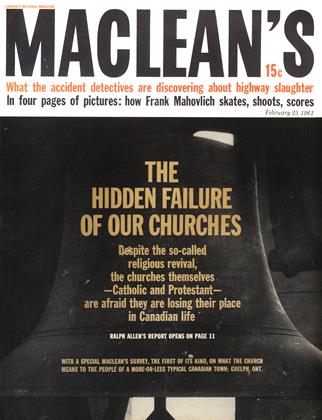