Male teachers look with horror at Momism on the march

Forty-three years after they got the vote, the women of Britain next month score another victory in their campaign for equality: 220,000 female teachers in the state education system will move up to the salary paid male teachers. This will match the achievement of the 200,000 women in the civil service who graduated to equal pay last January 1 after a five-year program of yearly increases.

The teachers didn’t have it easy. Charles Curran, Conservative MP for Uxbridge, a champion of women’s rights, says he knows schoolmasters who feel the new move will cause men to quit teaching. Already three teachers out of every five in Britain are female. Curran quotes male schoolteachers as saying, “Look at the United States. Over there teaching has become a woman’s job. Consequently the American boy brought up by females only turns into a spoiled, unsmacked sissy. Do you want that to happen here?”

Curran does not believe Englishmen will cease following in the footsteps of Mr. Chips. They might if teaching were the only profession where women got equal financial reward for their efforts. But, he says, the more the principle of equal pay for equal w'ork spreads throughout the country, the less likely it is that the schools will become strongholds of the despised Momism.

What is the current situation in industry generally? A check at the Ministry of Labor and the Trades Union Congress reveals a pattern of some isolated progress, some stubborn prejudice, but generally an inching toward equality in wages. In manufacturing industries the average male pay is $42 a week, the female $20.35. Even so, low as it may appear, the average pay of female labor in industry rose 5.6% during the last 12-month period. Some employers still argue that a man should get higher wages as a right because he is usually supporting a family. This theory is losing its force in a country where a third of the entire working force is female. The last recorded total of working women was 8,272,000, and a third of them were working housewives. Without the extra pay cheque they bring in, their families could never afford a car or perhaps a television set and certainly couldn’t accumulate the down payment for a house. 1 asked a press officer at the TUC, a woman, if she was paid the same rate as a man doing the same kind of job. “No,” she said firmly. Then she added: “I didn’t mean to sound so emphatic.”

Already hot in TV, Ted Kotcheff heads for the stage

led Kotcheff, a burly 29-year-old dynamo who once worked in the Spam department of Swift’s slaughterhouse in Toronto, is currently one of the hottest

properties in the stage and television world here. He has come to quick fame and some fortune as a director of realistic television drama—23 plays in three and a half seasons, most of them written by the country’s leading young dramatists. Now he has accepted the challenge of a West End play. Early next month he will direct Progress to the Park, by TV playwright Alun Owen, in a major West End theatre. And he’s already looking beyond that. Next fall he expects to direct in the West End a play still being written by Clive Exton. For the latter venture he and Exton have formed a company with their agent and an angel. The director and the dramatist contribute talent, the other two cash. Kotcheff sincerely detests talking about money, but if the company deal prospers he would stand to pick up about 7 to 8% of the profit. For the son of a couple of Bulgarian immigrants that would be a tidy packet.

Perhaps one has to live in England to appreciate The Times, but Kotcheff has been here long enough merely to grin when he finds himself named in its columns as Mr. William Kotcheff. He was christened William Theodore in Toronto, but has been Ted all his life. Even being in The Times, of course, is a sign of Kotcheff’s fame over here, and recently the newspaper devoted a twocolumn piece to Kotcheff, describing him as “most compelling.”

I found Ted Kotcheff in bed with bronchitis in his Hampstead home, a

high-ceilinged five-room fiat in a row of Victorian houses. He bounded out of bed to fix me a drink, turned the jam session on the radio down a notch, ran a hand through his wild mop of hair, and quickly made me aware that his shoulders do not carry any of the chips that so many Canadian theatrical people bring over here with them. He is complimentary and grateful to the CBC, which gave him a job as a stagehand one week before TV began in Canada. He was then nearly 21. After two years he was made a floor manager. Then for two years he directed. When commercial TV loomed in Britain Kotcheff got the chance to direct a play for a TV company here called ABC. The ABC people liked his show so much they made him an attractive offer, much above his CBC rate, but Kotcheff returned to Canada to fill out a CBC contract. He came over for the 1958 season, and each season since has been working in TV at ever-increasing sums.

Most of the stuff Kotcheff molds for the TV screen would startle or numb many Canadian viewers. The great strength of television, he says, is the lack of critical sophistication of much of its audience. If a play by Harold Pinter (of The Caretaker fame) is put on, most of the viewers are not going to think, “Ah, now for an hour of pretty demanding culture.” They judge it for what it is worth to them as dramatic entertainment. When Kotcheff did Alun Owen’s TV play, No Tram to Lime Street, he

and Owen went to Liverpool, where the play was set. and spent about four days roaming around the sailors’ pubs, talking to the riffraff and the respectable. Their new play that braves the West End next month is also set in Liverpool and deals with religious hatreds, class discriminations and other ferments in the port city’s multi-racial slums. As soon as his bronchitis cleared up Kotcheff was off with Owen for another atmospheric bath along the Liverpool waterfront. I suggested he should next consider a play on athletics. His waistline is showing the effect of his Liverpudlian research.

Will “hopping flu” hop to Canada?

In the snows' and slush of late winter, Canadians had better beware a new enemy — hopping flu. This is the name some doctors in the Midlands have given to a variant of the Asian flu bug isolated in this year’s influenza outbreak. It has been killing an average of fifty people a day. Judging by the latest figures compiled by the Ministry of Health, its virulence doesn’t match that of the bug of February 1959, which killed 3,292 people that month, but the winter here has been very mild so far. with no snow in the south of England by early February. This year the bug seems to be hopping around the country with little pattern to its spread. It was first noted in the West Midlands, including the industrial city of Birmingham, before Christmas. It began hopping around Lancashire, the North Midlands and the West Riding of Yorkshire. Within six weeks it was in Leeds, Belfast, Burtonon-Trent. Liverpool. The medical officer of health in Leeds, Dr. G. E. Welch, reported flu had reached the epidemic stage there. The Asian strain that began its lethal journey in Singapore in 1957 has been isolated in Leeds. The ministry dubs it a close cousin of the 1957-58 killer, and so far its most serious cases have been people over 55; people under 30 seem more or less immune.

In Liverpool the docks were slowed down with more than 400 men at home sick. British Railways reported 584 men ill in the region. So many nurses were sick that at least one hospital had to close down some of its space. As the bug hopped south, London’s emergency bed service issued a red warning, and three hundred hospitals began to admit only urgent cases, keeping as many beds as possible available for epidemic victims. It hit in early February. In four days 6,930 applications for flu beds were made and over 90% of cases were admitted. As this column went to press the latest week’s death toll stood at 699. As one sufferer I can say that this year's flu bug seems to produce recurrent headaches and an off-and-on feeling of fatigue, especially in the legs.

I’ve been in good and exalted company. Other flu sufferers have been Princess Margaret, the Duchess of Kent, the Duke of Devonshire, the Duke and Duchess of Gloucester, Earl Alexander of Tunis and Lady Alexander, Benjamin Britten and the whole back line of the Newbury rugby football team. ^ 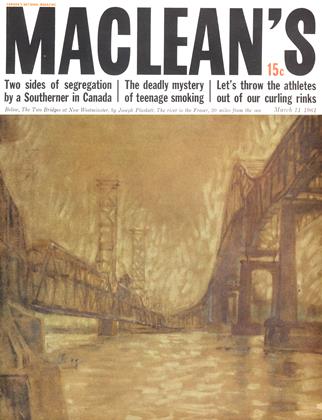