“Dull” schools prompt B.C. parents to start their own

“Dull” schools prompt B.C. parents to start their own

Here's what USSR books, magazines say about us

Starving workers are falling like flies on the sidewalks of Canadian cities, but Tim Buck and his 4.000 Communist Party members will soon win the struggle to establish an earthly paradise throughout North America.

Although even Buck himself might not instantly recognize this description of the current Canadian scene, it's an example of the things the people of the Soviet Union are being told in publications not intended for export.

In the Soviet press. Buck is Canada’s No. 1 citizen. He gets eight mentions in the Modern History of Canada published last year in Russia. The book gives John Diefenbaker. Louis St. Laurent and Mackenzie King one mention apiece, explaining that they have played only minor parts in Canadian events.

Canadian hockey players and whisky distillers share the blame for the degenerate habits of stilyagi — Soviet teddy boys or beatniks. A recent cartoon in

a Soviet periodical showed two stilyagi rocking V rolling in a not-quiteempty bottle of Canadian Club. The accompanying story explained that young people in Russia got their first taste of Canadian whisky during visits of Canadian hockey teams.

Sacrilège is apparently as shocking to the Kremlin as it is to the Vatican. A recent cartoon in Krokodil, the famous satirical magazine, shows a Canadian soldier who has taken over a monastery in Europe. He is drinking (yes.

again) whisky under the outstretched arm of a statue of the Virgin Mary.

A Soviet book called Anglo-American Controversies in Canada reveals that Uncle Sam keeps Canadians under constant watch through a vast network of FBI agents in Canada, and that industrial layoffs are causing many suicides among workers.

But there are signs that the Russians are beginning to think the Western economies are not all bad. Ads in Soviet periodicals now show some Madison Avenue influences, and Vneshniaia Torgovlia, a monthly journal of foreign trade, recently carried two long, approving articles on Western advertising patterns and techniques. — LE MAGAZINE 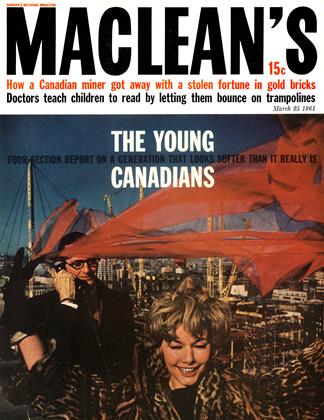