Why Anti-Canadian feelings are growing in the U.S. Ian Sclanders April 22 1961

Washington—It's a Canadian habit to take it for granted that the Americans like us. Until lately we've had no reason for not taking this for granted. In the U. S. we could always count on being greeted as old and trusted friends simply because we were from Canada.

The Americans are still cordial, outwardly at least, but while the smile that accompanies the handshake shows the teeth, it isn’t necessarily reflected in the eyes these days. You don’t have to be psychic to sense that a little of the warmth has gone, that our neighbors are less fond of us than they were.

Many of them are a shade too eager to ask questions that are loaded and reproachful and reveal that Canada s policies and actions have been widely misrepresented, or misunderstood, or both, south of the international boundary. Here are three examples of questions I've been asked:

* Why is Canada shipping weapons to C astro?

Why has Canada withdrawn from NORAD and do you expect Uncle Sam to shoulder the whole responsibility for the defense of this continent? K" Why did your government impose a confiscatory tax on American investors?

Canada, of course, isn't shipping weapons to Castro, hasn t withdrawn from North American Air Defense, and is not imposing a confiscatory tax on American investors. I suspect that a lot of Americans who should really know better believe these things because they are happy, right now, to believe anything that is derogatory to C añada.

We might as well face the fact that anti-Canadianism is far more prevalent in the United States at the moment than it has been in a long, long while. It would be an exaggeration to say that there’s a wave of anti-Canadianism. 1 he right word is ripple.

But the ripple is big enough to worry about and, indeed, is worrying our diplomats in Washington, officials of Canada’s Department of Trade and Commerce, and Canadian businessmen who do business with the U. S. It could easily grow, play havoc with our tourist trade, grease the way for higher tariff's against Canadian products, deprive our factories of U. S. orders, and lead to all sorts of undesirable complications.

This menacing ripple has been visible only in recent months but it began years before it could be seen. What started it? Nobody can say for sure but millions of Americans, traveling in Canada for business or pleasure, were antagonized when the Canadian dollar stood at a fairly stiff premium over the U. S. dollar. It was an article of faith with them that their dollar was the best and soundest in the world, so it shook them and stung their pride to learn that the Canadian dollar was worth more.

Then there was Canadian anti-Americanism. Most Canadians were shocked

and disgusted by Senator Joseph McCarthy, were alarmed by John Foster Dulles’s dangerous game of brinkmanship. and felt that the warlike utterances of U. S. military men jeopardized peace. So Americans, visiting Canada, were confronted with the same kind of loaded and reproachful questions that Canadians are being asked today in the United States. They can't have liked it very much and they must have been annoyed, to put it mildly, at the attitude of moral superiority that Canadians assumed—-an attitude that colored much that was printed about the U. S. in Canada’s press.

The odd part of it was that Americans, until last September or October, acted as though they were unaware of anti-Americanism in Canada. It wasn't publicized in the U. S. newspapers and was barely mentioned by U. S. politicians. What first brought it into the open was the erroneous report that Canada intended to profit richly from the U. S. embargo on the shipment of most goods to Cuba, and to supply Cuba with items on the banned list. The report has been denied repeatedly and there is an abundance of evidence to prove that Canada isn't cashing in on the embargo, yet a substantial segment of the American population refuses to be convinced.

After the Cuban mixup, which seriously harmed Canada’s prestige among the uninformed, came Finance Minister Donald Fleming’s baby budget, which increased the withholding tax on the returns from foreign investments—chiefly U. S. investments—in Canada. As Fleming explained, the former low withholding tax had been in the nature of a bonus, to attract foreign capital. Now it had been decided to treat foreign capital the same as domestic capital. No discrimination was involved. Yet in this, as

WHY WE GOT MAD AT THEM

WHY THEY’RE GETTING MAD AT US

in the Cuban issue, Cañada was and is accused of being unfair to Americans.

Meanwhile the Liberal party, at a national convention, adopted a resolution which, if implemented, would restrict but would not terminate Canada’s participation in NORAD. The antiCanadian elements in the U. S. seemed unable to comprehend that the Liberal party was not the government but the opposition, or that the resolution didn't propose complete withdrawal from NORAD. So millions of Americans seem to believe Canada has scrapped its air force, left NORAD. and piled the whole burden of North American defense on Uncle Sam.

T he ordinary American attributes his version of Canada's Cuban policy, fiscal policy and defense policy to anti-Americanism and has somehow sold himself the notion that this anti-Americanism in Canada is a brand-new phenomenon. He professes to be perplexed, bew ildered and hurt by it. Why, he asks, is solid, faithful Canada behaving this way?

Several U. S. reporters have been sent to Canada to find out what’s gone wrong. The answers they’ve produced have not been entirely accurate.

They're inclined to stress Canada's unemployment and its economic difficulties, and to infer that anti-Americanism stems from Canada’s desire to make the U. S. a scapegoat for its troubles. For instance, one article in a Cleveland Plain Dealer series on "Why don’t Canadians like us?" was headed, "Criticism of U. S. aggravated by slump."

The Cincinatti Enquirer said, in an editorial, that it was aware that Canada was having heavy weather economically. This helped account for the rise of Canadian nationalism. But. the Enquirer added, “extreme nationalism such as we

find in Nehru’s India or the African bush seems out of character when we find it in Canadians ..."

A Chicago Tribune editorial also ascribed “pro-Canadianism, which is a pleasant way of saying anti-Americanism." to “unemployment and a national budget deficit.”

What the Plain Dealer, the Enquirer and the Tribune all overlooked was that anti-Americanism in Canada cropped up before the recession and while we were in the midst of a boom. So did an antiwar sentiment. Recession has not been a major factor in anti-Americanism.

Since last fall there have been dozens of editorials like those of the Enquirer and the Tribune. There have been antiCanadian letters to the editor, too. Here's a sample in the Plain Dealer:

"Sir: With regard to the articles on why Canadians do not like us, so far as 1 am concerned the feeling is mutual. They take us for every dime they can. and by every act and deed they show their contempt for us.”

It’s not all unfavorable

I don't want to give the impression that all or even most of the items printed about Canada in U.S. papers are unfavorable.

The truth is just the reverse. Most of the editorials and letters are favorable. There have been many editorials like one in the Milwaukee Journal, which declared in clear terms that "the Canadian government has been meticulous in its control of sales to Cuba for civilian uses only." that there could be no valid complaints against the increase in the withholding tax on foreign investments in Canada since it was not discriminatory, and that Americans have no right to expect Canada to be a "submissive satellite” of the U. S. and arouse a natural resentment when they do. There have been many editorials like the one in the New York Times that spoke of “the supreme importance of C añada to us and us to Canada," and said: "Geography has fixed it so that we sink or swim together .... We have every reason on both sides of the border for friendly co-operation."

Unfortunately, the editorials and letters that condemn Canada are more likely to be remembered by readers than those that explain or defend our position—especially since there is. undoubtedly, more anti-Canadianism in the U. S. today than there has been in decades.

Part of this anti-Canadianism is linked with Canada’s determination to be independent and set its own course. Not much can be done about that, because this determination will almost certainly grow stronger, not weaker. But another part of the anti-Canadianism is a reaction to Canada’s anti-Americanism. The early indications are that the Kennedy administration appeals far more to Canadians than the Eisenhower administration. and that President Kennedy will exert himself to improve relations between the two countries. If this is so, anti-Americanism will subside, and there should be a corresponding decrease in anti-Canadianism, although it's unlikely that we will once more be able to take it for granted, as we used to, that all Americans like us. ★ 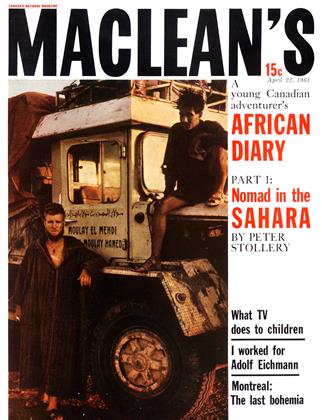