ONE-EYED JACKS: Actor Marlon Brando’s long-awaited debut as a screen director may not quite justify all the ballyhoo that went w'ith it. but

the resulting big-budget western is a gripping film, put together with uncommon vitality and inte1ligence. Brando himself (doing a lot of that mumbling again. I regret to report) is a striking figure as a whose dead-

slow-burning gunfighter whose deadly foe is a sheriff (Karl Malden) in Old California.

ONE HUNDRED AND ONE DALMATIANS: This feature-length cartoon from the Walt Disney factory is one of the master’s best in years— surefire for the kiddies and almost certain to tickle most adults as well. Also from Disney is The AbsentMinded Professor, a live-action comedy starring Fred MacMurray as the inventor of “(lubber.” a gravity-defying substance. (With its aid, basketball players leap right over their opponents’ heads and a J in Lizzie flies like a jet.) Two or three individual scenes are hilarious but the joke, for me, wears awfully thin before the finish.

OPERATION EICHMANN: Partly fictitious rather than a sober recital of actual events, this cloak-and-dagger thriller nonetheless carries a potent wallop at the emotions. Werner Klemperer convincingly portrays the hated chief of Hitler’s Jew-killing agency, captured last year in South America by Israeli avengers. The picture was made in Hollywood but is

laudably free of plot distortions designed to glorify Uncle Sam. The death-camp episodes are dismaying without wallowing in either bathos or sadism.

SANCTUARY: A package of costly trash from Hollywood, sketchily based on two of William Faulkner's novels about the decadent Deep South. Screenwriter James Poe and British director Tony Richardson seem to have tried to clean it up without getting rid of the dirt, and the result is mainly both pretentious and dull. Lee Remick is the governor's daughter who dabbles in prostitution, and Yves Montand is the Cajun primitive who holds her in thrall.

^ The Angry Silence ^ The Entertainer * Exodus

^ The Facts of Life ** Parrish ^ Tunes of Glory 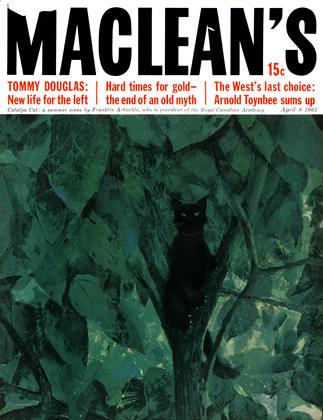