Why Kennedy will try to enlist John Diefenbaker as his next New Frontiersman Peter C. Newman May 20 1961

As fellow politicians, John Kennedy and John Diefenbaker belong to different generations and vastly different schools of conduct. But both men owe their power to the same unique personal quality: the ability to stir within their electorates a ferment of rising political expectations.

This link between Diefenbaker’s Vision and Kennedy’s New Frontier is about to be tested at the Ottawa conference between the two leaders. During the meetings, the U. S. president is expected to challenge the Canadian prime minister to follow his example of extending the prestige and glitter of the New Frontier into imaginative programs for aiding the world’s underdeveloped areas.

Since he took office, Kennedy has reoriented and revitalized U. S. foreign-aid commitments. He is known to want Canada to follow suit. An appeal based on the internationalizing of the Diefenbaker Vision may prove difficult to resist.

The officials who are preparing background papers for the conference expect that Kennedy will invite Diefenbaker to join the U.S. in backing an imaginative new kind of foreign-aid effort, one that would require us to reverse the approach we’ve used since the war.

While aid given by Canada compares favorably with totals from other Western countries, we have in the past insisted that recipient nations spend nearly all their aid money on Canadian goods, Canadian

machines and Canadian technical skills. Our contribution to the Colombo Plan, for example, is little more than a subsidized export program that enables Canadian firms to win contracts at much higher prices than the recipient countries would pay on the open, international market, plus a giveaway of surplus grains.

What Kennedy advocates instead is aid based on a system of lowor no-interest long-term loans that would not have to be spent in the donor countries. This would allow recipient nations to integrate the funds into their economies, instead of having to depend on short-term gifts of industrial and commodity surpluses.

Kennedy would also like to see Canada raise the total of its foreign-aid commitments to the annual equivalent of one percent of our gross national product—relatively the same level as current American contributions.

This would mean a Canadian outlay of about $350 million a year—nearly six times our present effort.

The American president is expected as welj to urge Canadian participation in what he has called “the majestic concept of Operation Pan-America”— his $600 million plan to combat illiteracy, disease and poverty in Central and South America. He’ll probably renew with vigor the American position that Canada should belong to the Organization of American States, pointing out the advantages of closer alliance with the Latin countries at a time when they’re grouping themselves into free-trade areas. Canada’s aid to Latin America has so far been limited to three experts who are helping to reorganize Bolivian tin mines that have got loans from the Inter-American Bank.

In his reply to Kennedy’s request for a greater Canadian foreign-aid effort, Diefenbaker can point to some substantial achievements of his administration. Shortly after the Conservatives assumed office, even though they made no promises about foreign aid in their election campaigns, they increased Canada’s contribution to the Colombo Plan from $35 million to $50 million a year. Canada was the first country to announce a cash contribution ($10.5 million over three years) to an African Colombo Plan. The government also initiated a five-year $11 million aid plan to the West Indies, and has increased its grants to the many aid agencies of the United Nations. Not including contributions to the World Bank, the International Monetary Fund and the new International Development Association, Canadian economic aid is now running at about $63 million a year—significantly higher than at any time under the Liberals.

The government also has greatly improved the efficiency of this country’s aid effort by concentrating its many pieces, formerly scattered among the departments of trade and commerce, finance and external affairs, into a central Foreign Aid Office under the direction of H. O. Moran, one of the brightest people in the Canadian foreign service. Moran is a career diplomat who has served as our ambassador to Turkey and high commissioner to Pakistan.

And yet they’re reticent

Despite these and other constructive moves. Conservative politicians seldom mention Canadian foreign aid, except to point out, as the prime minister did in a Montreal speech last month, that “practically the whole amount which Canada is currently contributing to the Colombo Plan is paid out to Canadian firms and individuals and represents a. substantial amount of business.”

Under our Colombo Plan aid we’ve been accepting requests only for those projects for which Canada can provide nearly all the goods and services that can’t be supplied in the recipient country. Aside from the ships themselves, the engines for the vessels we’re giving to the West Indies, for instance, could have

been bought for more than 10 percent less in Britain, but only Canadian tenders were considered. The government is kept under constant pressure not to make any aid purchases outside the country. When a contract for only $7,500 worth of electrical equipment was awarded to a British firm recently, the Canadian Electrical Association sent letters of protest to every important member of cabinet, including the prime minister. “The more quickly the less developed countries can become self-supporting, active participants in a greatly expanded world trading community,” Diefenbaker said recently, “the greater will be the opportunities for Canadian exports.”

The sharpest criticism of this commercial attitude to foreign aid has come from Mitchell Sharp, vicepresident of Brazilian Traction, Light & Power Co. and a former deputy minister of trade and commerce, who told the third annual conference of the Canadian National Commission for UNESCO in Toronto: “There is one good and sufficient reason for international aid—that there are less fortunate people in the world who need our help. If they’re grateful for our help, so much the better, and if by reason of the aid they become bigger customers for Canadian goods and services, better still. But the inspiration for what we must do must be essentially humanitarian and unselfish.”

With the government out, others come in

Because of the government’s failure to participate significantly in educational aid, Canadian universities and many private citizens are increasingly moving into the field. A survey by The Financial Post showed 2,300 non-white students currently enrolled at Canadian universities—with government funds contributing to the education of only one in eight.

The most highly organized national campaign to introduce more foreign undergraduates into Canada is the African Students Foundátion, which is currently trying to raise $250,000 to carry on its work of bringing over young Africans. A few universities have agreed to grant them scholarships; students at the Ryerson Institute of Technology in Toronto recently voted to increase their own fees so that they might adopt some of the Africans.

At the same time groups like the Canadian Overseas Volunteers, organized at the University of Toronto by Fred Stinson, the Conservative MP for York Centre, are preparing to send young Canadian graduates to help at the village level in underdeveloped areas. Stinson, who toured Asia last year, is convinced that the government should enter this field in a massive way. He’s having films made of what this year’s first group of ten volunteers will accomplish and plans to show them personally to Howard Green, secretary of state for external affairs. So far the government has given him verbal encouragement and no money.

The Kennedy-Diefenbaker discussions will undoubtedly touch this area where government policy in Canada seems to be trailing public opinion, but it’s doubtful if either leader can put the case more strongly than Lewis Perinbam, the brilliant young Malayanborn associate secretary of the Canadian National Commission for UNESCO, who said recently: “In spite of its massive aid programs, the West still faces the grave danger of being isolated from and so threatened by the two-thirds of humanity living in conditions of poverty and despair. We like to regard North America as the heart of the free world, but to many of the world’s impoverished peoples it seems less the free world than just the rich world. Unless the West sees this human revolution as its own creation and is willing to become involved in that revolution, it is ignoring at its peril the real challenge of the second half of the twentieth century.” ★ 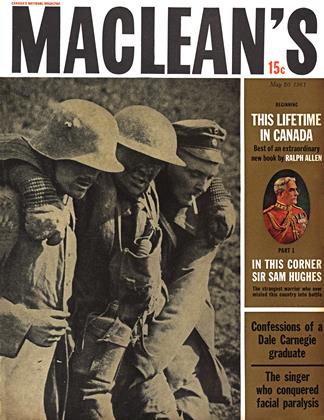