Who'll pay the record shot for our next election? Peter C. Newman May 6 1961

No process in the working of Canadian democracy is surrounded by a climate of greater mystery than the collection of campaign funds by political parties. The innuendo of scandal is so strong that the details of party finances can seldom be traced beyond the whispered exaggerations of Ottawa gossip.

It’s a particularly lively topic, in the capital at the moment, because all parties have suddenly intensified their efforts to collect funds for the next general election. While exact dollar objectives remain secret, it’s easy to believe that the coming election will be the most expensive in Canadian political history.

The consensus in Ottawa is that the campaign will cost at least eleven million dollars—that’s about three million dollars more than the estimate made for the 1958 election.

The main reason for the expected jump in campaigning costs is that, for the first time, a national commercial television hookup will be available for purchase by the candidates; in the past elections the only national TV outlet was the time allotted free by the CBC. Commenting on the need for campaign funds in this television age, Senator J. J. Connolly, the president of the National Liberal Federation, told me: “It’s not a matter of addition: it’s a matter of multiplication.”

Along with Senator Connolly, who was once a philosophy professor at the University of Notre Dame, the most important fund-raisers in the Liberal party are Maj.-Gen. Bruce Matthews, the Toronto investor who preceded the senator as head of the Liberal Federation; Walter Gordon, of Royal Commission fame, and Duncan MacTavish, the well-known Ottawa lawyer.

The Conservatives have set a precedent by appointing to the cabinet a man believed to be specifically charged with party financial matters.

He is George Ernest Halpenny, the 57-year-old manufacturing chemist from London, Ont., who presided over the Commons broadcasting committee during its stormy hearings over the cancellation of the CBC’s Preview Commentary program. He became a minister without portfolio last October. Possibly an even more influential man in party finances is Senator Bill Brunt, from Hanover, Ont., one of the prime minister’s closest friends.

The CCF, for the first time in its history, also may be moving into the big-money league. In the 1949 election, the party ran 179 candidates (and elected 13) for a total expenditure of only a quarter of a mil-

lion dollars. Its marriage with the Canadian Labor Congress could bring the party as much as a million dollars a year. This would come mostly from the 60 cents that will be collected annually from each CLC member whose union decides to affiliate with the New Party. It’s hoped that the unionists who decide to “contract out” of this arrangement will be more than made up for by the annual $2.50 charged for individual New Party memberships. The situation is complicated by the law recently passed in B. C. that prohibits the use of the checkoff for political activity. The CLC is now preparing either to test the legislation or to find another way of collecting party dues.

The Liberals and Conservatives expect to raise at least half their funds in Toronto and Montreal, using three very different approaches.

The biggest donors, as in past elections, are expected to be the large corporations, indulging in what they call “necessary” giving. These are contributions made without any expectation of specific returns, beyond the preservation of free enterprise and the two-party system. The donation is almost always split sixtyforty, with the party in power getting the bigger share.

This year, the canvassers will hold out the extra inducement to their business contacts of selling protection against the rising bogy of the socialist-labor party. It may have been partly the availability of party funds that John Diefenbaker had in mind when, at the March meeting of the Progressive Conservative Association, he unexpectedly declared that the main issue of the next election would be a fight between socialism and free enterprise. He represented his party as the only true defender of the capitalist system.

Corporate donations are supplemented by “the personal touch”—diligent, discreet but intense solicitation among rich individuals by party collectors. It is in this area that the Conservatives have lost their greatest support. When Diefenbaker discarded the Old Guard Tory element of his party, he also jettisoned the financial support of a majority of this country’s non-Liberal businessmen. The real Tories are so touchy about Diefenbaker that one prominent westerner, who in the past contributed $25,000 a year to the PC election fund, phoned Ottawa in a rage recently cancelling his undertaking. He had been infuriated by the PM’s stand against South African apartheid.

The most willing contributors to party treasuries

are some of the contractors who deal in government work. They usually make the gift to the party in power fairly openly, but quietly also take out some insurance by making a smaller donation to the opposition. Actually there isn’t much that the contractors can get back as a reward, because most government contracts are handed out by open tendering. But there are exceptions, as both major parties have been able to discover, especially in some major projects, where it is difficult to estimate in advance exactly what a contract will involve, and jobs are let on a cost-plus basis. This also applies to work for the Defense Production Department, which is secret enough that details cannot be published in tender form. Most government departments also maintain lists of favored contractors for awarding small, local jobs.

The fund-raising organization of the Conservatives is decentralized, with many prominent provincial collectors. They include Leon Ladner, a Vancouver lawyer, and Senator L. P. Beaubien, a Montreal stockbroker.

While the national and provincial headquarters of both parties provide the funds for national advertising and promotion, they can seldom provide more than half the money needed to pay for local constituency campaigns.

Candidates must bolster the funds advanced by their central offices with local collections, plus their own money. Ottawa politicians estimate that the campaign in a rural constituency now costs a minimum of $10,000; city ridings go from $15,000 upward. Campaigns in Quebec are invariably more expensive.

Money alone is seldom decisive. “Too lavish spending can ruin you,” says one of Ottawa’s best political strategists. “In the average constituency, anything spent over $15,000 begins to work against you.” It’s significant that the 1953 election, when George Drew managed to win only 51 seats, cost the Conservative party almost twice as much as the victory of 1957, when it won 112. In the latter year the Liberals spent considerably more than the Conservatives.

Candidates must file their election expenses under provision 63 of the Canada Election Act, but the figures are not audited and include no check on the spending by national party headquarters. The campaign funds that are declared are usually just a formality, with representative amounts entered under the appropriate headings. The highest declared expenditure in the 1958 election was the $32,924 reported by Reginald Dawson, the Conservative defeated in Mount Royal. J. S. Woodsworth, the CCF leader, once estimated that it cost him $600 to get elected for Winnipeg North Centre in 1930.

There has been mounting criticism in parliament of the current method of financing elections. The CCF has moved a bill demanding full financial disclosures, and Jack Pickersgill of the Liberals has suggested that television time on the private stations should be rationed out to candidates, with the federal treasury paying the bill, so that “Canadian democracy does not give way to the rule of the wealthy.”

Most infuriating to the Liberals and Conservatives is that the New Party has managed to make its own political contributions tax deductible. Under section 11(10) (D) of the Income Tax Act, union dues are exempt, including that portion transferred to the New Party for political purposes. There is growing feeling in Ottawa that this exemption should be extended to the other parties, giving political contribution the status of gifts to charity.

Meanwhile, the present system mysteriously continues to produce millions of dollars for the party war chests. Probably the most forthright clue came from R. O. Sweezey, the president of the Beauharnois Power Corporation, who in the late 1920s contributed about $700,000 to the Liberal party, after his company had secured hydro rights on the St. Lawrence. The contribution had been necessary, he said, because “gratefulness was always regarded as an important factor in dealing with democratic governments.” 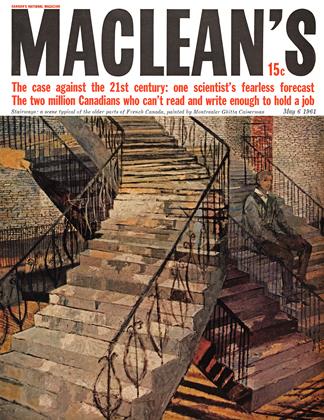