The outward show of warmth, cordiality, harmony, admiration and trust between Canada and the United States, prompted by President John F. Kennedy’s visit to Ottawa, brushed offstage and out of sight something that might otherwise have caused Washington to fire a sharp barrage of criticism north across the border. As it turned out. U. S. policy-makers, flushed with anger but unwilling to inject a sour note into the friendly festivities at Canada's capital, had to content themselves with muttering in private.

What stirred their tempers was a brief interview that Canada’s mild-mannered external affairs minister. Howard C. Green, gave at Geneva to an Associated Press correspondent. Green was quoted as saying that Canada will be ready to mediate the U. S.-Cuban feud when the dust settles and that “we would hope to be able to solve this problem."

To a Canadian, this sounds harmless enough; a simple statement that if Canada can help bring about a reconciliation of two brawling neighbors, Canada will be willing to try. But that wasn’t how U. S. policy-makers read it. As they read it, Green was tel 1 in" the world that the U. S. line vis-à-vis Cuba is based on exaggerations, distortions and unwarranted fears, and not worth taking seriously. This line is that there is no

At the moment Green was being interviewed. the U. S. Department of State was striving desperately to muster the support of nineteen Latin American republics in a campaign against Castro. Although Congress had whipped through a whopping Latin American aid bill, and the U. S. had half a billion dollars to dangle enticingly in front of the Latinos, the response to the State Department’s overtures had ranged from lukewarm to frostily hostile. So there was already tension in Washington, and disappointment, and frayed nerves, and then the How'ard Green interview hit the newspapers.

“What’s he trying to do, scuttle us?” one U. S. official demanded. Another predicted that Green's comments would impair U. S. prospects of persuading the Organization of American States to censure Castro. But. since those prospects were negligible, it seems unlikely that much harm was done, and it even seems possible that the words attributed to Green may have splashed cold water on some of the hotheads advocating a return to gunboat diplomacy. * 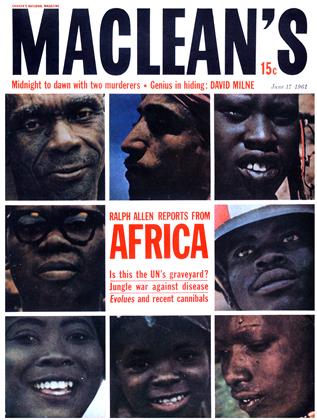