MAILBAG: Some more churchmen stand up to be counted/Tragedy of a doomed child

It did my heart good to read Grace Lane's Hidden victory of our churches (For the sake of argument, June 3). It must have taken some courage to stand up and be counted, especially since it has become rather fashionable to blame religion for everything that is wrong in this world.—J. RFMPI I , TORONTO.

I am deeply grateful to Grace Lane

^ l am proud to be a member of a church that has within its ranks people of the calibre of Mrs. Lane. Grace Lane is not only a credit to her church but now, sir, to your paper. 1 am grateful for this article and the one to which Grace Lane makes reference ( The hidden failure of our churches, by Ralph Allen. Leb. 25). Both generated some thinking and soul SEARCHING.-THE RFV.

*" Ralph Allen's article did nothing but leave a very bad taste in my mouth for the many undeserved criticisms which Mrs. Lane has now so ably refuted.— J. F. MAILING. IORONTO.

* Mrs. Lane’s article is quite typical of one who is the wife of the present-day minister, doing what they can for everybody. taking part in all activities outside the church—especially those which conclude with a sumptuous repast. But the church was ordained to do much more than that, and that is why it has failed—-simply because Christ is left out of its program and young men. sensing the security of the cloth with its good salary and all the fringe benefits and the added free handouts, are preaching about a Saviour who in some cases they themselves have never accepted and to a congregation who hear what pleases them most. . . . Comparing the majority of churches of today with Bible

teaching one could say: they are simply going through the motions . . .-.IAS. MASON, PIC JOU, N.S.

^ Grace l ane omitted, in her mention of agnostics, hedonists, etc., a milder form of unbeliever. This is the person who says "I never go to church but I'm a better Christian than many who go.” These people confuse the word “Christian” with the word “good.” The two words are not synonymous. A Christian is one who follows the teachings of Christ. You cannot follow these teachings unless you go to church and find out what they are. . . . And I hope I’ve stepped on a few TOES,-MRS. WI NDY

Your profile (Entertainment, June 3) of the chairman of the Ontario Board of Censors of Motion Pictures is frightening, That a man so obviously un-

qualified decides which films may be seen by adults is ludicrous and calls for a revision of the whole system of motion picture CENSORSHIP.-DAVID THOMAS,

Congratulations for again giving prominence to the work being done in Canada for mentally retarded children. The personal emphasis given by Mrs. Sonya

Bixel’s story (The gift of a doomed child, June 3) will surely underline for many readers, who might otherwise skim past it, the unique importance of the London Research Institute. . . . Please keep it up. and help to bring about the day toward which all our efforts are directed: when the cost and responsibility of educating and caring for the mentally retarded is taken up by those who should rightfully bear it: the provincial GOVERNMENTS.-ANN V.

^ Sonya Bixel was indeed fortunate— not for the reasons she mentions, but I) because she looked after Karen for such a short time (less than two years), and 2) because she had the assistance of her mother and others in looking after Karen. Hundreds of mothers of retarded children have no help whatever, except their husbands. In other provinces there may be a wait of 3, 4, ot even 5 years before retarded children can be accepted in institutions. In B. C. last year there were over 600 on the waiting list at Woodlands School, the only such institution in the province. Mrs. Bixel had only begun to realize the difficulties and heartbreak facing parents of retarded children when Karen was taken from her. Although facing and coping with these problems for an extended period of time no doubt develops such qualities as patience and perseverence. a retarded child can hardly be termed a "blessing in disguise.” It is a tragedy to all concerned.

For obvious reasons, Maclean's here breaks its rale about withholding the names of letter writers.

Customs of the border guards

W. O. Mitchell’s experience with his banana plants and inspection officials is not exceptional. One of their fancy

tricks is to open for inspection, allow ail the enclosed moisture in the packing to get nicely dried out. then rewrap the

parcel without adding any more moisture and send it on its way today or next week. A valuable shipment to me from Saskatoon, “via Estevan for inspection,” reached me five weeks after shipment—all dead, of course. Another time, I asked Plant Protection. Ottawa, for a permit to import a new gooseberry from Minnesota. They replied that it could not be sent till I "advised whether I wanted the gooseberry for fruit bearing or for ornamental purposes.” The delay meant I couldn’t import the gooseberry till the next year. -A. B. SMITH, CRANBROOK. B.C.

Your June 3 editorial (Anti-Communist manifesto: Four ways not to fight the Reds) is both excellent and timely. A reasonable and intelligent exposition of communism in both our schools and newspapers is the only way in which we can keep communism in the correct perspective.-RICHARD RYAN, MONTREAL.

^ Our enemy is not communism, an abstract idea, but Russian Imperialism under cover of an international idea of COMMUNISM.-Y. ONYSCHUCK, TORONTO.

I am following with great interest the accurate and unexpurgated life of Sir Sam Hughes by Ralph Allen (This lifetime in Canada, Parts 1 and 2, May 20 and June 3). I had the privilege of serving with the CEF from August 1914 till 1919 and I remember only too well the month of September, which I spent at Valcartier as a sapper in the 2nd Field Company of Toronto. Gen. Hughes managed to insult one of our junior officers in front of his own men while we were parading in a careless way while suffering a hangover from our second shot of anti-typhoid serum. Our well-bred commanding officer, Capt. “Tommy” Irving, raised the roof a day later at Army Headquarters about it. . . . At Valcartier our company was built up to a strength of about 240, which included our mounted section of about 50 drivers. These drivers soon developed a great interest in the light draught horses, wffiich included a few teams of sturdy fast-stepping chestnuts ... a gift from the Toronto Fire Department, courtesy of Mayor Tommy Church. They were the finest draught horses 1 have ever seen. During the embarkation at Quebec, thanks to Gen. Hughes, our mounted men were taken from their horses and these animals were shipped on a fairly small freighter on which their guardians suffered so from seasickness that the starved and neglected animals in their stalls bit deeply into each other’s necks. We heard that many of our horses died on the transport and we never saw the Toronto fire horses again. . . . Gen. Hughes did us one good turn in November 1914 when he refused to feed the men of the CEF into the British Army as local reinforcements and thus kill all Canadian recruiting . . . — A. C. OXLEY,

s 1 recall an incident before the Boer War when I was a small boy. It was at Barriefield Camp after a church parade. Sam Hughes was mounted and leading his infantry regiment up the hot dusty road to the higher ground. The men were tired and lagged behind the regiment in front. Sam stood up in his stirrups, turned around, waved them on with a flow of language that I never heard before or since. I think now' that that is where the foundation was laid for my own cussing vocabulary. Please do not consider this derogatory to Sir Sam as he was a good friend of my father, the late Major John G. Hagerman of the 3rd Prince of Wales Canadian Dragoons. - FRED G. HAGERMAN. LOS

lt;s 1 crossed to France with C Company 20th Battalion CEF in 1915. We used to sing when we were marching to the P & O trenches from La Clytte in Belgium. during the winter of 1915-16:

We are Sam Hughes’s pets

We cannot shoot, we cannot fight

What gohiarned use are we?

And when we get to Germany,

What will the Kaiser say?

The tune was that of The Church’s One Foundation. — B. ASQUITH, PORT CARLING, ONT.

lt;s 1 was at Valcartier w'hen the first contingent was reviewed by the Duke of Connaught and remember that, when the first troops neared the saluting base, Sir Sam, who had been some yards to the rear of the Duke, edged his horse forward until he was on a level with the Governor - General. My memory, although after nearly 47 years it may

be faulty, tells me that Sir Sam later put himself at the head of the parade. —

The record in Quebec

I have been the Member of the Quebec Legislative Assembly for Chicoutimi since 1938; I am at the present leader of the Opposition in the Legislative Assembly of Quebec and also the National Union Party leader. In Maclean’s of April 22, you published an article entitled French Revolution, Quebec 1961, signed by Peter C. Newman. I refer you to the following excerpt which appears on page 84:

"Probably the most astonishing aspect of his narrow victory over the powerful Union Nationale was that Lesage managed to beat the ballot-stuffing tactics of his opponents. The official report of the voting shows that the UN won eleven of the twelve polls in which there were more valid ballots than eligible voters. The summary issued by Quebec’s Chief Electoral Officer calmly lists such oddities as polling station 1 14 in Chicoutimi, where 162 eligible electors are shown, but 224 ‘valid’ ballots were counted.”

In writing this, your editor appears to have obtained this information from the report on the general election of 1960 published by the Queen's Printer. Quebec 1960. Your article caused me to inquire into the so-called illegality which you denounced. Here are the results of this inquiry:

In this polling-subdivision I obtained 120 votes, my opponent. Mr. Rosaire Gauthier, obtained 104; two votes were declared void, making a total of 226 and leaving 19 persons who did not vote. Consequently, it was by error that the report on the General Election mentioned 162 registered electors, whereas the correct number was 245. I have the official electoral list on hand which proves the facts I advance. — ANTONIO 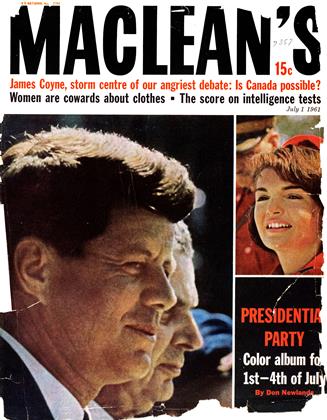