on the night train to Lisbon Bruce Hutchison July 15 1961

My ESCAPE from Portugal was a desperate affair. The newspapers don't report such things, of course, because they are part of the world-wide conspiracy to lure innocent citizens out of Canada. But I resolved, if I got through this ordeal alive, to expose the nightmare of foreign travel to my countrymen before another season of holiday madness had passed.

I made that resolution as the train from Madrid approached the Portuguese border, toward midnight. A sharp knock on the door of my compartment had warned me that the jig was up.

I he passport officer looked harmless enough a handsome, smiling young man with ga\ Latin manner. He didn't deceive me for a moment when I noticed two stolid soldiers in the corridor and. behind them, a pair of suave characters pretending to look out the window. I recognized them immediately as the secret police of Franco or Salazar. The long chase across Europe was closing in for the kill.

Frankly, 1 was terrified, but I was used to that, i had been terrified for months, like all travelers who come home to boast of their conquests though in fact they have been through hell. Nevertheless, I put on a bold front. If I could never hope to see my country again at least l would not dis-

honor it. Perhaps terror had made me a little light-headed but in the clatter of that swaying train I seemed to hear a familiar Canadian chorus and its words sprang involuntarily from my lips. To the passport officer I said stiffly: "We stand on guard for thee.”

He ignored that sentiment and addressed me in what 1 took to be Spanish or Portuguese. 1 replied in Fnglish and finally we compromised on French, which neither of us understood.

In literal Fnglish translation our dialogue must have been interesting as I look back on it.

I KEPT MY ARCTIC CHILL

How.” I asked, “is it that you are carrying yourself this evening, dear sir, if possible?"

With a bright, cynical grin the officer replied: "It is formidable."

I kept cool. too. in a sudden frigid clarity, a native Arctic chill that descends on any Canadian in moments of crisis. It is the nature of our northern breed.

So 1 demanded, point-blank: "At which hour. I desire to comprehend, does the government Portuguese declare itself, for example?”

He gave me a puzzled glance as one might observe a peculiarly violent lunatic. I suppose he had never seen

a normal Canadian before. "Ah.” said he in French no better than mine, "it is formidable.”

"One owes it,” I insisted, “to speak the true. Regard, then, a man of honor, exquisite and vertical like this and that.”

1 intended to state that I was a respectable tourist who felt a warm affection for the less privileged nations but as the w'ords came out I found myself saying that I loved hot lemon with my tea. very. I've always contended that our Canadian high schools don’t teach French right.

That wily devil winked at the soldiers and remarked briskly: "It is formidable.” Then, summoning up his last fragments of French, he inquired why 1 was frying oysters on the top of the train. Or so I understood him. It sounded crazy, even in Portugal, but I realized that he was trying to trap me. You can never trust these devious F'uropeans.

To show' him that a Canadian citizen would stand no nonsense. I said with dignity: "1 am an editor, of a verity. One is writing for journals numerous and impotent.”

“Ha!” he exclaimed and a steely glint came into his eyes. "A writer of journalisms. It is indeed formidable.”

1 saw that I had made a fatal mistake when he added: "The things will arrange themselves indubitably. But yes. the passports, of the soonest."

"But no. absolute.” 1 said, for I had seen too much of foreign travel to surrender my passport lightly. I had carried it for weeks fastened with two safety pins in my inside coat pocket against my heart and kept my hand so closely pressed against it for fear of pickpockets that my arm was permanently numbed.

Most of Europe had seen me in that posture, looking like those portraits of Napoleon on the eve of Waterloo. As I always kept the other hand deep in my trousers pocket, gripping my money, strangers generally took me for the victim of some hideous paralytic disease. People stared a good deal and tourist guides treated me with special sympathy. I didn't care. I had my passport, limp and moist but still legible.

Now 1 grasped it tightly in my pocket and informed the officer that "the government Canadian defends its citizens loyal with a fury delicious altogether.”

I didn’t believe that, naturally, but I thought the bluff' worth trying. And in a sudden inspiration 1 warned him solemnly that "if this affair succeeds itself I have fear of the war atomic. Then pouf! The thing is pregnant.”

The threat didn’t seem to impress that stubborn official. He only grinned and repeated that it was formidable. These slap-happy Latins care nothing for human life. In the end I surrendered my passport and fell into a fitful sleep and everything turned out exactly as 1 had expected.

The train stopped at a lonely mountain station. Those secret agents dragged me from my bed. blindfolded me and sealed my mouth with adhesive tape. After a ride in a jolting car I found myself in a dimly lit farmhouse. 1 had seen it frequently in the movies.

An aged crone sat by a guttering fire, some cut-throat fellows lurked in the shadows, and a luscious young woman, tightly sheathed in black silk, embraced me fondly. The work of counter-espionage is the same the world over. But they wouldn't get any of Canada's strategic secrets out of me.

The first agent-—he was fat and oily and wore a cruel leer under his pointed mustache — asked me in English why 1 was spying on Portugal.

In French I answered: "It is formidable.”

"Just come clean.” said the second agent, a tiny man of rodent face. "If not. . . .” He rubbed his hands together. making the knuckles crack unpleasantly.

"It is formidable.” I whispered in a hoarse voice.

"Wise guy. huh?" the fat one snarled. "We’ll give you one more chance. What’s the gross national product of Canada in constant dollars?”

"Where does Fleming hide his revenue surplus?”

"When will Tommy Douglas start the revolution?”

"Will Jim Coyne be your next dictator?"

The questions were fired at me like bullets. I kept my head and murmured that the thing was formidable.

"All right." the rodent growled, "we'll give him the treatment. Fire or water?”

"Start with fire.” the other grunted. "Not necessarily water but water if necessary, eh?" I could see from his sneer that he had been reading Jack Pickersgill’s life of Mackenzie King. These secret agents know everything.

They pushed the girl roughly from around my neck and hurled her to the floor. The crone lifted a red-hot iron.. . .

This is not literally what happened but it might have. I just mention the facts here, without exaggeration, as a warning to foreign travelers.

Actually, when I awakened on the train next morning we were rolling into Lisbon. The government official handed me back my passport and shook my hand warmly. 1 saw' through his deception but thought it best to humor him to the end.

"It is necessary." 1 said, "to declare eternal love to the government Portuguese. sweet and elongated.”

"It is formidable." he agreed and we parted.

I found a taxi and drove to the American Express office to cash a cheque. There, as I had anticipated, the two secret agents lounged at the counter with a studied air of carelessness.

The fat one was telling the clerk that he practised as a mortician in Seattle. The rodent claimed to be a manufacturer of ball bearings in Pittsburgh. They grew quite friendly and offered to buy me a drink on the boulevard. I escaped their obvious ambush by darting down an alley, and took the next plane to Montreal. ★ 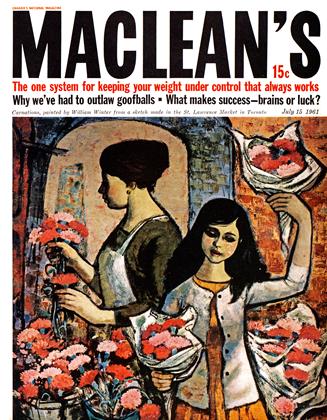