ON THE SHUTTLECOCK FRONT: no schragfahnen ROYD BEAMISH July 29 1961

Only two feathers from each wing of a goose are suitable for making badminton shuttlecocks. They’re called schragfahnen and their barbs are balanced evenly on both sides of the quill. Canadian shuttlecock manufacturers need 20,000,000 schragfahnen this year, but this will go down as the year when the schragfahnen crisis struck.

"It's been getting harder every year to round up our annual supply,” L. A. Moore, the vice-president of the Campbell Manufacturing Company of Toronto. says. "But this year, for some reason or other, the supply just seems to have dried up.” Moore has his own men. and Canada’s trade commissioners as well, searching the world for people who have goosefeathers they want to sell.

In previous years, countries in the Soviet bloc were reliable suppliers of goosefeathers but they seem to have decided that shuttlecocks have some strategic importance. "Russia has millions of schragfahnen,” Moore says, "but they won’t sell them to the West and the other Communist countries are following Russia’s lead.”

One big trouble is the state trading agency through which all business deals in a Communist country must be made. "Sometimes they tell us they have so many hundred kilos available," Moore says. "But instead of quoting a price they ask us how much we're prepared to pay. We name a price and then they tell us they really have a much smaller amount on hand—sometimes as little as 10 percent of their original figure.”

In the non-Communist countries and Asia, Moore thinks the schragfahnen shortage has been caused by the black market. "When people kill geese for the black market.” he says, “they don’t leave feathers lying around as evidence.”

Campbell's now have only a quarter of the schragfahnen they need — most of them purchased from Yugoslavia— and they are using a third, slightly lopsided, feather from the goose’s wing and trimming one side to make it symmetrical. The company’s biggest hope is a Canadian trade commissioner who claims to have located a promising new supply of goose feathers. But Moore won’t say where the supplier is. Other shuttlecock men. caught short of schragfahnen, might get there first. 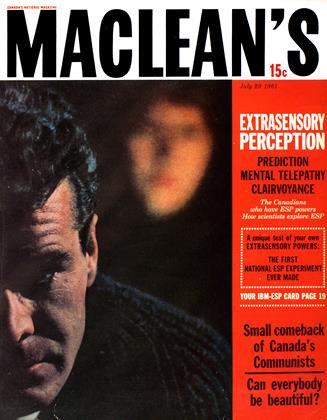