The hay fever season begins in some parts of Canada for some people in February, when the first flowers appear on some trees, and lasts until October when the leaves fall. But for most of the 200.000 Canadians afflicted with a sensitivity to certain kinds of pollen, the hay fever season begins in midAugust and endures until the middle of September. Here is a summary of what hay fever is. what causes it and what can be done about it:

^ Hay fever is caused by what doctors call "toxic pollens.” They affect the membranes of the victim's eyes, nose and throat. No one knows why some people are affected by some types of pollen and others are not. The only sure medical test for allergy is to stand the patient in a hay fever area and see if he sneezes.

*" The toxic pollens are wind-borne and come from Russian thistles, summer cypresses, wormwood, pigweed and plantain plants; kentucky blue, timothy and orchard grasses and from flowers of alder, poplar, oak. ash. birch, beech, elm and maple trees. But the grand champion toxic pollen producer is ragweed—-of which there are three varieties ranging in size from five inches to nine feet and against which there is no defense. Fifteen years ago. health authorities tried to make New York City pollen-free by burning all the ragweed between the Hudson River anil the Atlantic Ocean. But three years later the pollen was back. It just blew across the Hudson from New' Jersey.

^ Most pollen allergies are inherited and incurable, although children have a better chance of outgrowing sensitivity to pollen than adults who become susceptible in their early twenties. About 50 percent of hay fever sufferers can find relief by taking one of the 12 varieties of antihistamine (there are about 100 varieties on the market) considcred by doctors to be effective. Another 40 percent can be helped by an annual series of from 10 to 12 shots of a pollen serum designed to provide immunization in much the same way as polio and smallpox vaccines. Some doctors recommend cortisone shots but this treatment is often uncertain and expensive — up to $250 a season. Sixty hospitals and allergy clinics are working on a one-shot immunization program, but the process is still experimental. The remaining 10 percent can't be helped by anything. Their only hope is to outrun the ragweed and take refuge in one of the pollen-free areas indicated on Maclean's map. — SHIRLEY MAIR 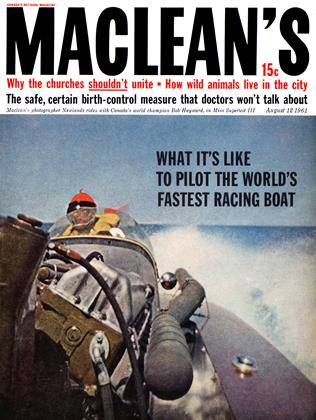