"We find ourselves an island in enemy territory. so we live each day as it comes" Leslie F. Hannon August 26 1961

Yes, there is a new Mike Pearson; now he wants to be prime minister

Every other Tuesday at 11 o'clock in the morning, a secret meeting of twelve men quietly gathers in room 409S of the parliament buildings in Ottawa to plot the overthrow of the Diefenbaker regime.

None of these schemers wear black fedoras or travel under code names, but they’re just as determined to alter the government of their country as any bunch of banana republic conspirators. What they’re plotting is not a bloody coup d’etat, but a ballot-box revolution that would make Lester Pearson the prime minister of Canada.

The immediate objective of the conspiratorial dozen is to cook up a Liberal strategy for the general election — something which, incredibly enough, the party didn’t have until this committee was established three months ago.

Although the full details of that strategy remain a party secret, its basic architecture is gradually becoming known and discussed in Ottawa's upper political circles. The main Liberal rallying cry will be. “Make Canada again the envy of the world” — a status which the Liberals feel has sadly diminished under Conservative rule.

Pearson has overruled the Old Guard

The New Party will be totally ignored in the Liberal campaign, except for an occasional reference to “the socialists." In an attempt to place the Diefenbaker government on the defensive, the Liberals plan to revive the hoary accusation that the Tory party is dominated by Bay Street. They’ll be concentrating personal attacks on the Toronto cabinet ministers — George Hees, Donald Fleming and Dave Walker — as examples of the government's Toryism.

Probably Pearson’s main accomplishment at the strategy sessions has been the decisive way in which he has overruled the party’s Old Guard who wanted to base the election campaign on a posthumous glorification of life in Canada during the twenty-two years of Liberal rule. They have been swept aside; the past record of the Liberals in power will hardly be men-

tioned. “It took us a long time,” says one leading Ottawa Liberal, “but we’ve finally realized that in the next election we’ll be campaigning on our promises, not on our record.”

The party is currently financing its own national public opinion polls to discover what issues concern the greatest number of Canadians. Much of the Liberal platform will come out of the resolutions adopted by the party rally held last January. I he main planks are a national health scheme, a federal system of university scholarships, establishment of a loan fund for municipal improvements, more effective unemployment cures and welfare measures.

The pivotal point of Liberal electoral strategy is the new image planned for the party leader. All placards will refer to him only as “MIKE” and attempts will be made to portray him as a very different politician from the man who led the party to its most humiliating defeat in the 1958 campaign.

Is Pearson really different? Or is an improvement in his political instincts strictly the product of his image-makers? If Pearson has changed, it is in the way he views his job. When he first took over the Liberal leadership, he seemed to regard as his main function the scrutiny of government legislation, so that the Conservatives would constantly have to defend and justify their legislative behavior. After three years of playing this watchdog role, he has become convinced that it’s really not very effective. Under our parliamentary system, the opposition rarely succeeds in changing the legislative mind of the government. That was true when the Liberals were in power, and it’s true now. Pearson has therefore adopted a new philosophy. He now sees the purpose of the opposition as a focus for the discontent of the electorate. That is, he views his job not as criticizing government policies, but as being the instrument through whom the people can throw out the party in power. This change of attitude is more revolutionary than it sounds, because, in the process, Pearson has become interested in political organization — a field that in the past he openly considered boring.

As part of his revitalization of the party machine. Pearson has brought in. as executive director of the National Liberal Federation. Keith Davey, a 35-yearold former Toronto radio station sales manager. He has also appointed to his personal staff 33-year-old Dick O’Hagan, a former newspaperman and advertising executive. They're a couple of bright-eyed, bushy-tailed organizers who believe that Pearson and his policies must be sold to the country, and sold hard. If enthusiasm alone could win elections, Davey and O’Hagan would push the Liberals back into power.

In the few weeks Davey has held his job. he’s reawakened much of the party’s dormant machinery. Provinces have been assigned the number of MPs they’re to deliver in the next federal campaign, and organizational follow-ups are now in the process of being worked out. These are the targets: Newfoundland, 5; P.E.I., 3; Nova Scotia. 3; New Brunswick, 5; Quebec. 65; Ontario. 45; Manitoba, 4; Saskatchewan, 8: Alberta, 2; B. C.. 3.

The change in Pearson goes deeper than his newly acquired interest in political organization. Unlike most leaders of the opposition, he already had a place assured in Canadian and world history when he assumed that office. He lacked the zest for power that an effective opposition leader must have. There was about him an air of reserve, a feeling that he should not be drawn into situations where his prestige would be risked in routine encounters. He confessed to one close friend that he just couldn't walk up to strangers and pump their hands without being afraid of either invading their privacy or compromising his own dignity.

He still hasn't kissed any babies, but much of his stiffness has disappeared. He’s no longer self-conscious about being a politician. At a Liberal hotel banquet in Brantford, Ont., recently, Pearson deliberately left

the assembled faithful, walked into the kitchen and shook hands with the cook and all his staff. In the first six months of this year, his speech-making tours totaled 23,437 miles.

Pearson’s closest friends say his changed attitude to politics is due simply to this fact; at long last he very much wants to become prime minister. They insist that he’s not interested in power for its own sake, but that he does wish to have the powers of the office to transform his ideas into action. His drive for power is doubly strong because most of these ideas are in the field of Canada’s external affairs where he remains emotionally committed. Pearson would like to make Canada the leader in the United Nations against the Russian attack on the secretarygeneral’s office: he wants Canada to lead in the formation of a north Atlantic free trade area; and he believes we’re not fulfilling our responsibilities toward Latin America. Although his public pronouncements on international affairs seldom criticize the current external affairs policy, he has complained to friends that the Diefenbaker government is hurting western internationalism by overly nationalistic attitudes.

He believes there’s a swing away from Diefenbaker

Having become anxious to gain power, Pearson has at the same time become more optimistic about achieving it. This has been the toughest transition of all. Day after day, during the parliamentary session, Pearson has had to walk into a House of Commons awash with Conservative MPs. His band of Liberals, who could be squeezed into ten taxis, are outnumbered three to one in the green chamber, and only half a dozen of his colleagues ever make significant contributions to debate. Until recently, Pearson thought that the acre of mocking Conservative faces in the House was a true reflection of the country’s mood. Now. buoyed up by optimistic advisers, and trusting in his diagnosis of a national swing away from Diefenbaker, he feels that the federal prime ministership is within his grasp.

This itch for office has transformed him into a more ruthless party leader. After the by-election defeat in Restigouche-Madawaska in northern New Brunswick last May, he demanded explanations from responsible party executives in a tone which his diplomatic colleagues would not have recognized. It was also Pearson’s personal leadership which saved for the Liberals whatever credit there was for any party in the Coyne affair. He bluntly overruled much of the Liberal caucus which had advised him against standing up for a man who had been exposed as having agreed to the doubling of his already high pension. After the Coyne hearings proved that Pearson’s stand had been politically astute, the Liberal caucus was so delighted that members took up a collection and bought their boss an inscribed desk barometer.

Pearson is temperamentally prepared for the election campaign, and for the first time since he took over in January. 1958, he is fully in control of the Liberal party. “What we’ve finally realized,” says one of the Liberals’ shrewdest strategists, “is that in Mike Pearson we’ve got a dream candidate. We’ve stopped trying to persuade him to try out-Diefenbakering Diefenbaker.”

As hard as Pearson’s advisers are trying to make him into a big-time politician, they haven’t obscured his boyish love for sports which has always been part of the man’s uncalculated charm. Recently he was being driven to a Saskatchewan political rally by Jimmy Gardiner who was holding forth on the iniquities of the Tory agricultural policies. As they drove through a small elevator town, Pearson suddenly grew very excited and interrupted the rasping Gardiner. “That was Floral we just passed through.” he exclaimed. “Hey, that's where Gordie Howe was born.” ^ 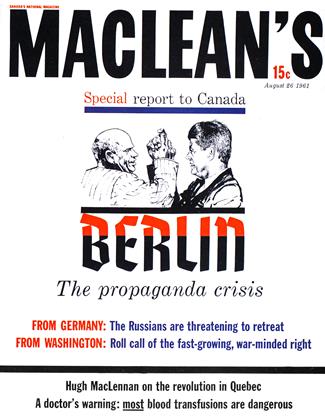