While U. S. Vice-President Johnson assured West Berliners that the West would fight to the death if their freedom was attacked and East Germany’s Ulbricht ordered his Chinese Wall doubled, and while Centurion tanks rumbled along the Kaiserdamm in the British sector, the Fourth Canadian Infantry Brigade Group in Westphalia, only 65 miles from the East German border, was getting ready for its annual twoweek field exercise on Lunenberg Heath.

Transport, stores and weapons were being checked out and plans sharpened for the mock battles that wind up the cycle of spring and summer training for Brigadier Cameron Ware’s 5.500 man force. Nothing noisy or rough was anticipated. Commanders were warned not to use even blank ammunition or thunderflashes in the vicinity of towns or villages and to keep out of cultivated fields and standing crops.

A few days earlier. Prime Minister Diefenbaker had announced that Canada would consider increasing her military contribution to NATO if that move seemed necessary. “Every consideration,” he had said, would be given to “any need that may arise out of the exigencies of the Berlin situation.”

There was no mood of exigency or urgency around Fort York, the base of the first battalion, the Canadian Guards, a few miles from the medieval walled town of Soest. Lieut.-Col. Bill Mulherin, the thirty-nine-year-old Guards commander, a stocky Irisher from Grand Falls, N.B., assured me that nobody was excited. "We’re professionals here,” he told me. “We know why we're here and we’re ready.”

Security is as tight as a kettledrum in the brigade—sometimes ridiculously so. In a Guards barrack room 1 asked a young Newfoundland private how many men were in an infantry section these days. With one eye on the army public relations officer who had insisted on coming into the hut with me, the soldier informed me politely that he was not permitted to discuss military matters with the newspapers. (I learned later that a Canadian reporter a while ago had been up to some subterfuge in trying to find out how many teen-age girls at the dependents’ high school were pregnant.)

I asked Colonel Mulherin how long it would take his battalion to be battleready if the balloon went up.

"Hours or minutes?” I pressed.

While no Canadian on the ground or in the air is yet equipped with nuclear weapons, the infantry brigade is trained in a manœuvre called “exploitation of a nuclear strike.” This calls for the determination, among other factors, to rush in and mop up the other guys while they’re still reeling from the shock. The fallout? That’s just one of the risks of war.

1 asked the officers if they considered their men reasonably well grounded in the political facts that have created the crisis in Germany. One man replied bluntly: “What would you imagine a kid of nineteen knows about those things?” But Colonel Mulherin told

me: “You’d be surprised at what they know. I was talking to a group of youngsters in the corporal's lounge and they were arguing most intelligently about the reasons for Canada devaluing the dollar.”

At brigade headquarters, situated almost on the bank of the Mohne Dam made famous by the bombing exploit of Guy Gibson, VC, 1 looked at the large-scale map that shows how our 5,500 soldiers and their 8,300 dependents have created a Little Canada in northwest Germany. In a 400-squaremile zone including the towns of Soest, Hemer, Werl. Unna and Iserlohn, the maple leaf has been the dominant military insignia since 1953. The Fourth Brigade, now consisting of the Guards, the first battalion Black Watch, the first battalion Queen’s Own Rifles. Third Regiment Royal Canadian Horse Artillery, the Eighth Canadian Hussars and supporting units, has been there since November 1957. Their garrisons, built and owned by West Germany, bear the familiar names of Forts Henry. York, Chambly, St. Louis, Victoria. MacLeod and Beausejour.

While the reporter gets swamped with official platitudes about how well the Canadians get along with their German neighbors, it’s my guess that (Khrushchov permitting) they'll go home after their tour of duty unmarked by their exposure to what is. by Canadian standards, a rich and ancient culture. Some German is offered at the high school level in the dependents’ schools. There are certain official hospitality get-togethers. A civilian employee of the brigade, now back in Canada, once told me that the Canadian kids don’t want to play games with their German opposite numbers; the Germans are too athletic for them, too competitive. Forgetting the exigencies, Little Canada might just as well be situated on the fringe of Camp Gagctown, N.B.

The other half of Canada’s front line —the four fighter wings of the RCAF NATO Air Division—lies two hundred miles to the southwest. Two of the wings are in France, at Marvillc and Grostenquin and two just inside Germany, at Zweibrucken and BadenSoellinger—twelve fighter squadrons in all, equipped with sadly antique Sabres and CFlOOs and with a courage and enthusiasm that makes light of the handicap.

While the world’s elderly statesmen say they don’t expect a shooting war, and forge ahead with their preparations for one, a certain young and brilliant pilot is calmly preparing to be the first Canadian in action in World War Three. He may be only nineteen. He is one of a select four hundred winnowed out of fifteen thousand applications for the most glamorous job of our times—the jet fighter pilot. He is paid between $750 and $850 a month. He is most likely still single, though with his smart sports car, well-cut uniform and daredevil air he cuts a swathe through the current generation of popsies.

Today and tonight he is on Zulu duty. The whole air striking force is by offi-

cial reckoning on a twenty-four-hour alert, 365 days a year, crisis or no crisis. But the Zulu planes would be first up. Night and day — CFlOOs by night and Sabre Mark sixes by day— two planes at each field are standing armed and ready to go. The Sabres are at the end of the runways and the CFlOOs (their radar is vulnerable to weather) in special Zulu barns. The leads from the battery starting carts are plugged in, the ground crews on the spot; the Zulu pilot is either sitting in his cockpit sweating it out or playing chess or bridge fully dressed. On a signal from OPs he will be Hying in three minutes, possibly two. I asked Air Vice-Marshall Larry Wray if this condition of constant readiness wasn’t a bit rough on the nerves. The Torontoborn Wray, a former test pilot now grey-flecked and ruddy at fifty-three, sat in an office in the historic Chateau Mercy Les Metz that would be the envy of any multimillionaire corporation executive. Wray has been commanding the air division for three years. “No, I don’t think the boys find it tough," he said. "Perhaps the best measuring stick is the fact that I haven’t had a case of AWOL for . . . well, it’s so long ago I’ve forgotten. We also have a re-enlistment rate of over eighty percent — double the American figure. We've built up a really professional team here, the envy of most of the other air forces.”

He pointed to a gleaming trophy on his mantel, the Guynemer trophy for supremacy in air-to-air gunnery. His crews have won it in each of the three years since it was presented, licking the Royal Air Force and the other NATO units.

taken since the Berlin boil began to fester again. "How can you improve on a twenty-four-hour alert?” he asked blandly. But it’s a fair guess that he and every one of his 6.0(H) subordinates in Number One Air Division would sleep better if the much-faster CFI04s would arrive from their Canadian factories to replace the Sabres. The new planes, an adaptation of the Lockheed F104. were first promised back in the summer of 1959. They can hit 1,400 mph. just double the Sabres’ speed.

Another fret must be Ottawa’s fencesitting record on the question of nuclear weapons. I doubt there’s a serviceman in Europe who thinks the Russians would stick to conventional weapons if, God forbid, someone finally forces a showdown. The politics involved in the apparent stalemate must seem somewhat unreal from the cockpit of a jet fighter screaming through the thunderheads over Europe.

The situation in Berlin is changing so rapidly that any prediction is risky, To a reporter in that powderkeg city it seems almost impossible that the Communist executive can without bloodshed quench the urge to flee that has moved a population the equal of British Columbia’s and Alberta’s combined.

Even so it was reassuring to find that the men in our front line in Europe are taking it all in their stride. As I drove into the air division headquarters in Metz, the parking lot in front of Larry Wray's office was boiling with boys in red shirts, black trunks and military caps. Were they members of the Canadian Youth Organization getting a steely taste of future duty? Heck no. They were the Shawinigan Falls Boys’ Brass Band touring Europe in a chromium plated bus. 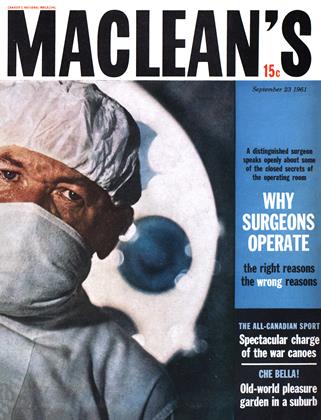