Why Paul Anka is everyone else’s favorite Canadian

Why Paul Anka is everyone else’s favorite Canadian

Among tournament bridge players, Eric Murray, a stocky, confident, 33-year-old Toronto lawyer, is something of an oddity. He neither writes about bridge nor teaches the game professionally, and he plays only three times a month. But he is in the world series. Last spring Murray qualified for the North American bridge team trials by winning the Vanderbilt Cup at a tournament in Denver. Last month in Houston. Texas, he earned the highest score in the trials— 96 points — by beating 30 of the top bridge players in the U. S. As a result, he became the first Canadian to win a place on the North American bridge team, which will compete for the world championship.

Murray started learning bridge in 1948 and now Charles H. Goren, the bridge w'riter and officially ranked number one player in the United States, rates him “among the very best bridge players in the world.” Murray keeps on top with what seems like scant practice, but the three times a month he plays are usually in tournaments. He has piled up 3.400 master points—they’re earned in tournament competition—which is more than anyone else in Canada has. The mental discipline of three tournaments a month is enough to keep his concentration sharp and he finds social games

of “kitchen bridge” a bore. “My friends,” he says, “are willing to play tennis with me.”

According to Mrs. Florence Hudson Johnston, a Toronto bridge teacher who is one of the few players Murray will sit down with for fun, his strongest assets are an analytical mind and the power of complete concentration (smoke-filled rooms and tournament tension don’t bother him). Murray agrees with this assessment but adds another asset; a courtroom lawyer’s working knowledge of psychology. He doesn’t think he has any weak points.

Next month Murray will rejoin his Houston partner, Charles Coon of Bos, ton. for the world bridge championship in New York. The six-man North American team will meet teams from Europe and South America, and the Italian team which has won the world title four times in five years.

The Italians use two spectacular and highly artificial bidding systems known as Roman and Neapolitan, which baffled all competitors when the Italians first put them into play. But Murray says most tournament players have them figured out by now'. His own bidding is a mixture of a British system called Acol with a Goren-style game. He calls it Colonial Acol. SHIRLEY MAIR 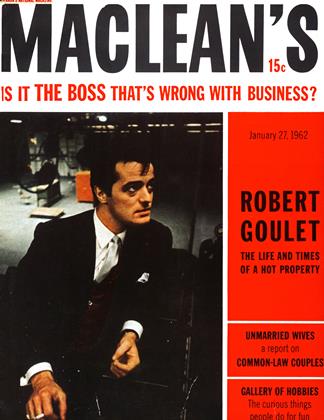