Why even the tolerant British don’t like us any more Leslie F. Hannon January 6 1962

Some of the cinema highlights our critic enjoyed

The zany basketball game in THE ABSENT-MINDED PROFESSOR, with Fred MacMurray’s hoopsters vaulting right over the net because of the gravitydefying “flubber” on their heels . . . Melina Mercouri’s epic bouts with culture in NEVER ON SUNDAY, and the same film’s engaging musical score by Manos Hadjikakis . . . The eye-filling Oklahoma “land rush” — but practically nothing else—in Hollywood’s remake of CIMARRÓN . . . The tooth pulling scene in THE GREAi IMPOSTOR, with Edmond O’Brien as the patient and Tony Curtis as the fraudulent “medical officer” . . . Tony Hancock’s monstrous sculptures and unshatterable self-esteem in CALL ME GENIUS,he’s the obscure London clerk who goes to Paris and becomes the celebrated founder of the “Infantile School” of contemporary art . . . In FANNY, the individually good perform-

ances and canny teamwork of two superannuated French glamor - boys, Maurice Chevalier and Charles Boyer . . . The vastly improved acting of Natalie Wood as the unstable Kansas girl in SPLENDOR IN THE GRASS and as the Puerto Rican Juliet in WEST SIDE

STORY . . . Also in WEST SIDE STORY, the introductory mile-high aerial shots of Manhattan, far more fascinating than the usual skyline view from the harbor . . . Rod Steiger as the brusque, warmhearted Irish psychiatrist in THE MARK . . . Stiff-necked John Mills’ tense war-of-nerves with rowdy, crafty Alec Guinness in the officers’ mess in TUNES OF GLORY . . . Trevor Howard’s portrayal of the embittered, affectionstarved coal miner in SONS AND LOVERS . . . Diana Dors’ wryly funny sketch as “General” Danny Kaye’s sexy army chauffeuse in ON THE DOUBLE . . . Fred

Astaire’s nimble one-up-manship over Tab Hunter, as gourmet and linguist, in THE PLEASURE OF HIS COMPANY . . .

Rosalind Russell as the middle-aged Jewish widowin A MAJORITY OF ONE . . . several astute performances in JUDGMENT AT NUREMBERG, especially Spencer Tracy as the chief American judge, Maximilian Schell as the German defense counsel, and Judy Garland as an Aryan Hausfrau whose friendship with a kindly old Jew led to his legal murder for “racial pollution” . . . Two highly auspicious debuts: George Chakiris as the lean, fanatical leader of the “Sharks” in WEST SIDE: STORY, and Stanley Baxter in a dual role as the apprehensive Scottish prisoner - of - war and the cruel German commandant in VERY IMPORTANT PERSON . . . George C. Scott in THE HUSTLER . . . Charles Lang’s photography in ONE-EYED JACKS. 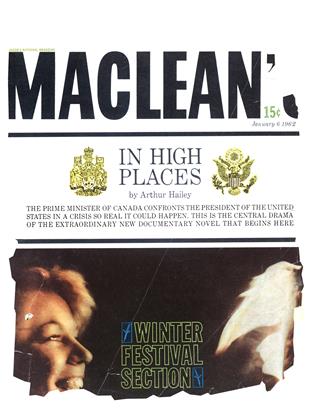