HERE IT IS OCTOBER, and Rudy Pilous, Chicago’s constant thinker, has not once been fired in the public prints as coach of the Black Hawks.

“It’s a terrible burden,” he confided the other day. “For three years the hockey writers have been firing me every couple of weeks. This year, not a peep, and the season’s started already. Do you suppose it’s an omen?”

The only two people in the entire world who have not fired Pilous over the last four years are James Norris and Tommy Ivan, a lucky coincidence for Pilous since they are, from left to right, the owner and the general manager of the Hawks. Indeed, this pair are so removed from reality that they gave him a $3,000 raise this fall, possibly assuming that he’s the man who announces attendance as 16,666 when the Chicago Stadium has a sellout.

Habit explains why the hard-thinking newshawks keep firing Pilous for an off-day story. Until he came along on Jan. 4, 1958, the Hawks had hired and fired 21 coaches in their 32-year history. In the 12 seasons prior to his acceptance of the job, the Hawks missed the playoffs 11 times. In his four full seasons since, he finished third each time, lifted the mortgage off the building, won the Stanley Cup once, and narrowly missed again last spring in the final against Toronto.

That one requires a certain unraveling, since Detroit didn't even make the playoffs.

“Precisely,” says Pilous. “When Stasiuk, a tough kid, got hurt, Detroit missed the playoffs by four points to the Rangers. That meant Toronto played the Rangers instead of Detroit in their semifinals while we were playing the Canadiens. We had a rough one with them. The Leafs had a picnic with the Rangers. The Wings wouldn't have beat 'em but they’d have bruised ’em to death. So when we played Toronto in the final we were pooped enough that they could shade us.”

“How about this year?”

“This year,” beamed Mr. Pilous, “we got a secret weapon.”

“Named AÍ MacNeil, of all people. I know Toronto had him. I know Montreal had him. But now we got him and if he does no more than sit on our bench and show up for practices, he's a giant. First day of fall training over at St. Catharines, it’s a nice hot day outside and everybody is taking it nice and leisurely on the ice when all of a sudden bodies start falling. I look around and it’s MacNeil, belting people.

“Pretty soon everybody forgets it’s a sunny day outside and we got ourselves a small tong war going. That’s the way it went all fall. Perhaps you recall . . .” Mr. Pilous permitted himself a small, malicious smile here. “Perhaps you recall we whipped Toronto twice in the exhibitions. They won’t forget that. We knocked the champs on their can twice, and I give the credit to MacNeil. He’s a real provoking fellah.”

This intelligence made no impression upon George (Punch) Imlach, who is in charge of every bit of thinking that goes on in Maple Leaf Gardens, give or take a thought-wave.

“I can beat Chicago,” said Mr. Imlach, a shy man who invented the collective I. “Only club I’m worried about now is the Canadiens and I won’t know a thing about them until I play them.”

“He can talk like that,” responded Mr. Pilous. “He doesn’t get fired all the time like you know who.”

G^” WHAT’S BEEN WRONG with Canadian football this year? On a plane the other day, going to Cleveland to watch the Browns play foot-

ball, Tex Coulter—the great ex-footballer who now writes and broadcasts in Montreal—offered an explanation. I confided to him, sotto voce, that I’d found Canadian football mighty dull this season.

“That’s what happens when the coaches grow cautious,” he said.

“When they grow what?”

“Cautious. They put the good players on defense to keep the scores down. The weaker teams still lose, but they don't lose big. In Montreal last year people felt the Alouettes had a pretty good team. They didn’t. They had 15 good ballplayers and that was it. Moss, the coach, played his good boys on defense. That kept the scores down. The Alouettes looked good enough losing to fool you. In fact, what they had was a fair defensive team. They finished last, you’ll recall.

“Clair docs the same thing at Ottawa. Agase tried it in Toronto. It was criminal over there to see a player of Rowntrcc’s calibre playing defensive halfback. I haven’t seen too much of the western teams but with the exception of Winnipeg, which has so much balance, I’d wager it’s the same thing.”

“Is this fair to the fans?”

“Certainly not. They don't sec the spectacle they’re entitled to sec at those prices. But when a coach has a loser he’s got to keep it respectable to sell those tickets.” 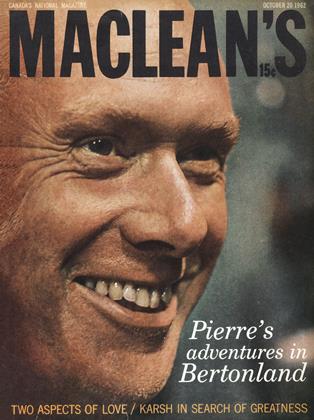