WITH RARE EXCEPTIONS, television’s sentimental “situation comedy” concept of marriage continues to dominate the man-and-wife stories Hollywood produces. The British and European moviemakers, however, have recently been focusing on the wedded state with a more clinical detachment, sometimes employing laughter rather than drama or tragedy as the framework for their observations.

Waltz of the Toreadors, for example, offers Peter Sellers as a retired general in Edwardian England, a snorting old goat who still pinches the scullery maids and dreams of a steamy romance with his clandestine French sweetheart (Dany Robin). The general’s wife (Margaret Leighton) is a shrewish hypochondriac. The family doctor (Cyril Cusack) is a humorist and a philosopher. The general’s aide (John Fraser) is a handsome young bonehead who instantly falls in love with the mademoiselle.

These, of course, are among the familiar ingredients of conventional boudoir farce. But Jean Anouilh’s stage play — transplanted from France to England in the Wolf Mankowitz screenplay — is just as sad as it is funny, and the transitions from slapstick pratfalls to sobering psychological realism are not always managed with sufficient finesse. There is a naked ferocity in one or two of the scenes between the general and his self-pitying spouse. Miss Leighton’s performance is both honest and accurate, and in my opinion it even over-

shadows the redoubtable Sellers. Once again, as with the snickering American hack writer he portrayed in Hollywood’s Lolita, Sellers turns in a series of virtuoso sketches and impersonations instead of a full-length characterization. Waltz of the Toreadors is a rather uneasy blend of discordant elements, although it has enough grace and swank and gusto to make it an agreeable entertainment.

Dangerous Love Affairs, a French export, now is circulating in Canada after showing in New York under its original title of Les Liaisons Dangereuses. Examined here is a marriage so “sick” that it seems to belong to a different world from Hollywood’s blurred domestic cartoons. The principals (Gerard Philipe, Jeanne Moreau) blandly encourage each other’s adulteries and compare notes after each fresh seduction. At its own jaded level the film is an adroit exercise in “continental” sophistication, weakened at the finish by a contrived and almost sanctimonious wrap-up: one of the sinners is dead and the other scarred for life by their avenging furies.

France’s busy and talented Jeanne Moreau also appears in The Night (La Notte), an Italian entry written and directed by Michelangelo Antonioni. The unhappy Milanese she depicts in this enigmatic tale has been married for ten years to a successful popular novelist (Marcello Mastroianni). Such is the extent of their disenchantment that she is able to read aloud one of his most eloquent longago love letters without even rippling the stagnant pond of his boredom: he doesn’t even remember the letter or guess that he wrote it. In the course of one long night of somewhat rueful depravity and introspection, the writer and his stale mate are forced to conclude that both love and lust have slowly vanished from their union, leaving only a kind of dim compassion and the mechanical civilities of strangers. La Notte has been put together with superb craftsmanship and is well worth seeing, though its underlying “meaning” — if any — remains cryptic at the final fadeout. 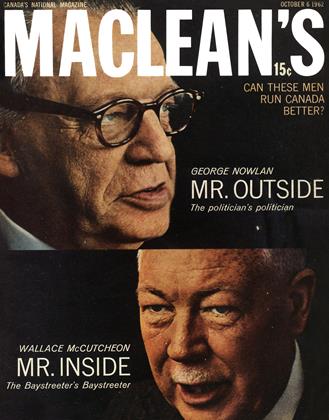