BREVITY as well as ribaldry characterized the 100 lusty tales which the 14th-century Italian author Giovanni Boccaccio neatly packaged in his celebrated volume, The Decameron. On the screen, Boccaccio ’70 is a three-part Italian production which asks the audiences of 1962 to imagine the sort of stuff the witty Florentine might be writing eight years from now if he were still flourishing in 1970. Regrettably, old Giovanni’s knack of compression is painfully lacking in the film, but the film’s gloating closeups of three international temptresses and the cynical bawdiness of its three long-drawnout stories have made it a box-office sensation on both sides of the Atlantic.

fSíf THE TEMPTATION OF DR. ANTONIO, first episode of the trilogy, was directed and coauthored by Federico Fellini whose previous fame rests on such achievements as La Dolce Vita and La Strada. A timely satire on prudery and censorship, it tells of a self-appointed crusader against immorality (Peppino de Filippo) who violently objects to an enormous “Drink More Milk” billboard featuring a gigantic color photograph of the Swedish sex-queen, Anita Ekberg. His frantic appeals to civic officials and religious dignitaries bring nothing but polite snickers and pious double-talk. As Dr. Antonio’s mind gradually sickens under the

strain of his campaign, the mountainous goddess seems to come to life and outrageously taunts him in a way that clearly accuses modern puritans of being sensualists at heart.

139* THE JOB, starring Germany’s Romy Schneider, carries the imprint of Luchino Visconti, who created Rocco and His Brothers. It depicts the collapsing marriage of a rich German girl and a corrupt, handsome young Milanese nobleman (Thomas Milian). The husband has been causing tabloid scandals by consorting with $1,000-a-night call girls and ignoring his spouse, although she herself is more alluring than most of his paid companions. Inasmuch as daddy’s fortune is the only source of the count’s easy funds, the wife forces him to listen while she outlines her sardonic solution for their dilemmas: he must begin paying her for her boudoir favors or else he must go to work like any grubby commoner.

139“ THE RAFFLE, directed by Vittorio de Sica, was scripted by his famed literary colleague, Cesare Zavattini. It presents Sophia Loren as a blouse-busting carnival girl who is persuaded to offer herself as the human prize in a Saturdaynight lottery. By the time she has been won by the least masculine man in town, she has become infatuated with a virile young peasant, yet her code of honor insists that she fulfill her contract.

There are some hearty chuckles in the film’s first and final portions, and the one in the middle is notably rich in photography and décor. But each story takes the better part of an hour to spin its yarn: and the totality, in my opinion, is quite a bit too much of a fairly good thing. 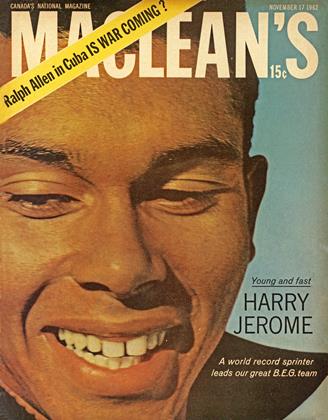