How do you go about spending $40,000 or so on a piece of sculpture for your new building? When the Canadian Imperial Bank of Commerce decided recently to buy some art for its forty-two-story building in Dominion Square, Montreal, it went for advice to Cleeve Horne, the Toronto portrait painter. Jn recent years Horne has become a part-time professional art adviser: he told Ontario Hydro to buy its famous Harold Town mural for the Cornwall dam, and he told Imperial Oil to commission the enormous R. York Wilson mural that adorns its Toronto headquarters. Horne advised the Canadian Imperial that for this setting — the plaza in front of the new building — the best in the world would be none too good. The best, in his opinion, was Henry Moore.

Last January Horne went to Moore’s home in Hertfordshire near London and watched him working on the model for a major new work, Three-Piece Reclining Figure. “It had a gutsy quality,” Horne says, “which I thought would offset the cool, clean lines of the building.” Horne ordered the first of the seven castings that were to be made, and it was flown to Montreal for the official unveiling last month. It turned out to be one and a half tons of bronze, nine feet long and five feet high. Neither Horne nor the bank would say what they paid for it, but Horne did acknowledge that Moore pieces of this size or smaller were selling these days for around $40,000.

As a publicity gimmick, Three-Piece Reclining Figure was kept entirely secret — not even a photograph was taken — until the dramatic unveiling. Unfortunately, the gimmick flopped: snow fell so thickly that photographers couldn't get a picture of it till the next

day and Mayor Jean Drapeau, in unveiling it, confessed that he still hadn’t had a good look. When asked for an opinion he hedged, as all wise mayors do: “I could see it definitely is modern art,” he said.

Dr. Evan Turner, the director of the Montreal Museum of Fine Art, was more definite: he said that not in one hundred years had Montreal seen such a distinguished new work of public sculpture. And certainly it seemed that Montreal — and the Canadian Imperial — had scored a major coup in the game of art patronage. Their new Moore is, easily, the most important single work of contemporary public sculpture on exhibit anywhere in Canada. RF

Two theatres have stopped talking about and started doing something about the old ideal of a truly national theatre in Canada. They are Toronto’s Red Barn Theatre, which is really in a library, and Winnipeg’s Manitoba Theatre Centre. What they're doing is sharing some of the production costs of a play they’ll present in both cities. The play is even older (though livelier) than the national-theatre ideal: it’s Mrs. Warren’s Profession by George Bernard Shaw.

Mrs. Warren’s Profession opened at the Red Barn early in November and starts its two-week Winnipeg run January 11. To cut moving costs, and because the MTC stage is much larger than the Red Barn’s, the MTC will design and build its own sets. Both theatres contribute to costs of costumes and such properties as parasols, a gun, a croquet set and, yes, monocles. It may not sound like an earth-breaking step, but the Toronto-Winnipeg experiment is the first time in Canada that tw'o companies from different cities have pooled their shaky resources to bring a play before an audience that’s bigger than either of them. Already, they’re discussing a trip by the MTC to the Red Barn. HB

Bassett the Publisher this year has forbidden the football writers on the Tely to enter or mention an annual football writers’ competition, sponsored by Dow brewery. This w'as because Dow dropped (and Labatt’s picked up) sponsorship of football telecasts on Bassett the TV Man’s station. These telecasts, in turn, involved the games of Bassett the Football Man’s Argonauts.

Bassett’s fourth hat, the hockey one, got involved in a more spectacular conflict recently, wffien a non-Bassett-man named Scott Young was suddenly removed from the CBC’s Maple Leaf hockey telecasts after five years as a sort of resident expert.

Young, it appears, had the audacity to write in his Toronto Globe and Mail column that recent discussions of a million-dollar deal between Toronto and Chicago for Frank Mahovlich w'ere, among other things, “hokum, bunkum, nonsense, sham and humbug.” Young pointed out that w'hile Bassett’s Telegram was front-paging renewed negotiations between the Leafs and the Hawks, Bassett himself was in Maple Leaf Gardens with fellow executives Harold Ballard and Stafford Smythe, drawing up an official statement rejecting the offer for Mahovlich.

After Young’s column appeared, those same three directors called another meeting. This time they got together with the sponsor and advertising agency for the hockey telecast that

until then had employed Scott Young. In a table-thumping session the Gardens’ directors demanded that Young be removed from the show. Which he was, forthwith.

At the same time, Young’s face was banned from an advertisement in the Telegram for radio station CHFI, selling the performers on its news shows. The same ad ran in other papers with Young’s picture; in the Tely, Young was replaced by another face.

When 1 called Hugh Horler, the relevant vice-president of the MacLaren advertising agency, he refused to comment on the Young television issue. Bassett also refused, loudly and profanely, and asked why people “are always phoning me for comment when things like this come up.” Harold Ballard (who attended the dump-Young meeting, according to an agency man) said he didn't know about any such meeting.

When Young was informed by an agency representative that his TV services would no longer be required he asked why. He w'as told, he says, that “you apparently have a talent for saying the wrong thing.”

“Such as what?” Young asked.

Young says he digested this, then commented: “I’m surprised that an agency as big as yours and a sponsor as big as Imperial Oil would back down to a third-rate newspaper publisher.”

Speaking to me, Young said: “I’d suspected Bassett was behind it all. This agency man’s reaction to what I told him made me know 1 was right.”

Young's fee (which amounts to $5,000 over the season) w'as still being paid two weeks after he ceased to appear on the telecast, and he had not been removed from the radio broadcasts of the same games, on which he still comments between periods. “Maybe,” he told me, smiling, “Bassett doesn’t know I’m on radio.” TRENT FRAYNE 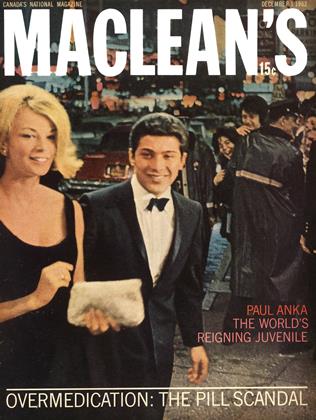