Left, right, or in between, Manitoba in Roblin's there first RALPH HEDLIN December 15 1962

DUFF ROBLIN dresses like a conservative and says he’s a Conservative. But sometimes he acts like a Liberal and talks like a socialist. “If it’s reactionary, it’s for the birds," Roblin once said. “We’re a party of the middle." Roblin’s “middle" is so big it spreads from the right down through the Liberal centre to the NDP left. Most Manitoba voters have felt that he gives them the best of all three worlds. And right now, barring some blazing new issue, it looks as if most Manitoba voters will feel that way again in the provincial election Dec. 14.

From any point of view, this is a propitious season for the premier of Manitoba. It’s been a year of good crops and good prices. Personal income is high and, by national standards, unemployment is low. Then there’s Roblin’s record.

In 1958 he became Manitoba’s first Conservative premier since his grandfather’s rule of 1900-15. With twenty-six of fifty-seven seats, Roblin the younger ran a minority government until the election of May, 1959, when his “new-look" Conservatives took thirty-six seats; the Liberals won eleven, the CCF ten. Since then, Roblin’s been spending money. He’s outliberaled the Liberals in almost every area of government. Even Roblin’s critics — and they include some purebred Tories — admit that his few years in power have been a kind of revolution in welfare services, public education, highways and municipal affairs.

But Roblin is too canny to campaign on his record alone; he knows what happened to Diefenbaker. He’s committing himself to a Five Year Plan with a faintly socialist ring: the start of a multimillion-dollar hydro scheme on the Nelson River; more jobs; planned industrial expansion; and farm programs to double livestock population in fifteen years.

At this writing, Roblin may be vulnerable — but not very vulnerable — at three points. The first is the Metro system that his government imposed on Greater Winnipeg two and a half years ago: since Metro, taxes on thou-

sands of Winnipeg-area houses have jumped fairly drastically (though Manitoba still has the lowest property taxes west of Quebec). The second may be taxation generally; Roblin’s unconservative “revolution" in provincial services has cost money and his promises will cost more. In the case of both these issues, Roblin has the classic answer: “Look at my royal commissions.” After the election, commissions will report on Manitoba’s tax structure and the Metro system. The third issue is public aid to parochial schools and it’s been so hot for so long that no political leader wants to talk about it. In fact, even the idea of talking about it sometimes becomes an issue itself, as Roblin found last month.

He was accused publicly of violating the three-partv gentlemen’s agreement that keeps the public-aid issue out of politics. The man who accused him was Joe O’Sullivan, lawyer. Liberal and Catholic. O'Sullivan said that the premier had made a secret deal to help parochial-school supporters and thereby gain a “narrow, partisan advantage.” Roblin said he didn’t know what O'Sullivan was talking about. I asked the premier if there hadn't been some fire to account for O’Sullivan’s smoke. All he could think of was an inconclusive cabinet discussion about extending to the separate schools the policy of free textbooks for public-school children. There’d been no decision, he said, and certainly no deal.

Roblin is Anglican and perfectly bilingual. He is believed to sympathize privately with the Catholic case but, even though a 1959 royal commission did favor state aid to separate schools, he probably won’t be saying much. Gildas Molgat, the amiable Liberal leader, is a Catholic, the son of a Frenchman; he likely won’t be saying much either.

The real competition in the days before Dec. 14 may be between Molgat’s Liberals and A. R. Paulley’s NDP for the title of official Opposition. Paulley’s ten NDP seats are nearly all from the loyal old labor district in the north half of Winnipeg and it’s unlikely he’ll lose any of them. He could push the Liberals into third place. Social Credit is discounted. Duff Roblin is pat. 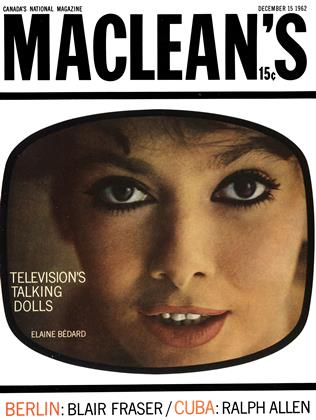