The fairly secret policemen on the trail of the OAS Leslie F. Hannon IN EUROPE February 10 1962

SANTA CRUZ DE LA PALMA, Canary Islands: Four Frenchmen stand silently at the window wall of the seventh - floor lounge of the Hotel Mayantigo looking north and east over the Atlantic. Behind them, the sun drops below the rim of Taburiente, the volcano that dominates this green pocket handkerchief of an island. The men look toward France, and they are waiting for the civil war to begin. The men are Pierre Lagaillarde,

The men are Pierre Lagaillarde, Joseph Ortiz, Antoine Argoud and Charles Lacheroy. With a dozen other leaders of the OAS — France’s not-sosecret right-wing military organization —they fled to Spain after the failure of the “barricades revolt” in Algiers two years ago or after the paratroop rebellion of last spring. These four—regarded as the leading extremists—were sent late last year by their Spanish hosts into “enforced residence” on La Palma, the most westerly of the Canaries. A ten-year prison term awaits the 33-yearold cx-MP Lagaillarde if he sets foot in de Gaulle’s France; the other, older three are under sentence of death.

After watching at close hand, and with sick fascination, the erosion of law and order in metropolitan France for the past year, I decided on the spur of the moment to hop the interisland plane from Tenerife on the chance of at least glimpsing the fanatical quartet who bear a major responsibility for the tragedy looming over France.

An aperitif with a second-rater

Half an hour after landing at La Palma’s tricky sloping airstrip I was standing beside Lagaillarde sipping a noon apéritif. Ortiz was pecking at a portable typewriter at a coffee table by the window, now streaming with torrential rain. Argoud stared at me over a pile of documents he pretended to be sorting. Dangerous men? I felt numbly that France was ill indeed if a bunch of second-raters like these were seriously rated as the stuff of revolution. An obvious cop (dark suit, dark glasses) joined us at the bar, his ears quivering, and another across the lounge toyed with a pile of magazines. It seemed that I had strolled in where others had hesitated to tread.

All passports are checked by the Spanish security officials on arrival after international journeys, so my trade was known to the central authorities on Tenerife. I was aware that the internees on neighboring La Palma were incommunicado to the press, but my tourism

of the previous week appeared to have been the right preparation for casually catching the interisland plane. At La Palma airstrip, a flustered civilian official warned me, in halting French, that I must not take photographs. I told him I had no camera and, indeed, no baggage, except my brief case. He stared at it hard, but didn’t insist that I open it.

The day that followed was the strangest, and in some ways the most amusing. I’ve spent in 23 years of journalism. Without ever once speaking to me, plainciothesmen (invariably in dark glasses, indoors and out) shadowed my every footstep, their garlic breaths hot on my neck. In the new and jazzy Mayantigo, where the four Frenchmen live, the cops pushed into the elevator with me, followed me into the washroom, trailed me up and down the stairs. In the streets of this small seaport, they worked hand-in-hand with groups of young khaki-clad soldiers. When I turned into a street café, I could be sure a soldier would be lounging at the doorway within half a minute.

Even so, the security was marvelously inept. For instance, when I jumped into one of the town’s few taxis to seek out Domingo Acosta, editor of the four-page island daily, the shadows couldn’t follow — no car. Later, by chance, I was again beside the redbearded Lagaillarde for ten minutes— out of police earshot this time. We could have exchanged any information or small object. In fact, I asked him if he was bored. The so-called pin-up boy of the OAS grinned and said it was not permitted for him to talk with the press. At lunch in the Mayantigo. I sat at the table next to the four traitors and, as they lingered over their wine. I could have taken a Sten from the brief case at my feet and carried out the Gaullist sentences on the spot.

I had found Editor Acosta eventually in the gloomy much-carved town hall. His paper was not permitted to mention the presence of the French guests at the Mayantigo—thus passing up the best news story on the island since Francis Drake’s squadron was routed in 1585. I asked Acosta if it would be really difficult for the internees to escape when the car-horns of Paris again start tooting Al-gé-rie Fran-çaise. “Impossible,” he said. The island’s one airstrip was always guarded; the movements of all boats in the archipelago were scrupulously checked. It was feasible for a small fast boat to reach Grand Canary from North Africa under cover of darkness but La Palma was too far from the

mainland for an unprotected voyage. That may all be true, but one remembers how easily General Raoul Salan, field commander of the OAS, escaped from house arrest in Madrid when les paras mutinied in Algiers last year.

From other sources I learned that all the internees’ mail is censored—-this is not officially admitted—and that they are not permitted to take outside phone calls. Every few days, a British, American or German newspaper editor, hungry for a headline, puts in a long-distance call to Lagaillarde. Callers are told by the central switchboard that he’s not available, just now. Eight security men are in the Mayantigo at all times anil another nine detailed for duty outside.

Why does Spain harbor de Gaulle’s enemies? It's a tit-for-tat affair—France gives refuge to hunted Spanish Communists. The countries exchange criminals but have no agreement covering persons charged with political offences.

The Frenchmen on La Palma don't lack funds. They pay their bills personally at the Mayantigo — ten dollars a day with meals. Ex-Colonel Argoud has his wife and two young daughters with him. They have local bank accounts and it’s a fair bet their balances are replenished with francs extorted from shopkeepers in Marseilles and elsewhere. French metropolitan police recently caught a group of alleged OAS extortioners in Nice. The news that Brigitte Bardot had refused to pay $8,000 after getting a threat note set Paris commentators speculating about how many other celebrities had actually paid up after receiving similar threats. In Algeria. some taxpayers have received OAS demand notes in the same envelopes carrying their official tax notices.

The manager of the Mayantigo surely has one of the world’s trickiest hotel jobs right now. He is Jose Del Rio, a tall pale fellow who understandably looks much older than his twenty-two years. He told me he couldn’t put me up—journalists are not permitted in the hotel. He chatted inconsequentially about his famous guests and added that the police would require him to report on our conversation. Del Rio’s previous appointment hardly fitted him for his present role—he spent eighteen months at Folkestone’s Grand Hotel amid crumpet-eating dowagers.

I had to keep reminding myself of the dire peril facing France as my day on La Palma ended in sheer farce. When 1 turned up at the airstrip to catch the return plane to Tenerife it was discovered that some booking fumble had

cost me my seat. A pompous, muchbraided airline official waved me away imperiously. This startled my nearest shadow into abandoning his reserve. Brandishing his arms and thumping the counter, he seemed convinced I had surreptitiously arranged a stopover. The Iberia man shouted back just as vigorously. Lagaillarde, who had also shown up at the airstrip, seemed both puzzled and amused. Anyway, the plane took off and back down the corkscrew road to Santa Cruz we all went.

Soon after our return to the Mayantigo. a noticeably paler Del Rio suggested I leave in the Gomera, the little night boat to Tenerife. In fact, he’d be happy to arrange the accommodation. This settled, I bought a round of drinks and even the cops began to thaw a little. Panic set in again when the Gomera, at the cargo-jumbled stone quay below, hooted her departure thirty minutes before the expected time. A mad rush to the quay in darkness and rain ensued.

In the van was Del Rio. shouting to the sailors rattling in the Gomera’s gangway; then myself, half-winded from stumbling down the interminable stone steps; then the gumshoes, panting along to make sure I got aboard. Strings of Spanish curses told of collisions between shins and packing cases in the darkness behind me.

In Paris that same night, things were not so quiet. Three plastic bombs exploded. It’s believed they were planted by the teams recruited by the OAS from among veterans of the French campaigns in Indochina and Algeria (the pay: $400 per outrage). One of the bombs wrecked the home of a journalist — Jean Daniel, of the left-wing L’Express. Other recent victims have included Françoise Sagan. Simone Signoret. Jean-Paul Sartre, a bishop, parliamentary deputies, foreign ambassadors.

A few days later the main Paris-area transmitter for the national broadcasting service was blown up and an attempt made to begin pirate OAS broadcasts from a sports stadium in the city. A pirate transmitter is being heard regularly, preaching rebellion against de Gaulle, along the Côte d'Azur. Two arrested generals in full uniform led an anti-de Gaulle riot in Santé prison and in the streets of Oran fifteen Muslims were kicked to death by gangs of young Europeans.

It seemed the four Frenchmen of La Palma might not have long to wait. * 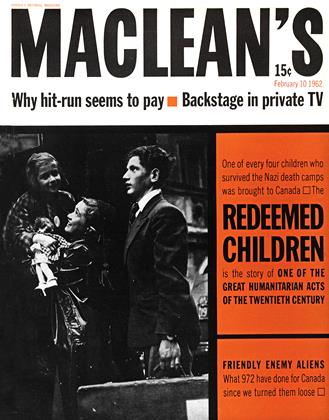