The Tories think the decisive votes are in suburbia Peter C. Newman February 24 1962

A party seeking re-election usually spends the closing months of its mandate plotting legislative measures aimed at that bloc of voters which in the opinion of its strategists will hold the balance of power in the final balloting.

Nineteen-sixty-two is no exception; exactly this kind of manoeuvring is now going on in Ottawa. The identity of the decisive electoral bloc has been divined with little trouble — though winning its votes may prove to be more difficult. According to the calculations of most Tory strategists in Ottawa, the ballots that will play the decisive role in the forthcoming general election will be cast by the suburbanites of Ontario.

The deduction of the Conservative planners is based on their tally of the number of seats they hope to win outside Ontario. Not all of the Tory braintrust agree on these figures, but one version gives the Diefenbaker party a likelihood of 83 seats in the other nine provinces, with the following breakdown: B. C.—nine (18 seats are held by Conservatives now); Alberta —eleven (17 now); Saskatchewan—eleven (16 now); Manitoba—ten (14 now); Quebec—twenty-five (49 now); New Brunswick—four (seven now); Nova Scotia—seven (12 now); P. E. I.—three (four now); Newfoundland—one (two now); N. W. T. & Yukon —two (one now).

If it turned out that the PCs could elect no more than this minimum number of MPs in the rest of Canada, then they would not be able to form a majority government unless they retained at least 53 of their current 63 Ontario seats. Historically, Ontario

has always been the mainstay of Canada’s Conservative party; in all of its eleven electoral victories since Confederation, it captured the majority of Ontario’s federal representation. Between 1945 and 1953, Tory MPs from Ontario averaged 69 percent of the federal Conservative contingent.

But this historic compact is now threatened by the suspicion with which Ontario Tories have always regarded national Conservative leaders from outside the province, especially John Diefenbaker, who behaves much more like a prairie radical than an Ontario reactionary. The provincial Conservative party which so significantly contributed to Diefenbaker’s 1957 and 1958 victories took a serious setback from the Liberals in the January 18 by-elections, and now has problems of its own to solve. Perhaps most significantly, a recent Gallup poll showed that of the 34 percent of Ontario voters who are undecided about how they’ll cast their ballots in the next federal election, two-thirds are former supporters of John Diefenbaker.

The Conservatives’ most pressing problem is how to win most of these votes back. Party strategists in Ottawa, attacking the problem, have divided the province’s population into three broad categories: rural, suburban, and big-city. Even the most pessimistic planners expect that the government’s agricultural program will help hold most of the rural areas. (A payment under the dairy stabilization program of about $40 millions, largely to Ontario farmers, is being planned to consolidate this vote.) The big-city voters are considered too diverse in their interests to be significantly affected by political persuasion. This has left the Tories scratching around for some way of giving Ontario’s suburban vote—which they feel is not yet set in any definite electoral pattern—a compelling reason to cast ballots for John Diefenbaker.

To do this, the planners are trying to fashion appeals to the four areas which the Conservative strategists feel are of greatest concern to the average Ontario suburbanite: better housing; less expensive higher education; easier commuting; and more recreational facilities. They have made a modest beginning: HOUSING: Since the Diefenbaker government took office, more than two billion dollars’ worth of NHA loans have been made for home ownership. Now, a tax exemption scheme to give added incentive for individual house construction (already in force in some European countries) is being considered, although vaguely as yet.

LEISURE: One of the most practical ideas that emerged from last year’s Resources for Tomorrow conference was a proposal to establish recreational areas near large population centres. They would complement Canada’s “wilderness” national parks policy by providing modest but useful sites for urban and suburban nature lovers to spend a day or a week end. Negotiations are expected to begin soon with the provinces on cost-sharing arrangements for these resorts.

EDUCATION: Federal action in this field is limited by the constitution, but the recent $9 million annual increase in Ottawa’s grants to universities is a beginning.

COMMUTING: Some thought is being given to applying the MacPherson Royal Commission recommendations as a reason for subsidizing railway commuter operations.

While this session’s Speech from the Throne touched on these areas only in an oblique way, it did carry forward Diefenbaker’s preoccupation with national development policies, which Ottawa Conservatives hope will appeal to the pro-Canadian instincts of Ontario citizens. The document’s thirteen spending measures (which call for budgetary and cash commitments of more than $750 millions) help to advance the somewhat jaundiced “vision” of the 1958 Conservative campaign into its second and third stages.

The first stage, meant to identify the nature of Canada’s natural wealth, included the Resources for Tomorrow conference, the multiplication of mapping operations and the establishment of the National Energy Board. The second stage, designed to make these resources more accessible, has included the Roads to Resources program and considerable northern railway building. It may soon be reinforced by announcements of a second trans-Canada highway and another cross-country oil pipeline.

In the third stage—which will be fully expounded by Diefenbaker in his forthcoming trip to the hustings —the emphasis will be on trying to multiply Canadian job opportunities by encouraging more rawmaterial processing in this country. The Throne Speech reference to a national power grid and the subsidization of industrial research are initial steps in this phase. The establishment of the National Productivity Council was another. A new national transportation policy may emerge out of the MacPherson Royal Commission recommendation; a $1 billion national development fund to supply more domestic risk capital is an early possibility. Manufacturing efficiency incentives, more accelerated depreciation arrangements for industries willing to make new products in regions of underemployment, and a longrange plan to overhaul Canada’s tax structure are being investigated. (One suggestion is to lower the basic corporation tax rate while eliminating depletion allowances, as a means of giving manufacturing firms a tax advantage over raw materials extraction industries.)

Another thread running through the Throne Speech, and one expected to be strongly amplified on the hustings, is the nationalism inherent in Diefenbaker’s appeal and personality. Proposed measures include implementation of the O’Leary Commission recommendations on magazines; repatriation of the Canadian constitution; changes in the Canada Shipping Act that will help Canadian-flag vessels; approval by Canada of the Universal Copyright Convention; and the revised version of the Disclosures Bill which will finally make known the precise degree of foreign control over Canadian corporations and unions.

Before the next campaign begins, Diefenbaker is expected to add at least one more measure to this list: the proclamation of O Canada as our national anthem.

Such nationalistic appeals are based on Diefenbaker’s recognition that Canada is not a biracial but a multiracial nation. From this premise he has distilled what is probably his least transitory political belief: that the multitude of ethnic groups in this country can maintain their individuality while holding a common allegiance to Canada and its parliamentary system.

He regards the greatest challenge to Canada neither as English-French co-operation, nor the difficulties of turning into real wealth the potential wealth of the Canadian Shield, but as the need to build on the upper half of this continent a northern nationality powerful enough to withstand absorption by the United States. In this passion Diefenbaker sees his place in Canadian history. * 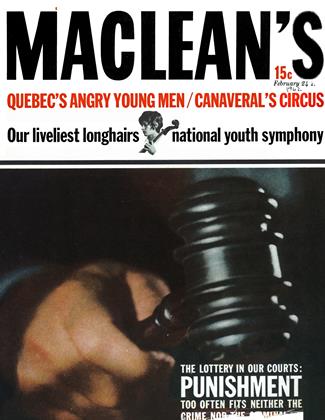