WHEN I JOINED the British Army in 1939 I grew a mustache. I attributed my motives to a combination of vanity and conformity. It seemed to me that a hirsute mass on the upper lip imparted to my timid, bespectacled expression a hint of martial cunning and ferocity. Furthermore I was gazetted to a lowland Scottish regiment in which whiskers were as traditional as the tightest of tartan trews. Finally 1 discovered that during the periods of boredom that alternated with the periods of fighting, the cultivation of a mustache offered a certain restful agrarian satisfaction. It was like pottering in one’s own portable garden and it made a change from messing around with the seven strips of adhesive tape that I used for securing my glasses firmly to my face during the blast and bluster of close-quarter engagements. My mustache, glasses and sticky tape gave me such a monstrous aspect that once, when I encountered three Germans unexpectedly in the ruins of an Italian wine press, they uttered a short, shocked yelp, and surrendered.

While I congratulated myself many times on the daunting qualities of my mustache it never occurred to me that back at the depot the psychiatrists were worrying about its size and shape. But they were, especially a Major Ci. R. Peberdy, MD, RAMC. now a consultant at the Newcastle Upon Tyne General Hospital.

AN ARMY PSYCHIATRIST HAS SHOWN ME . . .

In a recent issue of the Journal of Mental Science, Peberdy discloses that during World War II British officer selection boards found a marked relationship between the cut of a man’s whiskers and his suitability for commissioned rank. There was no significant difference between the percentages of clean-shaven and mustached men who were acceptable. But among the mustached group itself the density and shape of a man’s adornment were identified with striking personality traits.

The most likely officers. Peberdy found, were the men who sprouted “Bushy,” or "Handlebar” whiskers. These "Old Bill" types were dis-

tinguished by exuberance and intelligence. Although they tended to self-display they were not inclined to self-concern. They were able to “bind together” groups of men and they showed many other qualities of leadership.

Next on the list were the men who wore “Line” mustaches, or mustaches clipped in a narrow strip. Such Rudolph Valentino types, however, did have certain weaknesses. They were excessively interested in personal health and they demonstrated a high rate of hedonism, a frailty that is not easily adaptable to a life of bully beef, slit trenches and monasticism.

The men with “Trimmed” mustaches, or hairs covering the whole of the lip, had as wide a personality range as clean-shaven men and were not remarkable as distinctive characters. But those who boasted the “Clipped” or Hitler mustache were outstanding failures as officer material, though they were highly recommended as NCOs. They were of adequate intelligence and were not inclined to self-indulgence or self-concern. But they were “too limited in imagination, too little appreciative of the views of others, and unable sufficiently to bind together groups of men.” They were “faintly rebellious, energetic but prickly, precise to a fault and poor in aesthetic sense.” Peberdy says that during World War I they would have been known as "Drill Pigs.”

I find Peberdy’s conclusions disturbingly convincing. Looking at my bewhiskered features in photographs taken during the past twenty years I realize that my character has changed with the style of my mustache. 1 notice that in a picture taken of me in 1943—a few days after a bloody infantry battle in which an act of desperate self-preservation on my part was mistaken for a show of heroism—I was wearing a huge Old Bill mustache. Later snaps, taken when I was luxuriating in a staff job in Rome, show me wearing a Valentino or sensualist’s mustache. This remained on my lip long after my demobilization, in fact until shortly before my fiftieth birthday, when I decided it would be seemly to stop eating epicurean meals, drinking vintage wines and

plotting the seduction of beautiful women.

The effect of this moral reformation on my mustache has been remarkable. Without realizing why, I have been clipping it along lines that dangerously approximate the Hitler and Drill Pig type. Significantly enough my friends keep telling me I am becoming rigid, unimaginative, intolerant and prickly. Until I read Peberdy, of course, I thought they were just a bunch of yapping, prancing, hysterical poltroons. Now it occurs to me, especially after scribbling that sentence, that they might be right.

.. . THE REAL MEANING OF THE RAZOR’S EDGE

The fluctuating styles of my mustache indicate clearly that I am what Peberdy would call a Confused Personality. What’s more, I’m proclaiming my instability to the world by the trim of my whiskers. My problem now is what to do about it. I have no desire to be brave and Old Billish again, nor do I want to revert to the voluptuous Valentino days. I could transform my mustache into the meaningless trimmed type or shave it off. But trimmed and clean-shaven men, being vulnerable to all psychological frailties rather than a specified few, must be even more confused than I am.

A combination of Major Peberdy’s findings and my own psychological symptoms seems to suggest that there is no such thing as a man with a mustache; that there are only mustaches with men attached to the ends of them; and that it is the mustache that conditions the id, rather than vice versa. What wonderful prospects this opens up to the manufacturers of false mustaches: Old Bills, for giving courage to the faint-hearted; Valentinos, for charging the sex-starved with irresistable magnetism; Drill Pigs, for stiffening the backbones of the henpecked.

I suggest to Peberdy that he begin analyzing the types of men’s beards and such hair styles as the crew cut, the duck cut, the winged temples and the Kennedy crop. There's more to this hair-growing business than meets the eye. Its significance brings to mind those immortal words of John Masefield—"Spit brown, my son, and get a hairy breast.” ★ 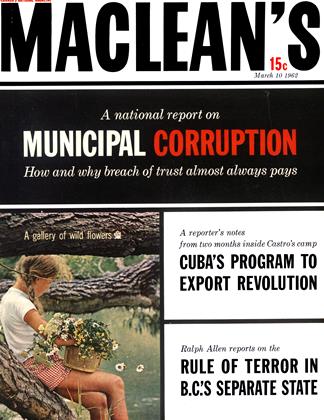