The deep-running desire of the British for a lasting peace is more unmistakable than ever this spring. After a generation of living on the brink of war. real and threatened, they are more than ready to meet halfway anyone who is talking peace. Equally unmistakable, though, is their determination to preserve what’s left of the far-flung martial glory of the British Raj.

This curious split personality has never been more apparent than it is right now. As the Geneva conference on disarmament approaches. Britons applaud Prime Minister Macmillan’s lead to the western alliance in responding warmly to Premier Khrushchov's overtures — even if they have some reservations about Soviet sincerity. At the same time, they’re chewing (with apparent satisfaction) their government's defense plans for the next five years, which include improving British capacity to wage nuclear war and a stubborn refusal to close down expensive military bases around the world.

Any interested visitor soon senses this conflict beneath the quiet and mannered desperation of the British. They certainly don’t seek peace at any price — their courage is beyond question. But the iron taste of war has been with them for more than a generation now. They see themselves as being on the fiiestep while they regard Canada, for instance, as being at a safer distance.

I have pointed out. in Whitehall conversations. that a Soviet missile can reach Montreal over the snows just as fast as another could reach Manchester over the Baltic. True, my friends say, but do we really think that if Khrushchov elects total war, he’ll try to knock out Canada first? Don’t we know, they ask, that Mr. K. has already boasted he holds England hostage against any threat from the West? They believe his threat is good too. They can quote an official government booklet: “It must be frankly recognized that there is at present no means of providing adequate protection for the people of this country against the consequences of an attack with nuclear weapons.” Why this fact is accepted here, and on the continent. without fuss by all parties, and why its implications are not fully accepted in North America, remains an international puzzle. Anyone building an atom shelter in his basement here would be regarded as potty.

But the British, at the same time, maintain their own nuclear striking force. They prefer to call it their independent nuclear deterrent. This consists of something more than one hundred giant jet bombers, each costing five and a half million dollars, that could get aloft in a minute and a half with payloads of free-falling, British-made nuclear bombs.

In the ICBM age. this is a Tin Lizzie force, but the British are doggedly certain that enough of their bombers would get through to play tit-for-tat in the holocaust.

Yet in the spring of 1962 the British don’t really want to talk of trading punches with anyone; and they’ve no

illusions about anyone winning the next war. With dry sarcasm, a young Oxford don said to me recently, "You see. we won the last war. Or did we? Our allies then are our enemies now. and we’re spending more money than ever before, presumably to defend ourselves.”

Last month this troubled people was sympathizing with the group of young hotheads who were jailed for eighteen months at the Old Bailey for sitting in the rain across the entrance to an American air base. Officially, they were charged with conspiracy under the Official Secrets Act — they had forlorn plans to sit on the runways of the secret base. They were members of Lord Bertrand Russell’s civil disobedience elite, the Committee of 100. which is trying to rouse the nation to discard nuclear weapons in the idyllic hope that the rest of the world will follow suit.

Wherever these Britons turn, there are signs of readiness for war. I live within an hour of central London, and on any fine day conversation can become impossible around the house as bombers of the U. S. air force trundle low' overhead on their mysterious missions. Urchins playing war in the hedgerow's fire pebbles at the planes from their slingshots. One of the nuns at the little school attended by my three daughters — a sweet old soul whose clear blue eyes arc the epitome of peace

— told me that when the bombers pass, and the four-century-old building trembles, she offers a silent prayer for peace. That adds up to a lot of prayer

— the school is on the flyway into the U. S. airbase at Greenham Common.

atomic research plant at Harwell. Across the tiny humpbacked stone bridge built in the middle of Newbury to bear coaches and farmers’ wagons, now thunder Centurion tanks and armored cars on their way to Salisbury Plain and the battle-training grounds of the southwest. They swerve past St. John’s Church which is still struggling with its mortgage — the trustees had to rebuild from the ground up when a flying bomb leveled their treasured pile in 1944.

Sophisticated Britons are well aware that observers abroad — to be more precise, mostly in Germany and the United States — fear Britain is edging toward neutralism, or even pacifism. 1 discussed these possibilities with a worldly and brilliant Scot who is very close to the government's policy group here. "May I remind you,” he said, “of Dean Rusk's recent observation. 'I wouldn't worry about the British, if 1 were you.’ Some Americans are always worrying about whether we have lost our nerve, but nobody's been able to push the British around for nearly a thousand years. The more they’re pressed. the more dangerous they are.” It might be relevant to add that the undergraduates of Oxford are as pacifist today as they were in 1939.

Against this background, the determination of the British to keep tip appearances as a world military power doesn't seem so contrary.

To many people it comes as a surprise to learn that Britain still has overseas bases. Didn’t they vanish with the Empire on which the sun never set? No, they didn't. Right now, about I()(),()()() British servicemen are serving abroad at bases strung across the world from the Far East to the West Indies.

Recently I glanced at a map on a wall in the Ministry of Defense and tried to count the pins marking British overseas headquarters, garrisons, naval and air facilities, repair shops and stockpiles. They were clustered too thickly in some places to allow an accurate count. The main ones, though, are in Germany, Cyprus, Aden, Kenya. Gibraltar. Malta, Libya. Malaya. Singapore and Hong Kong. Smaller outfits are at Gan, in the Maidive Islands, at Bahrein. in the Persian Gulf, and in the Caribbean.

Apart from simply “showing the flag.” what do these troops do? Those who favor keeping the bases — and that includes Defense Minister Watkinson and most of his service chiefs — could point to the swift dispatch of a force from Nairobi to Kuwait when Iraq’s Kassem had threatened a takeover. or to the more recent speedy arrival of Tommies in British Guiana to bolster the authority of Cheddi Jagan. The bases are also active proof of Britain’s readiness to back up her treaty obligations — Germany for NATO. Cyprus for CENTO, and Singapore for SEATO. They're also visible proof of an old dream still dear to many hearts — while those Union Jacks flutter over foreign fields. Britain hasn't quite ceased to be a world power. Support for these latter-day Rudyard Kiplings comes from a surprising source. Knowing that the British were reassessing the value of their foreign bases, U. S. Secretary of Defense Robert McNamara told the Senate that the U. S. strongly favored the British keeping land, sea and air forces "in a broad area of Asia.”

Although the bases have w'on another lease of life in this year’s white paper on defense, there’s little doubt their years are numbered. One of the first acts of new' nations is to kick out imperial forces, no matter how much they may need them for internal security. Already, the Arab League states refuse fly-over rights to British service aircraft, making costly and circuitous supply trips necessary. The Cyprus base would be untenable if the razor-edge political balance there swung left. If Singapore is incorporated in Greater Malaysia, its political leaders would not allow British forces based there to fight anywhere without Malaysian approval. Stability in Kenya seems a distant dream. The Hong Kong base exists, admittedly, on Chinese good will.

At home, the die was really cast when the Tories abandoned conscription. Although pay and allowances have been more than doubled in the last ten years, the army is now struggling to keep together a regular force of 165.000 men — an army the size of Bulgaria's. The British Army on the Rhine is chronically undermanned. In mobilized manpower, Britain stands only fifth in NATO ranks — behind the U. S., France, Turkey, anti Italy. Sir William Hayter recently stated that dropping conscription was “one of the most irresponsible decisions ever taken by any British government.”

Jf the British appear to be suffering from a split personality on defense, well, maybe the rest of us are too. Maybe it just shows more, here. ^ 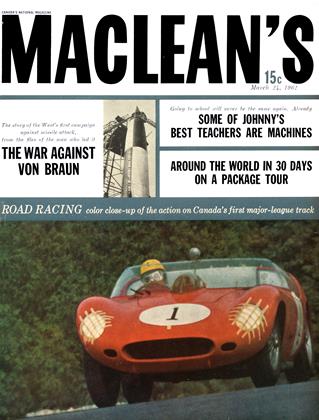