“There’s so much disenchantment with federal politics in Canada these days that anybody who could put together the anti-Diefenbaker, anti-Pearson and antiDouglas votes could sweep the country.”

That summary of the current political situation, as seen by one Ottawa political veteran, may seem overly cynical, but it does point to a cardinal fact about the forthcoming campaign: the man who captures the prime ministership will be the party leader most successful in attracting that phantom force known as the floating vote, which today has become larger and more fickle than in any other electoral contest in recent history.

Nothing is known for sure about the floating vote, except that it’s large enough to be decisive. From now until election day, all the parties will be spending the greatest part of their energies wooing the undecided voter—the battle for his allegiance will be the overriding concern of every candidate.

The despair of the poll takers, these citizens unafflliated with any of the political parties provide that narrow and shifting margin of ballots which really decides who wins a national election in Canada. Political strategists in Ottawa who have studied the behavior of this amorphous group in past elections, split them up into three main categories:

^ The “leaners” who can be counted on to be drawn jr.--.-trd one particular party once they get behind the curtain of the polling booth, but who for various reasons refuse to indicate their political preferences beforehand.

** The “independents” who have no regular party loyalties, and make up their minds strictly on the basis of the campaign itself.

The “indifferents” who place themselves outside politics, and usually end up by not voting at all.

Recent surveys by the Canadian Institute of Public Opinion indicate that the number of undecided voters has been rising steadily during the past twelve months. Nearly one third of Canadians now declare themselves to be in this group, compared with only 23 percent a year ago. T he typical undecided voter, according to the surveys, is a woman over fifty years of age, with little education and in the lower income group, who lives in or near one of Ontario’s larger urban centres.

A Gallup Poll breakdown supplied especially to Maclean’s shows that only four percent in the undecided group have a university education; less than one percent have annual incomes of $10,000 or more. About a third are over fifty; 54 percent are women. Only 13 percent of Canadian farmers haven’t yet chosen their party affiliations, but 41 percent of the floating vote live in the large cities or their suburbs. Ontario and Quebec lead in the number of uncertain voters; the national average of 31 percent is the highest since the Gallup Poll started investigating our voting habits, in 1945. Of those Ontario residents in the undecided group who voted last time, two thirds cast their ballots for John Diefenbaker.

No one can be certain, but it seems a reasonable assumption that a great number of the undecided voters may be found among those casting their ballots for the first time. Of the approximately ten million eligible voters in the next election, brand-new electors will include the roughly one million Canadians who’ve come of age since the last election, the quarter million immigrants who have received their citizenship papers since 1958. and the 80.000 Indians on reservations whose franchise has been extended by the present government.

All these groups have been courted by the national parties, none more strenuously than the new Canadians. Prime Minister Diefenbaker has been particularly active in soliciting the newcomers’ votes, although Opposition 1-eader Mike Pearson is planning to step up his ethnic campaign sharply before polling day. But there is increasing evidence that like the older Canadians, many of the postwar immigrants are becoming disillusioned by both the old-line parties. After the ethnic editors’ conference in Ottawa last fall, the editor of the Ukrainian Alovy Shliakh (The

New Pathway), a Winnipeg weekly, was referring to both parties when he wrote: “We have learned many lessons during 1961 that will stand us in good stead in the future. They will not keep promising us sweet biscuits in order that we might be good boys. We have grown out of the school desk.”

It’s impossible to get any meaningful indication of the political feelings among the men and women who have passed their twenty - first birthday since 1958, but the majority of those who arc at Canadian universities seem to favor the Liberal party.

T he Liberals have won sixteen campus elections in the past year; the Conservatives five, and the NDP two. The Liberals are currently supplementing this upswing of youthful interest by conducting private surveys in six metropolitan suburbs to determine the main interests and problems of the young voters.

The Conservatives have been successful in doubling the number of Young Progressive Conservative Clubs in the country during the past four years, while the NDP bases much of its optimism about gaining the vote of young people on a survey of the Peterborough by-election, won by Walter Pitman, in October, 1960. It showed that more than 80 percent of the voters in the 20-30 age group supported the 32-year-old Pitman.

In planning their campaigns, the strategists of the national parties naturally don’t ignore the decided vote—that core of Canadian voters w'ho would consider it treachery to vote against their party, regardless of the quality of its local candidate or the personality of its national leader. This is not to say that they believe most Canadians always cast their votes the same way in every election. But there is in this country a straight party-line vote which has shown remarkable statistical stability.

The Liberals were able to maintain themselves in power so long because they went into each election with about 40 percent of the popular vote, then increased it seven percent during the actual campaign. (In 1949, they jumped from 42 percent to 49 percent; in 1953 from 43 percent to 50 percent.) John Diefcnbaker’s great accomplishment of the 1957 campaign was to steal that seven percent jump from the Liberals; the Tories went into the campaign with about 31 percent, and ended up with 38 percent. Strategists of all the parties agree that it’s the ability to capture this seven percent of the undecided vote during the actual campaign that determines the results of the election. (Although the 1958 contest was a landslide and the shift of the vote during the campaign didn’t change the results, even then the seven percent rule almost held true. The Tories went into the campaign with 46 percent of the vote, and ended with 54 percent.)

Conservative strategists point out that despite the government’s declining popularity in the past two years, as reflected in the Gallup polls, the percentage of its appeal hasn't slipped below the 38 percent which once proved sufficient to form a Tory administration. Over-all percentages of the popular vote don't, of course, determine the party that forms the govern-

ment. Everything depends on the distribution of the votes. In the 1926 election, for example, the Conservatives got 200,138 votes in the three prairie provinces and seated only one MP; the IJberals (who had redesigned constituency boundaries in the 1924 redistribution) received 200,542 votes, but elected 23 members.

Although the 1958 election put 208 Tory MPs into the House of Commons — the largest group that any political party has elected in Canadian history — it’s a majority that rests on an astonishingly narrow margin. A shift of about 200,000 votes, properly distributed, could destroy the government’s majority.

Under this kind of theoretical redistribution of the ballots, it would only take one voter in forty-nine swinging from the Conservative to the Liberal party in the next election to bring down the government.

Voting patterns don’t, of course, behave in a manner so ideally suited to any one party, but this kind of statistical analysis does show that the Tory advantage isn’t quite as impregnable as it appears. About eighty of the Conservative seats in 1958 were won with margins of less than four thousand votes. The margins were narrowest in Quebec, where half of the PC’s fifty members came in with margins of less than two thousand votes.

Except for the 1953 election, when only 67 percent of those eligible voted, the Liberals’ victories in the five elections between 1935 and 1953 were based on a 75 percent turnout of the voters. John Diefenbaker’s 1958 triumph raised political interest to such a pitch that 79 percent came out to vote. No Canadian before him was able to elicit so much interest in politics from a group generally inclined to dislike and distrust politicians. The moral seems obvious: The man who during the forthcoming campaign can project the image of rising above party politics, will become the next prime minister of Canada. ^ 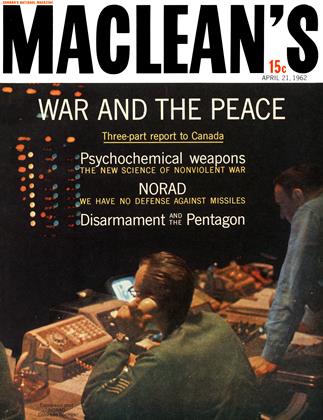